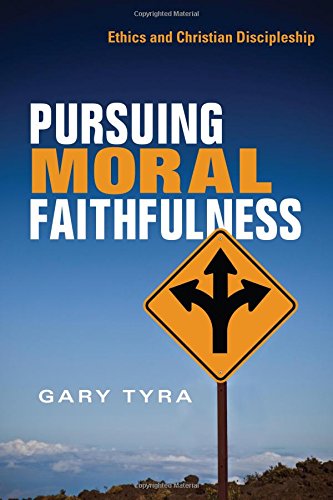 Gary Tyra is professor of biblical and practical theology at Vanguard University of Southern California. Tyra has nearly three decades of pastoral experience and is the author of six books mostly relating to themes within the fields of missions, discipleship, and moral theology. Tyra’s service within both the academy and church, as well as his publishing record, establish him as being well qualified to pen a volume entitled Pursuing Moral Faithfulness: Ethics and Christian Discipleship.

In the introduction, Tyra is clear about his aim in writing. He writes this book “is not intended to function as a comprehensive introduction to ethics. . . . [Rather, it is] a primer on Christian ethics that focuses on one very serious matter in particular: too many Christians making ethical decisions the same way as their non- and post-Christian peers” (p. 29). In short, Pursuing Moral Faithfulness is a book on Christian ethical decision making. More specifically, this book is an explanation of Tyra’s unique model of moral decision making. While it would be impossible to fully explain all of the nuances of Tyra’s suggested paradigm in a brief review, his approach rests upon the moral guidelines of Scripture and the moral guidance of the Holy Spirit. These two resources combine in the mature believer to create what Tyra terms “moral faithfulness,” which is proper Christian decision making.

Pursuing Moral Faithfulness consists of ten fairly balanced chapters that fall into two main sections. In the first section, comprised of chapters 1–4, Tyra reviews and critiques different ethical theories, ranging from utilitarianism to various forms of deontology. His purpose in these chapters seems to be to orient readers to the field of Christian ethics, as well as to highlight what he perceives to be the flaws with many of the available models of ethical decision making. In the second section of this book, comprised of chapters 5–10, Tyra gives an in-depth presentation of his own model and its constituent parts. This second section is the portion of the book that will interest most readers.

There is much to commend about Pursuing Moral Faithfulness. In fact, Tyra’s analysis and description of the poor decision-making skills and practices of many Christians is reason enough to purchase and read this book. Additionally, it should be noted that Tyra has taken great care to write a very readable volume. His prose is winsome and lucid, with the academic and esoteric material suppressed into content footnotes for those who want to investigate his ideas further. Clearly, Tyra did not write this book for others within the academic ethics guild; rather, this text is aimed at students and motivated laypeople in the church. Along these same lines, it is refreshing to see Tyra’s recognition that disciple-making and Christian ethics are complementary (if not synonymous) concepts. Indeed, Christian ethics cannot be practiced apart from character formation. These idea will resonate with most readers.

Certainly there are minor deficiencies in Pursuing Moral Faithfulness about which one may quibble—the occasional typo and the microscopic font in the book’s indices come to mind. But as to major drawbacks, there is just one matter to raise. This issue, which may not be a problem for some, relates to Tyra’s understanding of the work of the Holy Spirit in the life of a believer. Tyra writes, “It’s possible, through the Scriptures and the Spirit, to ‘hear’ the heart of God. . . . Christ’s followers should expect to interact with the Holy Spirit in ways that are real and phenomenal” (pp. 22–23). The issue here is that whereas evangelicals have traditionally held to the idea of the Spirit’s illumination of Scripture, in light of the doctrine of sola Scriptura most evangelicals have not endorsed the idea of normative, extra-biblical revelation. However, Tyra is clear that he is referring to the Spirit speaking through “Scripture, the community of faith and his still small voice speaking directly to the conscience” (p. 25). Tyra refers to this charismatic idea as “pneumatological realism,” and it is a key part of model of moral faithfulness. Readers with a more traditional understanding of the ministry of the Holy Spirit will find this idea problematic.

The above critique notwithstanding, overall Pursuing Moral Faithfulness is a useful book. While some may disagree with aspects of Tyra’s theological leanings, time spent reading this book is time well spent. While this volume would not be ideal for use in a basic ethics class—as Tyra himself alludes to—it would useful in a specialized course on moral decision making, in a small group setting, or for personal edification.