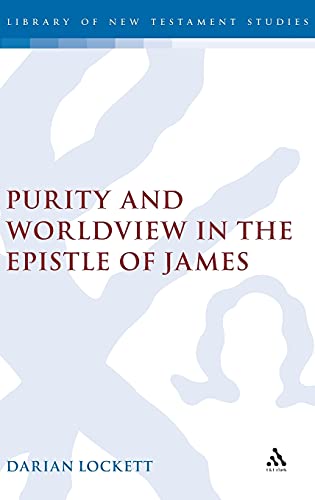 Purity and Worldview in the Epistle of James

Darian Lockett’s revised and published thesis on Purity and Worldview in the Epistle of James is a much-needed addition to the field of Jacobean research. Taking one very specific theme of the epistle, a theme crucial for the greater theology of perfection, Lockett helpfully untangles a great deal of the confusion surrounding the language of purity, particularly how one is deemed pure. In his introduction he raises the question of how purity language has been interpreted as either ritual or metaphorical purity, and then he shows how these simplistic categories have been (wrongfully) applied to the epistle of James. From there his first chapter is a lengthy discussion of purity language: the categories scholars have used to understand it and the methodologies used for determining how purity language functions. While insightfully critiquing other scholars, Lockett settles on two categories from Mary Douglas to apply to a reading of James: “danger from transgressing the internal lines of the system [and] danger pressing on the external boundaries” (p. 65). Next, he approaches the text of James with an extended examination of several critical issues in the epistle’s structure. He argues for the importance of reading James as a letter to a precarious Diaspora audience, highlights a correct reading of its paraenetical structure as a series of contrasts intended to motivate the reader to correct choices by walking the reader through the text, and ultimately highlights why Jas 1:2–27 should be read as an introduction of the key themes of the text.

This is where the book truly hits its stride, for Lockett walks the reader through the text to show the function of each passage and how it fits within a general theme of contrasting choices as well as how the text seeks to move the reader to the right choice at each point. Without overstating the case nor falling into the easy trap of a simplistic two-ways reading, Lockett argues that a driving motivation for James is perfection in contrast to double-mindedness, where perfection is “to display total and unvarying commitment to God and to do good works and develop the character prescribed by the ‘law of liberty’ and the wisdom from above” (p. 104). This perfection, however, is “directly affected by their degree of cultural separation from the dominant value system,” for purity is “directly affected by proximity to ‘the world’ ” (p. 105). This, therefore, is his justification for his focus on purity. From here, chapter 4 focuses specifically on purity language in the text, recalling his discussion of Douglas. While acknowledging that purity language is not necessarily common in the epistle, he shows how it appears at crucial times, relates to the language of friendship, and stands in contrast to “the world” (kosmos). From these textual conclusions, he is able to deduce that purity language in James is not ritual or metaphorical, but a specific type of boundary keeping from the influence of the world (which is itself the domain of the devil). As he puts it, purity language functions “as a figurative label for social/ideological location” (p. 120), revealing James’ concern to build a pure community amidst a tainting environ.

Having concluded that “purity is a necessary, yet not sufficient, condition in order to achieve perfection” (pp. 143–44), Lockett turns to the final question of whether this purity James seeks is sectarian or accommodating of the surrounding culture. Again, he avoids a simplistic answer, using Barclay’s three scales of “assimilation, acculturation, and accommodation” to help (p. 150). After examining the text’s depiction of audience, opposition, and author, Lockett concludes that James’s purity language functions to “persuade James’s readers to maintain (or create) firm value boundaries between them and the wider culture” at the points of “patron-client relations with the ‘rich’ ” and the “inappropriate and deceitful use of the tongue” (p. 183). It is these two points specifically at which the kosmos could taint his audience, and so it is at these two points that the author seeks not to create a sectarian divide for his audience but a wise separation from the surrounding culture.

Overall, Lockett’s book is well researched, readable, and highly informative. He takes several divergent discussions and integrates them into one coherent argument. If there is a weakness in this book, it is perhaps that Lockett sometimes spends so much space covering various fields in depth that points begin to feel like more of a literature survey than his own study. Occasionally, most likely as a result of this, the structure does not flow as the same text from James can be repeated several times or a tangential discussion intrudes on an argument. Those criticisms are slight, however, when compared with the clarity with which he introduces the social-scientific arguments, critiquing the imprecise ways people have dealt with the purity language in general as well as in James in a very helpful way for the person trying to get a handle on the language more generally. And one of the biggest strengths of the book is Lockett’s consistent emphasis on the communal nature of James, refusing to take an individualistic approach to moral purity. His balance of individual moral purity with the consequences of the taint of the kosmos on the community makes this book a crucial read not only for the James scholar but also for the person seeking to better understand the Christian life.