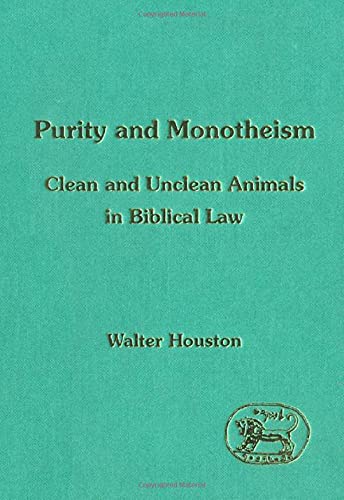 It has been remarked that a historian seeks to discover with infinite pains what any serving girl of the time could tell. Our ignorance of the food habits of the ancients illustrates this dictum admirably, and it is to Houston’s credit that he tackles positively and persuasively a subject that has generated a degree of discussion that dwarfs the information we have at our disposal.

The primary source of our knowledge relating to Israel is Leviticus 11 and Deuteronomy 14. Houston sets out the evidence for their internal complexity and suggests that the Deuteronomy tradition is based on an early form of the Leviticus tradition. But source criticism by itself cannot take us far, and so there follows a useful survey of the various types of explanation of the dietary laws, none of which has proved satisfactory by itself. Instead, Houston suggests that the laws require us to take into account all relevant factors, environmental, cultural and geographical. He goes on to survey the sparse information we have about the attitude to food and the practice of sacrifice in the ancient world. The valuable aspect of this treatment is the way in which Houston seeks to relate the fragmentary texts to the more material fragments uncovered by archaeozoologists (a rare species interested in the analysis and interpretation of animal remains found in excavated tombs and rubbish tips). The result is a cautious yet persuasive portrait of diet through the centuries.

And what about that infamous denizen of the animal kingdom, the pig? While we find the animals we would expect throughout the region (primarily sheep, goats, cattle), there is a marked decline in the number of pigs in Israelite settlements. Houston builds a persuasive solution to the complex role that the pig played. For one, the Israelites, with a background of pastoral nomadism, would not have kept pigs. But why was this aspect of Canaanite culture singled out for emphasis? The evidence suggests that the Canaanites were happy to eat pork, but only used pigs for sacrifice in abnormal situations, such as offerings to underworld deities. Drawing on anthropological insights, Houston proposes a basic threefold classification of animals: domestic animals that are clean and may be sacrificed, unclean wild animals that are associated with violence and destruction and are not sacrificed, and animals such as dogs and pigs that are neither fully domestic nor wild. It is the ambiguity of the last class that enables them to be powerful symbols. The final step of the argument is to relate the absolute prohibition of eating, not just sacrificing, the pig to the distinctive Israelite understanding of God. The development of a classification system that declared pigs to be supremely unclean cut off the possibility that they could be used to contact the realm of the dead. Israelite monotheism is safeguarded by the distinctive profile of the Israelite purity laws.

With the general lines of interpretation clear, Houston returns to the texts and relates differences to the setting and theology of the priestly and Deuteronomic traditions. These differences arise not so much from divergent datings as from different responses to challenges to the integrity of Yahwistic monotheism. A valuable final chapter discusses the implications of the study for the NT and for a Christian understanding of the purity laws. The abandonment of the concept of ritual purity was necessary for the fulfilment of the universal mission of the church, although a strong moral understanding of purity remained. But Houston rightly stresses how much was lost in the process, and the church can learn a great deal from an approach to life that takes the ritual and symbol character of daily life seriously.

This is an impressive volume, ranging confidently over a wide range of the disciplines that now inform biblical studies—history, archaeology, source criticism, anthropology and theology. The problems of methodology and interpretation of limited data are recognized, but they do not sidetrack the course of the argument. And unlike many products of the academy, Houston’s Christian commitment emerges. Starting from an apparently marginal law we find ourselves confronted with some of the most significant theological and practical issues that face the church as it seeks to fulfil its mission. While much of the recent interest in the OT has been in the narrative, this volume shows the fruitfulness of looking at the legal portions.

Although this is a sophisticated and demanding book, it is recommended not just to OT specialists, but to anyone who wishes to explore in detail how the people of God can respond to a pagan culture. And who knows, the next trip to the supermarket might be a good place to start!