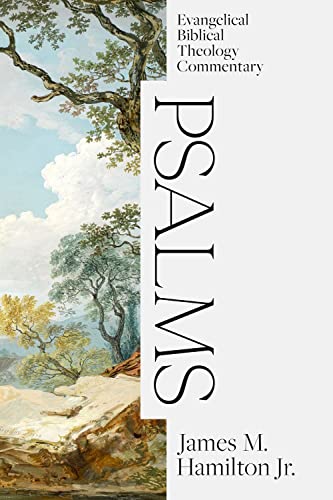 Having completed doctoral work on the Psalter, I am frequently asked to recommend a “go-to” commentary on the Psalms. My answer changes frequently and always carries qualifications. Kidner is Christ-centered but too brief (Psalms, TOTC 15–16 [London: Inter-Varsity Press, 1973–1975]. Goldingay is detailed but too reticent to acknowledge messianic impetus (Psalms, BCOTWP [Grand Rapids: Baker Academic, 2006–2008]). VanGemeren provides a quality one-volume commentary but is too keen to identify chiasms (Psalms, revised ed., EBC [Grand Rapids: Zondervan, 2008]). deClaissé-Walford, Jacobson and Tanner are helpfully provocative but too frequently suggest emending the MT (Psalms, NICOT [Grand Rapids: Eerdmans, 2015]). Hamilton, however, offers a fresh treatment of the Psalms that maximizes all that is good about the above and minimizes—for the most part—all that is not. This is now the commentary I will recommend.

Lexham’s Evangelical Biblical Theology Commentary series endeavors to locate each biblical book within redemptive history and illuminate its unique theological contribution. It claims that the primary contribution of each volume is a “thorough discussion of the most important themes of the biblical book in relation to the canon as a whole” (p. xxvii). Hamilton ably accomplishes this aim. He summarizes the whole commentary this way:

Every individual psalm is a masterpiece, and these individual treasures have been carefully arranged to resonate in relationship to one another, to harmonize when heard together, to echo when their architecture is considered, to reprise and retell as they prophesy and prefigure, and the symphony not only makes its own incomparable music, it sings the story of the rest of the Scriptures as well. (p. xxix)

Four features commend this work. First, Hamilton explicitly treats the Psalter as a carefully organized collection—a unity. He explains, “This commentary seeks to interpret the book of Psalms as a book, that is, as a purposefully ordered collection of poems that build on and interpret one another” (p. 3, emphasis original). While this conversation has been ongoing in the academy for four decades, it has not quite filtered down into popular literature on the Psalter—which remains largely consumed with form criticism. These volumes are a significant step towards making the conversation about the canonical shape of the Psalter more accessible. The 88-page introduction further details and defends Hamilton’s approach. Second, Hamilton makes some bold translation choices which, although unconventional, appear justifiable: “Choirmaster” (למנצח) becomes “Preeminent One” (pp. 37–39); “sing praise” (זמר) becomes “psalm”; “offspring” (זרע) becomes “seed”; “anointed one” (משׁיח) becomes “messiah”; “forever” (עולם) becomes “age”; and “enemy” (איב) becomes “enmity,” in homage to Genesis 3:15 (pp. 69–70). The purpose of these often-awkward translations is to aid English-only readers to see intertextual links more easily. I think this purpose is achieved. Third, Hamilton has a keen eye for canonical connections, both within the Psalter and across the canon. His instinct to permit Scripture to interpret Scripture and expose for readers the full extent of intertextuality is admirable—and a natural outworking of his high view of Scripture, which in turn results in Hamilton taking the superscriptions seriously. Fourth, each psalm is addressed from several helpful angles:

I found Hamilton’s treatment of psalms under these headings satisfactory, although he references scholarship more sparsely here than in the introduction.

Despite my positivity, I have two reservations. First, there is virtually no discussion on genre or poetic features. Indeed, it is completely absent from the introduction and only sporadically mentioned in the body of the commentary. Commenting on Psalm 1, for example, Hamilton writes: “The psalmist does not say it this way because that is not how concepts are communicated in poetry” (p. 96). The reader, however, is left to turn elsewhere for further explanation of Hebrew poetry. In fairness, Hamilton explicitly states that his focus is the biblical theology of the Psalter—but understanding how Hebrew poetry works is fundamental to understanding the Psalter. To my mind, this is a significant omission and thus weakens the work. Second, Hamilton discerns chiasms in almost every psalm, each book, and the Psalter in its entirety. The chiastic structuring of psalms remains largely unconvincing to me, especially when applied to most psalms, and is perhaps linked to an absence of engaging adequately with poetic features in the expositions.

In sum, Hamilton has produced a landmark commentary on the Psalms. It is by no means the last word, but by placing each psalm in its canonical context Hamilton is introducing the wider Christian community into the conversation concerning the Psalter’s shape. (I have a similar aim in my brief article, “Seeing Christ in the Shape of the Psalms,” TGC, 6 April 2021, https://www.thegospelcoalition.org/article/seeing-christ-shape-psalms/.) Indeed, Hamilton models what preaching the Psalms in their canonical context might look like. For this distinctive contribution, then, these two volumes should now be the minimum for the preacher’s library on the Psalter.

Davy Ellison holds a PhD in OT biblical studies from Queen’s University, Belfast and serves as the director of training at the Irish Baptist College, Moira, Northern Ireland.