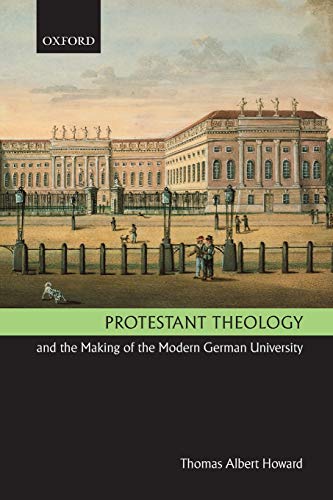 Protestant Theology and the Making of the Modern German University

As the title suggests, this work offers a reading that should be understood on two levels; on the one hand Thomas Howard indicates that this study is an exercise in intellectual history and, on the other hand, it is an interpretative foray into the history of Christian theology (p. 39). Few books can be found that offer a reading of nineteenth-century German Protestantism and its university milieu and even fewer are able to combine quite so competent a presentation of both as one finds in this book. Its theological value consists in its ‘attempt to shed light on and raise questions about a set of institutional and intellectual developments of abiding significance for understanding the place, predicament, and promise of Christian theology today in the vast and churning ocean of contemporary culture’ (p. 39).

The reader will quickly realize that the scope of this piece extends beyond the German context and includes, as seen in the second chapter, a highly detailed analysis of the state of the theological faculty in nineteenth-century Germany as related to its patrimony in the Middle Ages. The description of medieval notions of knowledge as scientia and the post-Enlightenment practice of Wissenschaft is invaluable. By this point Howard has in his introduction already provided a clear presentation of Wissenschaft, and although the term does not lend itself easily to English translation, one should avoid restricting its definition simply as ‘science’. Howard suggests that we better understand this multilayered term when we take into account its idealist beginnings in the late and early nineteenth centuries. Quoting R. Steven Turner, the author notes that early nineteenth-century idealist conceptions of Wissenschaft are characterized ‘not so much as science per se but as a set of beliefs or an ideology about science (Wissenschaftsideologie), a devout faith in the mind’s duty and capacity to enquire into and represent the basic essence of things, and through such activities to improve human character (Bildung)’ (p. 28). From here, Howard tracks the development of the definition of Wissenschaft, particularly as Immanuel Kant extended his argument that the department of philosophy should assume pride of place in the academy over against the department of theology, leaving the latter with the status of ‘trainbearer’ instead of its previously held position as ‘torchbearer’ (pp. 121ff.).

In chapter three Howard turns his attention to the University of Berlin as the first European university that was founded under purely national and secular auspices, ‘bearing’, he explains, ‘the imprimatur of neither emperor nor pope’ (p. 130). Securing more distance from the assumed strictures of its medieval heritage, the presence of theology became more superficial and its influence more negligible. Emboldened more by the twin ideals of Wissenschaft, the work of the academic was ‘to be nourished in an atmosphere of teaching and learning freedom (Lehr-und Lernfreiheit)’ (p. 131), which can basically be read as less interference from confessional structures. Friedrich Schleiermacher is the primary resource to whom Howard turns for better explicating the vision of the University of Berlin, and although Schleiermacher might appear to be an obvious choice, his prominence here introduces an element of irony into the story. As Howard explains, ‘It is a remarkable fact that a theologian proved to be among the most influential figures in founding a university best known for its scientizing and secularizing influences’ (p. 133). Schleiermacher’s strategy of putting in place the best faculty possible was governed by the aim of hiring professors whose scholarship and teaching would demonstrate to ‘religion’s “cultured despisers” the contemporary relevance and intellectual credibility of theology’ (p. 193). Ultimately, to confer legitimacy on theology meant that theology had to reflect the current standard of knowledge, that is, Wissenschaft.

Chapter four details the shifts in the relation of Church and State following the Prussian Reform era, inaugurated after the momentous events surrounding 1806. In addition to these reforms, the central factor in this changing relation is derivative ‘both directly and indirectly from prevalent currents of German idealism’ (p. 224), the result of which promotes more of an Erastian relation, wherein churches functioned as organs of state bureaucracy, rather than a relation in which religion exercises its own independence.

Chapter five is the largest in size and it is here that Howard demonstrates the reach of German academic theology which extends far beyond its own borders. The theological faculty’s passage into modernity is one most aptly described as ‘Janus-faced,’ an expression the author believes best helps ‘convey both the scholarly virtuosity attained by Protestant academic theology in the nineteenth century and also theology’s diminution (and near eviction) in the context of the expanding and modernizing university system’ (p. 403).

Howard’s concluding remarks include a fascinating thought-experiment wherewith Harnack is interrogated by the theology of the patristic period—the very sources and figures for which his own research is so renowned. The contrast drawn out is, as one would expect, a very telling one. Where theology in the early church was largely a way of reading Scripture ‘that furthered one’s spiritual advancement and thereby contributed to the life of the church’ (p. 406), Protestant theology in nineteenth-century Germany was led and ultimately redefined by the strong impulse of Wissenschaft. The importance of this piece derives not only from its precise historical analysis and deft presentation of the material, but also from the questions it asks of the current state of theology, especially as it is practiced in the separated precincts of biblical and systematic departments. Aside from the fissuring of theology into systematic, biblical, historical, and practical subdisciplines, the bigger issue is the continuing presence and acceptance, whether recognised or not, of wissenschaftliche theology within our own Anglo-American seminaries and divinity schools.