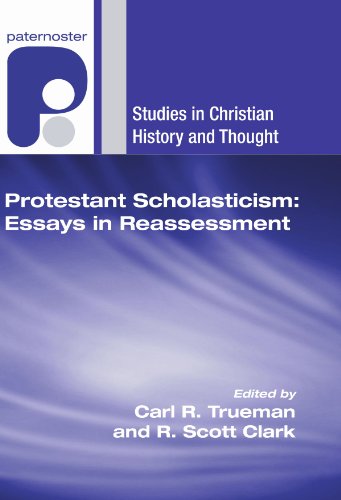 In the second half of the twentieth century there was a substantial body of scholarship that emphasised the contrast between theology of the early Reformers and that of the later generations of Protestant orthodoxy, which lapsed into scholastic methods. On the Reformed side the contrast between Calvin and Calvinism (to the detriment of the latter) was stressed by scholars such as Basil Hall, the Torrance brothers, Brian Armstrong and R.T. Kendall. As the century drew to a close, however, a reaction set in and the Protestant scholastics have had a much better press. Richard Muller is one of the leading figures behind this reassessment.

The present volume is a collection of eighteen essays by a wide range of leading scholars in this field. The volume falls into five parts: (1) Luther and Calvin; (2) Early Reformed Orthodoxy; (3) The British Connection; (4) From High Orthodoxy to Enlightenment; (5) The Rise of Lutheran Orthodoxy. Thus the volume as a whole traces the roots, the rise and the decline of Protestant scholasticism. The papers are on average sixteen pages long and generally focus on specific questions, but the overall effect of the volume is to give one a good feel for the movement as a whole. This is not, however, a book for beginners but presupposes a broad knowledge of the period. Taken as a whole the papers argue strongly against the crude model of decline and betrayal by the Protestant scholastics. In its place they argue not that there was no change at all, but that the picture is far more complex than once was thought. For example the reception of Aristotle involves far more than merely accepting or rejecting him. Peter Ramus, for instance, did not so much reject Aristotle as offer an alternative and modified tradition of Aristotelianism.

Thanks to several decades of careful scholarship (well documented in the Select Bibliography) the era of Protestant Scholasticism is today much better understood. This is to be welcomed. The case for continuity has been well put (in this volume as elsewhere) and the crude caricature of decline and betrayal can no longer be sustained. Care needs to be taken, however, lest the pendulum swing too far in the other direction, lest the genuine changes that took place be forgotten in the concern to emphasise continuity. At least one thing has changed significantly. The Protestant scholastics have been studied carefully and future assessments of the process of development no longer have any excuse for not being based on reliable accounts of the different figures involved. The present volume contains a substantial and useful quantity of such reliable accounts. For those with an interest in this topic it is a ‘must’.