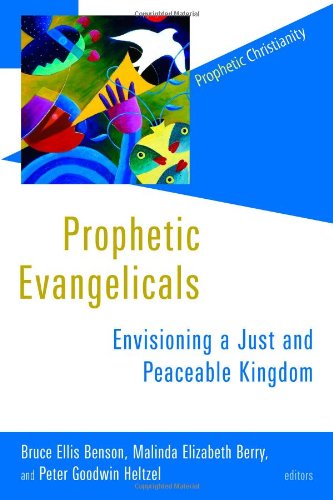 In this inaugural volume of the Prophetic Christianity series, diverse voices from across the theological spectrum present a vision for taking the gospel of Jesus Christ seriously. For that is what professing evangelicals are, or at least who they claim to be: people fully committed to the gospel. Tragically, however, evangelicals have at times reduced the gospel to individual salvation, corrupted the gospel through alliance with political agendas, and contradicted the gospel through practices and lifestyles of colonialism, racism, and consumerism. Others have understood and demonstrated a full-orbed gospel, the good news that Jesus is the Christ, the Savior and the King of the universe who forgives sins, inaugurates a peaceful kingdom, and makes all things new by his Spirit. While the claim to the term “evangelical” is held by a number of individuals, and is even viewed as unhelpful by some, the contributors to this volume claim the title prophetic evangelicals because of their commitment to a gospel that challenges the powers of this world, bringing the healing, freedom and reconciliation of shalom and empowering the people of God to live for justice. Some readers still may question, however, whether every contribution in this volume can be properly designated as “evangelical.” Would it have been better for the editors to drop the evangelical label and simply give this book the title Prophetic Christians to match the series title? We will return to this question after offering a summary of how the book portrays prophetic evangelicals (PE).

In the first three chapters, the editors provide an introduction to PE and their commitment to a “just and peaceable kingdom.” They identify several roots and catalysts for PE including the new evangelicalism of the 1950s and its break from fundamentalism, the civil rights movement of the 1960s, and key coalitions and documents of the 1970s fusing personal and social transformation, including the Declaration of Evangelical Social Concern (1973) and the Lausanne Covenant (1974). Key figures for the new generation of PE include Ron Sider, John Perkins, Jim Wallis, Karl Barth, and John Howard Yoder, but if PE claimed a patron saint, it would be Martin Luther King Jr. Each contributor to this volume begins their thematic essay with a personal reflection on their experience within evangelicalism. Many admit to being burned by an evangelicalism where faith was either privatized or politicized. As a result, some identify as “recovering” evangelicals, having tried the full gamut of evangelical-liberal options and found the entire spectrum wanting. What unites these essays, therefore, is a desire to articulate a more world-encompassing, boundary-shattering, justice-pursuing expression of evangelical faith and practice. Rather than summarizing each contribution individually, it may be more beneficial to delineate four key characteristics of PE emphasized throughout the book, drawing on examples from individual essays along the way.

First, PE embrace a missional/liberationist logic. The argument is that if Jesus came to proclaim and demonstrate liberty for the oppressed (Luke 4), then followers of Jesus have the same mission. To participate in this mission means to fight against injustice and fight for liberation of the oppressed. PE argue that since God is on the side of the “least,” the church of God should be a people who “embody an ethic of radical neighbor love with particular focus on the least of these” (p. 48). As such, PE understand mission to include the proclamation of the gospel and the demonstration of the gospel through lifestyles of liberation. Whether in the area of racial reconciliation (John Franke), military torture (David Gushee), or the Native American struggle (Raymond Aldred), these authors believe the gospel must lead to embodying its radical implications for freedom, justice, and reconciliation in every area of life.

Second, PE pursue communal/collaborative practice. Individuals are called to participate in God's liberating mission, but they do so as members of God's people. As Craig Boesel observes in his essay on News, the individualism rampant in some evangelical circles blinds people to the liberationist logic of the gospel (p. 100). If the gospel is merely about eternal life for saved individuals, then the economic, social, and political implications of the gospel are eclipsed. PE are also critical of the perspective popularized by Stanley Hauerwas that the church exists just to be the church, a unique community within secular culture (p. 26). While affirming the church's uniqueness, PE are adamant that the church is unique for the sake of its mission to the world. The collaborative practices of the church do not merely maintain faithful presence in the world: they serve the common good and contribute to the triumph of shalom over broken chaos.

Third, PE share a shalom vision. In his compelling essay on Shalom, David Gushee explains that shalom is the Hebrew word for peace as the opposite of violence and war, but it means much more. Shalom is everything God intended for his good creation: the triumph of life, the rebuilding of inclusive community, abundance instead of scarcity, healing of brokenness, holistic delight, and joyful celebration (pp. 66-71). As Cherith Fee Nordling emphasizes, the resurrection of Jesus' humanity makes shalom possible, as he sends his Spirit to empower the church to embody the new creation (pp. 180-81). The vision and hope of complete shalom-which Telford Work maintains is a trinitarian vision (p. 200)-drives the church's mission and communal practice. Shalom is the “just and peaceable kingdom” in which the church is invited to improvise.

Fourth, PE employ an improvisational method. If redemption is a drama, then Jesus performs the lead role in the drama and the church is invited to participate by improvising on the pattern of his masterful improvisation (p. 35). This metaphor has several benefits. It connects our contemporary situation with the entire biblical drama, showing how our scene fits with the others. As such, it reminds us that Jesus has performed the most important role, and we are primarily improvising witnesses to his performance, as Christian Winn rightly emphasizes (pp. 91-95). In addition, improvisation highlights the various forms of kingdom mission in different cultures. Improvising a just and peaceable kingdom is an intercultural enterprise, and there is no script (pp. 42-43). That does not mean that PE eschew all principles and standards, but that these principles and standards become more colorful in the process of collaboratively improvising the struggle for justice in particular contexts. Does that imply, as Helene Slessarev-Jamir suggests in her essay on Justice, that the Virgin of Guadalupe can rightly bring healing and comfort to Mexican immigrants (p. 85)? This is one example of where a contribution stretches the character of what may be deemed “evangelical” to a breaking point. Having spent a year living and working in Mexico, the sad fact is that the Virgin of Guadalupe does not merely bring comfort to the downtrodden; she is actually adored and worshipped. Insofar as being evangelical means that one's trust for salvation and worship is directed to Christ alone, then surely this suggestion is no evangelical one.

This leads to the most prominent concern with the book, namely, that some particular perspectives represented in the book, like the one just mentioned, cannot be deemed evangelical in either a historical or a theological sense. Therefore, as suggested already, it may have been better for the editors to use the title Prophetic Christians, leaving the evangelical association alone. Nevertheless, this volume contains a number of brilliant essays through which evangelicals should be both challenged and enriched, inasmuch as they contain biblical and timely insights. This is the case especially with those essays that demonstrate how to bring together and simultaneously emphasize theological orthodoxy and social engagement, personal reconciliation and cosmic renewal, the life to come and life in the present, individual piety and communal practice. One of the most enriching elements of these chapters is their ability to mix personal stories with scholarly reflection, and refusing to be captured by false dichotomies. Overall, the book also gives readers a necessary sense of urgency: if the gospel of Jesus is true, then we have much to celebrate and much to do. Having received our roles in the kingdom drama, it's time to improvise for justice with Spirit-empowered creativity.