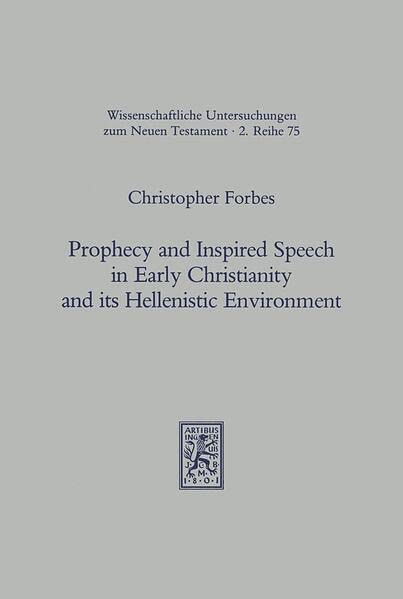 Prophecy and Inspired Speech in Early Christianity and its Hellenistic Environment

This work began life as a PhD thesis, supervised by E.A. Judge and submitted at Macquarie University (1987), where Forbes presently lectures in New Testament and Hellenistic history. It was subsequently revised and published in the prestigious WUNT series (Mohr) in 1995 (perceptively reviewed by A.C. Thiselton in Evangelical Quarterly 70 (1998), 80–82), before being given a wider audience through its publication by Hendrickson. As might be expected of a publication with such a history, it is a substantial and meticulous piece of research, grounded in a thoroughly critical and competent grasp of the primary and secondary literature.

In essence, Forbes takes to task the common religionsgeschichtliche view that Christian prophecy and tongues were simply minor variants of a much more widespread pattern of Graeco-Roman inspired speech, and that the conflict between Paul and the Corinthians stems from their adoption of traits of hellenistic prophetism. Having argued on exegetical grounds that glossolalia in Acts and 1 Corinthians was conceived of as real languages (whether earthly or heavenly), normally unintelligible/foreign to the speaker—contra(e.g.) Thiselton, who took the Pauline phenomenon as sub-linguistic—Forbes demonstrates that this was a new and unparalleled phenomenon. The ‘consensus’ view took tongues to be very similar phenomenologically to what was held to be the ‘ecstatic’ and ‘unintelligible’ speech of the Delphic prophetess, which had to be ‘interpreted’ by other ‘prophets’ if it were to be understood. Forbes successfully shows this to be a misunderstanding. The Delphic promantis uttered her oracles in Greek, originally in verse and at a later stage in prose (and put into verse by oracle poets). The oracles were thus linguisticallyintelligible, even if what they declared was often riddling and incomprehensible. The ‘prophets’ who ‘interpreted’ the oracles to the inquirer was simply an oracle official, and was not conceived of as offering such clarification under any kind of divine inspiration. This most oft-used ‘parallel’ with glossolalia thus breaks down at almost every point. Forbes can show alleged parallels of tongues with the frenzied speech of the Mystery Religions, or with the unintelligible incantations in the magical papyri, fail similarly on close examination. Nor was there a Jewish ‘background’: the apocalypses knew of charismatic praise (1 Enoch40; 71.11) and of seers speaking heavenly languages (Apoc Zeph 8), but these were fully intelligible to the speakers. The final chapters of the Testament of Job depict charismatic speech in angelic tongues, but this portion was probably a Christian (or Gnostic) addition to the work.

Forbes admits that the parallels between Christian prophecy and its nearest Graeco-Roman relation—manticism—are more extensive and subtle. But, as he is able to show, in social/functional terms they are still miles apart (Christian prophecy has no priestly hierarchy, no ritual, no oracular shrine, no procedure for soliciting an oracle, etc.), and they do not even share a common vocabulary.

Scholarly discussions of both prophecy and tongues have been bedevilled by the use of the term ‘ecstatic’ speech, and Forbes makes merry of the confusions regularly involved between Greek notions of ekstasis and modern psychological ones—though it must be said he could profitably have paid more attention to Josephus and Philo on this matter (see now J.R. Levison, The Spirit in First Century Judaism(Brill 1997)).

In all, this is a robust work—the best available on the NT phenomena of prophecy and tongues, and on their relation to alleged non-Christian parallels in the ancient world.