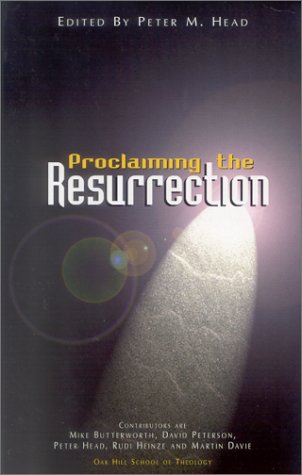 Proclaiming the Resurrection. (The First Oak Hill School of Theology)

The first paper, by Mike Butterworth, focuses on ‘Old Testament antecedents to Jesus’ resurrection’. This is wide-ranging, covering general OT teaching about death, the intermediate state and resurrection, before concentrating on the resurrection of the Messiah specifically. Although the fact that the patriarchs lived in tents is taken as a resurrection hope in Hebrews 11, Butterworth confines himself to only the explicit teaching of the OT. His conclusion is cautious: ancient Israelites were not interested in life after death, but they didn’t rule it out either. The only kind of immortality they could conceive of was bodily resurrection, and not the immortality of the soul.

This collection has more than enough meat to satisfy the hungriest theological appetite. By approaching the resurrection from five different disciplines, the reader is left with a wide range of options for the further study that the book will certainly stimulate.