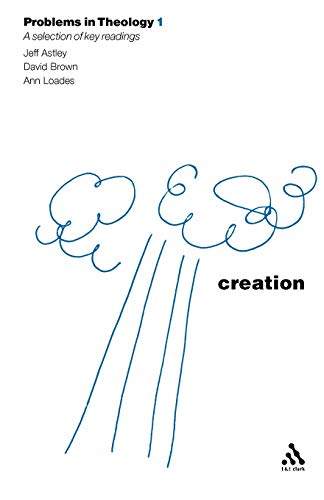 PROBLEMS IN THEOLOGY 1: CREATION: A SELECTION OF KEY READINGS

These two volumes belong to a series designed to provide access to readings on particular controversial themes and issues, carefully selected from relevant modern primary sources. The selections are intended mainly for undergraduates, but are also accessible to sixth-formers and other theology and RS students. Occasionally, the editors (all from the University of Durham) insert their own explanatory comments into the readings, which are otherwise printed as in the original texts. The readings are arranged in such a way as to provide a flow of exposition, or interaction between different perspectives and positions. Each chapter concludes with topics for discussion. Other titles in the series deal with evil, war and peace, God in action, Jesus the Saviour, and Christ the Lord.

The Creation volume begins with a selection of OT texts, then moves through issues such as beginnings; continuous creation; first and final causes; evolution, chance and direction; determinism, openness and the Spirit; creation, myth and theology. The next two chapters deal at some length with process theology (‘a more engaging God?’), Lovelock’s Gaia hypothesis and ecological theology. The final chapter examines Christian creation, e.g. in the NT, in Barth, and after Barth. The contributors include Ian Barbour, Teilhard de Chardin, Stephen R. L. Clark, Celia Deane—Drummond, Colin Gunton, Jürgen Moltmann and John Polkinghorne.

The Introduction to Creation asserts a familiar ‘complementarity’ between theology and science: ‘Theology … offers us a personal—purposive, rather than a scientific-causal, explanation of the universe. It tells us about the purpose (the ‘why’) of the world, not anything about what goes on within it (the ‘how’)’ (1). An extract from Fraser Watts in Science and Religion provides some necessary qualification: ‘It has sometimes been said that science is answering “How?” questions, while religion is answering “Why?” questions. That is helpful as an initial way of making the distinction between them, though it should not be taken in too absolute a way Science does not only answer “How?” questions and religion does not only answer “Why?” question’ (12).

The first section of Science and Religion, ‘Conflict or complement?’ sets out scientific and theological methods, and models for their interaction. This is followed by examination of creation and modern cosmology, quantum theory, uncertainty and chaos; creationism and evolutionary theory; chance and theology; ethics and evolution; the anthropic principle and design; the challenge of reductionism. There is much here which is helpful and interesting. The contributors include Ian Barbour, Michael Behe, Richard Dawkins, John Habgood, Mary Hesse, T. H. Huxley, Alister McGrath, Arthur Peacocke, John Polkinghorne, Michael Ruse and Keith Ward.

The Introduction to Science and Religion states, rather tendentiously: ‘Criticisms of evolutionary biology from biblical literalists and “creation science”, and from the much less extremist advocates of “intelligent design” such as Michael Behe, are rejected by the great majority of academic theologians and practically all life scientists. If evolution is accepted, however, theology must face the challenges that it appears to pose for our interpretations of human freedom, rationality and moral experience, as well as addressing the ways in which it seriously aggravates the problem of natural evil’ (3). Hence, creationist’ views are presented only briefly, and only by their critics (David Fergusson, Denis Alexander, 67–71), rather than by primary sources; and much of the volume is taken up with interaction and synthesis between theology and evolution. Watching this ongoing love-affair, with science setting the agenda for theology, does become somewhat wearisome (for this reviewer, at least), and it is a pity that there is little acknowledgement of contemporary scientific critiques of macro-evolutionary scenarios, apart from a brief extract from Behe (criticised in turn by Philip Kitcher, 71–75).

That said, Science and Religion perhaps contains somewhat more than Creation that is of interest and relevance for evangelical students, although such readers will need to look elsewhere for trajectories through the topics that engage with them from explicitly evangelical convictions and presuppositions. However, between them, these two volumes very usefully set out the wide, challenging landscape of theological perspectives on creation, and key issues in the interaction of science and theology or religion. The judicious selections provide surprisingly comprehensive coverage, and good pointers towards further study. ‘However it reads the world, Christian theology must always understand and approach it as the creation of the Christ-like God’ (Creation, 4).