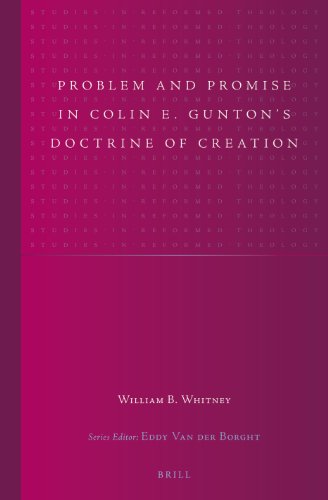 Problem and Promise in Colin E. Gunton’s Doctrine of Creation

William B. Whitney, who teaches systematic theology at Fuller Theological Seminary and psychology at Azusa Pacific University, has made a significant contribution to the study of the late British theologian Colin E. Gunton’s doctrine of creation. While Gunton’s work on the doctrine of the Trinity has received much attention, his doctrine of creation has rarely been explored. Whitney endeavors to show that the doctrine of creation is “an integral aspect of Gunton’s theology” (p. 1) since “Gunton conceives the Trinity in relation to the created order” (p. 1). In the end, Whitney not only succeeds in making this case, but also in offering cogent reasons (e.g., cultural engagement, ethical obligations) for the significance of a Christian doctrine of creation construed in a trinitarian way. This is Whitney’s PhD dissertation from Fuller Theological Seminary in 2011.

In chapter 1, Whitney explores Gunton’s claim that the early Christian doctrine of creation has undermined the goodness of the created world due to the influence of dualism (e.g., Platonism and Gnosticism). This resulted in distorting the concept of creation and our relation to the created world. Whitney affirms the validity of Gunton’s claim and concludes, “These patterns of Greek thought are problematic for the Christian doctrine of creation and theological anthropology” (p. 40).

In chapter 2, Whitney examines Gunton’s claim that modernity is another cause of the misinterpretation of the doctrine of creation and theological anthropology. While the ancients undermined the significance of the created world, modernity displaced God with individuality as the “unifying factor for all of creation” (p. 47). Accordingly, it overlooked God’s interaction with the created world (e.g., the incarnation) and deism became the paradigm for perceiving the relation between the Creator and creation. Such “Modernist notions of the God-world relationship” have resulted in individualism and isolation (p. 195).

In chapter 4, Gunton’s theological anthropology is explored. Whitney states that in Gunton’s anthropology “the Triune God [is] the basis of the true human personhood” (p. 111). Although there is a distinction between God and humanity, “human personhood . . . can be drawn from God’s Triune nature,” which itself consists of relationality (p. 111). Christ who is the true image of God is the exemplar of true personhood. For humanity, authentic personhood is achieved through conformity to Christ by means of the eschatological Spirit.

In chapter 5, Whitney offers a comparison of Karl Barth’s and Gunton’s views of culture. Whitney argues, “Gunton’s view holds some similarities with Barth, but also moves beyond Barth so that through an understanding of creation, culture becomes a specific area of focus in his theology” (p. 161). Barth sees that “the world is worthy of being investigated and explored because it was made by a good Creator” (p. 198). Yet, Gunton goes further to say that human cultural activities such as the arts and politics enable the created world to achieve its perfection as the eschatological Spirit transforms humans to become what we are intended to be. This interrelation of humanity and the created world is a significant point for Gunton’s theology, which also diverges from Barth. Human cultural activity is necessary and meaningful since God calls humans to participate in perfecting the created world that is good and pleasing in God’s eyes.

There are many things to commend in this book. Whitney’s efforts in locating Gunton’s doctrine of creation in the wider scope of his theology are praiseworthy. Moreover, his theological acumen in exegeting Gunton’s often dense theology is evident. Further, the book serves as an effective overview of Gunton’s theology since Whitney incorporates other significant aspects of Gunton’s thought including the doctrines of the Trinity, anthropology, Christology, pneumatology, ecclesiology, and culture. This aspect distinguishes Whitney’s work from a similar work by Hans Schaeffer, Createdness and Ethics: The Doctrine of Creation and Theological Ethics in the Theology of Colin E. Gunton and Oswald Bayer.

There are also some weaknesses worth noting. Whitney’s work is based on Gunton’s premise of the unity of God’s act and being. While a number of important insights have arisen from this premise in Gunton’s theology, it bears revisiting in relation to Gunton’s doctrine of creation. Gunton argues, “who God is in his movement and relations towards the created order is who God is in his eternal being” (p. 197). If so, one might reasonably conclude that God had no choice but to create a world. Whitney’s volume would have benefitted from a discussion of this apparent tension. Further, Whitney’s interpretation of Gunton’s view of cultural engagement seems to omit Gunton’s emphasis on the role of the church. Gunton says that Israel and the church are “forms of culture instituted by God” (Colin Gunton, Father, Son, and Holy Spirit: Essays Toward a Fully Trinitarian Theology [T&T Clark, 2003], 121). Since this aspect of Gunton’s ecclesiology is lacking in Whitney’s analysis, it seems to give the impression that cultural engagement is something that only takes place outside the church.

In summary, Whitney has made a significant contribution to the understanding of Gunton’s doctrine of creation in light of his Trinitarian theology. His work will serve scholars of Gunton’s work as well as those who are interested in the relationship between the Trinity and creation.