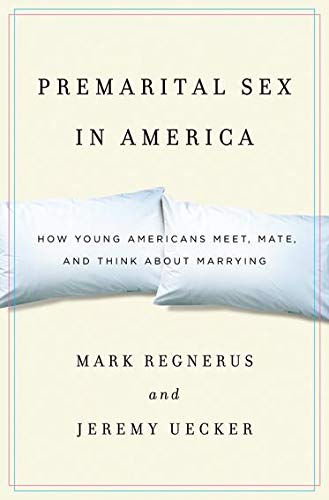 Premarital Sex in America: How Young Americans Meet, Mate, and Think about Marrying

If terms like “hooking up” and “friends with benefits” are any indicator, one would assume that today's youth live in a playground of loveless, hedonistic sex. Though still disconcerting, Regnerus and Uecker show that the reality is considerably more complex. Utilizing four surveys, two sets of interviews, and a few key sociological insights, they offer a thoroughly researched, carefully constructed study of the sexual beliefs and habits of young adults that challenges common misperceptions and suggests intriguing alternatives for making sense of them. The book offers thoughtful sociological research written in a very readable style and accessible at a popular level.

The introduction describes the sources and parameters of the study: surveys and interviews are combined to shed light on the sexual practices of unmarried, heterosexual, American adults ages eighteen to twenty-three. Survey results came primarily from the National Longitudinal Study of Adolescent Health, a longitudinal study involving three interviews beginning in high school and ending by age twenty-eight. When restricted to the target age of eighteen to twenty-three the authors were left with a sample size of 11,729. Survey results were supplemented with interviews and stories of young adults. The authors themselves interviewed forty undergraduate students at the University of Texas from 2007 to 2009. The stories recounted give a human face to the statistical data while guarding against its misinterpretation. Those interested in the technical detail of these statistical models and the research methods taken can find them described in Appendixes A and B.

The next six chapters explore the sexual mores and behaviors of emerging adults in increasingly broader contexts starting with a study of individual behaviors, moving to relationships, then to the college campus, and finally to a national scale in chapter seven titled, “Red Sex, Blue Sex: Relationship Norms in a Divided America.” Interspersed are chapters that address sex and emotional health and how marriage is understood among young adults.

The data and stories alone in these chapters provide plenty for the ministry-minded to mull over. For instance, we learn that studies indicate a very strong connection between sexual behavior and emotional well-being, especially for women. The more sexual partners a woman has had, either recently or over a lifetime, correlates to indicators of poor emotional health and even depression. Or consider that, however much our culture may argue the contrary, pornography does influence the way men think about sex and relationships, contributing to the belief that “sexual exclusivity is both unrealistic and uncommon in real life,” among other damaging misperceptions (p. 94). This kind of scientific research can provide added impetus and persuasive power to the church as it seeks to speak to emerging adults about sex and relationships.

The unique contribution of the book is not in the kind of insights just noted, but in the way the entire study is understood through the lenses of “sexual economics” and “sexual scripts.” Citing the work of psychologists Roy Baumeister and Kathleen Vohs, the book describes how the same kinds of market principles that operate in, say, real estate operate in a similar fashion in the sexual market place: Men and women live in a sexual marketplace in which “goods” are valued and bargained for. In general, the book argues, young men are more interested in having sex than women, while women are more interested in creating an enduring bond that will lead to a secure environment for establishing a home and raising children. Recent shifts in American culture have created pressures that lead women to “barter” less aggressively for commitment and give young men the sexual liaisons they desire apart from marriage. Some of the factors the book cites are the cultural expectations that young adults, in general, establish themselves in a career before starting a family, that women are able to establish themselves socially and economically quite apart from marriage, and that women significantly outnumber men on most college campuses.

Factors that most significantly skew the marketplace are not simply the unintended effects of the industrial revolution or economic prosperity, but rather the numerous “scripts” that shape young adults' understanding of what sex, relationships, and marriage are all about. In chapter 1 a script is described as being “like the script that an actor follows in enacting a play. . . . We follow unwritten scripts that tell us what to think, how we ought to act in certain situations, what we should say and when,” and we learn that following these scripts is a “key motivator of human behavior” (p. 4). These scripts make up the larger narrative about sex and marriage in our culture. While these scripts are alluded to throughout the book, they are most thoroughly explored in chapter 8, which examines ten of the narratives they are a part of. Among them are “the introduction of sex is necessary in order to sustain a fledgling or struggling relationship” and “sex need not mean anything.” These and other narratives like them are clearly at odds with a biblical and even a traditional understanding of sex and marriage but operate powerfully in the psyche of emerging adults. This is where the book could contribute to a vital conversation within the church about sexuality. The church, of all institutions, has the most captivating, uplifting, and transformative narrative of all: the God of all coming in the flesh to redeem and be one with his bride. This book can help the church apply the biblical narrative to the specific false narratives affecting young adults today.

This leads to what I consider not so much a criticism of the book but the limitations of one written within what we might call the “popular science genre.” As the book unfolds, one realizes that the topic is more than a sociological curiosity to the authors. By the end the authors make it clear that while “sexual economics” are explored to describe what is, as a sort of fixed reality, “sexual scripts” describe something that can be changed—and ought to be changed. Of course, the authors have been illustrating the destructive effects of these scripts throughout the entire book, and yet the book never really leads us clearly to the solutions. It is as if the authors, as a wise old uncle, are leaning in close to tell you in vivid detail about the problem, and then, with a wink, expect you to know what to do next. Again, I consider this more of a limitation of the genre than a criticism of the book. If, however, you are interested in what at least one of the author's ideas for dealing with the problem are, you need look no further than Regnerus's February 2011 interview article with Christianity Today, entitled ” Sex Economics 101,” where he offers his personal reflections on how the church can respond to the challenges described in the book.

In ministry faulty assumptions can ruin efforts to love wisely and turn the sweet strains of the gospel message into a clanging cymbal. Premarital Sex in America is a very useful resource for those trying to understand the complex landscape of sexuality and young adults. This book will be useful to anyone ministering to young adults who want to understand and speak to the scripts that are the key to understanding the way they think about sex and relationships, but be prepared to make the applications on your own.