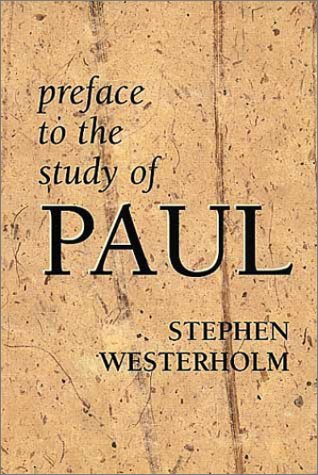 Preface to the Study of Paul

Biblical scholars, like scholars in any other field, can easily fall into the trap of writing only for one another. By training and experience, we become familiar with the ‘discourse world’ of modern technical scholarship—a world with its own assumptions about methods and techniques and its own peculiar technical language. And so even well-read, intelligent Christians find our books difficult to understand, while for the unbeliever they are all but incomprehensible.

Stephen Westerholm recognizes and laments this problem. And his Preface to the Study of Paul seeks to do something about it. Specifically, Westerholm is out to bridge the gap between the ‘horizon’ of the apostle Paul and the ‘horizon’ of the modern non-Christian. To do so, Westerholm recognizes, one must attack the issue at the level of world-view. Paul articulates his understanding of God, reality and salvation from within a Judaeo-Christian world-view that few unbelievers share anymore. To make Paul’s vision intelligible to the sceptical postmodern, bored with ‘religion’ and all its trappings, some serious spadework at the level of world-view is necessary. So in Preface to Paul Westerholm works through Paul’s greatest theological letter, Romans, trying to make the apostle’s basic ideas clear to the modern reader by laying bare the assumptions that lie behind his argument.

We may take Chapter 3, ‘War Against Goodness’ (pp. 20–31), as a typical example of Westerholm’s approach. Here he is dealing with Paul’s discussion of human sinfulness in Romans 1:18–32. Many commentaries on Romans would simply plunge into the details of the text. But Westerholm realizes that the whole idea of ‘sin’ is as foreign to our modern Western world as the horse-drawn carriage, so he begins with analogies that might help the reader get an idea of the biblical notion of sin. In several brief vignettes from modern life, he portrays the notion of self-gratifying behaviour. Ashley and Chrystal, for instance, ignore the needs of the people they have been sent to help as social workers while engaging in trivial conversation with one another. Brandon, growing up to treat everything as existing for his own pleasure, ends up raping a girl. Here, Westerholm argues, is a kind of self-centred behaviour that all people innately condemn as ‘wrong’. And it is not a matter simply of breaking rules; what Ashley, Chrystal and Brandon demonstrate is behaviour that fails to take into consideration ‘the reality of a world much bigger than themselves’ (p. 26). Westerholm then moves to the book of Proverbs, demonstrating that, here again, the essence of ‘wrong’ behaviour consists in failing to take God and his created world into account. Finally, then, we are ready for Romans 1:18–32. Westerholm gives no verse-by-verse interpretation; rather, he notes simply that Paul here also portrays human behaviour as wrong because it fails to recognize the place of God and the created order. Paul speaks in this section not about breaking laws but about insulting the person of God and about actions—such as homosexuality—that involve ‘seizing the gods of the created order on one’s own terms’ (p. 30). And so Westerholm concludes: ‘we choose our own actions. But we do so in a world in which there are appropriate responses to the reality that confronts us and others are that inappropriate. There is right and there is wrong, there is good and there is evil. And which we do makes a profound difference’ (p. 31).

I think that Westerholm accomplishes his purposes well in this chapter—and, indeed, throughout the book. Preface to the Study of Paul is an excellent introduction, for the contemporary unbeliever, of many of the most important of Paul’s theological teachings. And Christians can also profit from the book’s fresh portrayal of well-known theological themes. There is something refreshing about a book on Romans without a single reference to another scholar!