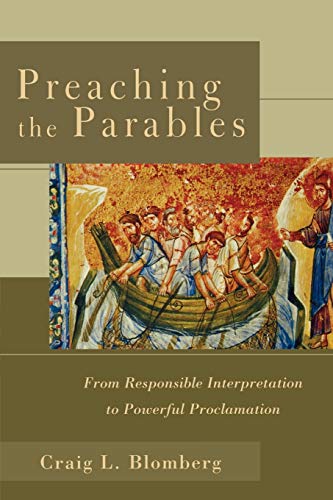 Craig Blomberg is Distinguished Professor of New Testament at Denver Theological Seminary, and author of many notable and helpful books on the NT. This book is different from anything he has previously published, because it is a collection of preached sermons, with each sermon followed by an explanation on the preaching method and strategy that he has used. It is thus ‘two for the price of one’: a collection of fine sermons in different styles on parables of Jesus and an informative reflection on preaching from the NT in ways that are faithful to the text and relevant to modern congregations. I found it helpful in both respects: Blomberg is a careful and responsible exegete, and someone who thinks hard and not simplistically about the application of the parables to today’s world, and someone who communicates sympathetically so that his congregations can hear the Lord’s word and someone who applies the teaching to himself.

His congregations are American, and that comes out in his applications, for example in his references to the growth of Mormonism. He speaks helpfully out of his own experience, and is often critical of his own culture and church tradition, raising sharp questions about Western lifestyles and evangelical attitudes. Thus he challenges the judgmental attitudes that sometimes pervade our churches, and he challenges rich Christians to give really generously.

There are inevitably questions of detail that might be discussed: thus being non-judgemental does not mean that churches should not be careful about those who have positions of leadership in the church.

On the question of wealth, Blomberg does not think that all Christians are called like the rich man to ‘give away all that they have’; he recommends giving a graduated ‘tithe’, i.e. giving a progressively high proportion of your income as your income rises. That is a helpful suggestion, but I wondered if he quite did justice to verses such as Mark 10:28, Luke 12:33, 14:33, Acts 4:32, and I am not persuaded that the story of Zacchaeus justifies a less radical discipleship. Some readers may be a little uncomfortable with Blomberg’s open references to his own Christian practice (e.g. giving away 40% of his income), but he mentions this not to boast, but in order to illustrate the practicalities of Christian discipleship in the affluent West; he wrestles with the real issues, and evidently practises what he preaches. His life as well as his words are challenging.

Blomberg often anticipates problems that his congregation may have with the teaching of a particular parable. This is a good thing for a preacher to do. But sometimes I wondered if his discussion of what Jesus did not mean detracted from the force of what Jesus did mean! For example, Blomberg refers quite a lot to the Arminian/Calvinist debate over whether true Christians can fall away, siding with the view that they cannot; I wondered if his discussion detracted slightly from the impact of the parables of warning to servants of the master. I was also unsure whether in reasserting a traditional understanding of hell as unending torment he did justice to the views of those who believe that the wicked end up in terrible but final destruction.

He refers a lot to the tripartite shape of parables—something he argued for in his earlier book Interpreting the Parables. Some people might find his structural analysis more confusing than helpful (e.g. the reference on p. 201 to ‘the classic triangular model, with five good and five wicked subordinates at each vertex at the base of the triangle’!).

I have very few other quibbles with the book, though I wish that commentators (not just Blomberg) would translate the Greek word gregoreo with the modern English word ‘keep awake’ rather than with the old English word ‘watch’. Also, I am still inclined to doubt if the parable of the sheep and the goats is about how people treat Christians (‘the least of these my brothers’); I suspect it has a wider reference, challenging Christians to demonstrate their Christian faith in loving action to those in need.

This is a good readable book, worth reading and learning from.