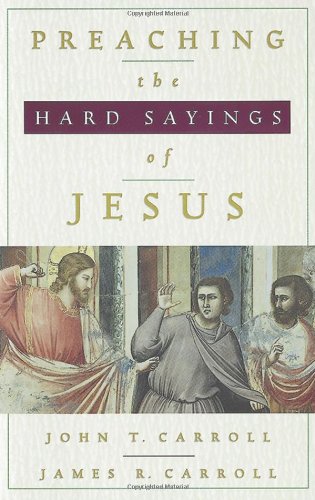 Preaching the Hard Sayings of Jesus

This book is an unusual joint project, in two significant ways. Firstly, it is a father-and-son co-operative endeavour. James Carroll, the father, has been a Presbyterian pastor over more than 50 years, in three major US congregations. John, his son, is Associate Professor of NT at Union Theological Seminary, Richmond. More importantly, this book is an attempt to bring together the disciplines of academic study and biblical preaching, as from their individual areas of expertise the co-authors reflect on the meaning and relevance of some difficult passages in the teaching of Jesus.

The first three chapters of the book deal with sayings that are harder to ‘swallow’ than to understand, exploring themes such as ‘the scandal of grace’ (the Good Samaritan, the Pharisee and the Tax Collector, the Prodigal Father), the demands of discipleship (the cost of grace) and the offence of judgement (the unforgivable sin, the final banquet, the rich man and Lazarus). The focus then moves on to sayings where our linguistic and cultural distance is the problem (the dishonest steward, the friend at midnight), and the book concludes with passages ‘in which Jesus appears as an all too human figure’ (facing the future, the cross and separation from his father).

Approaching the central themes in Jesus’ teaching, the authors have opted for depth rather than breadth. There is little treatment of the texts in relation to their contexts, in the gospel narratives, for example. The authors make clear this is not their methodology, nor do they attempt ‘to offer any definitive interpretations of the texts we explore’, since the sayings ‘resist reduction to a single meaning’. Their aim is to stimulate a variety of contemporary responses, to help the preacher grapple with the meaning of the saying in its first-century setting and communicate its message today.

For each passage, the same process is followed. The scholar son provides his own translation and addresses the key questions of exegesis, entitled ‘an interpretation’. The preacher father then moves us ‘from text to sermon’, providing in effect an extended sermon outline, with illustrative material and applicatory suggestions. Each section ends with a bibliography and extensive end notes (mainly exegetical).

It is an interestingly different concept, but does it really work? The interpretative sections provide a well-documented survey of the range of scholarly opinions on offer, within a broadly conservative spectrum. There are particular insights into Palestinian first-century culture, of the sort we have come to value in Kenneth Bailey’s work, which illuminate some of the problems in the parables. What seems to be lacking is any overall theological cohesion with regard to either the authority of Scripture or of Christ’s words, as we have them. So, we are left with the prevailing impression that the hard sayings cannot really mean what they say. For example, in the section dealing with divorce, we are offered the suggestion that Christ’s strong words are ‘another example of Jesus’ characteristic use of exaggeration to challenge beliefs and practices … a hard saying to be taken seriously, but not to be pressed literally’. Similarly, in dealing with Christ’s prophecies of the end of time, both authors seem happy to solve the problems by the expedient ‘Jesus was mistaken’.

The sermons are more a matter of taste. They belong to the genre of American exhortation to positive thinking and action, supported by many cultural, historical and literary allusions, and not a little devotional poetry. The underlying theology seems to be clearer and more robust, but the content is largely framework thinking that could be applied to a variety of similar texts. There is little exegetical particularity as a cutting edge, to make us really sit up and take notice-more to comfort the disturbed, than to disturb the comfortable. The overall effect of the book is polished, accomplished and confident. There are many good things in it, but in the end, one is left with the feeling that the hard sayings have been domesticated.