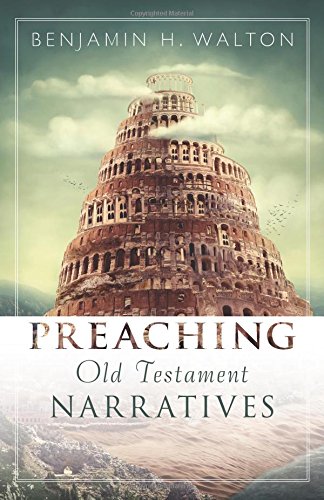 Many believers have had the unfortunate experience of listening to a sermon that butchers an OT narrative and reduces it to a few principles derived from the speaker’s precarious use of the analogy of faith. Likewise, evangelical preachers acknowledge the challenge in crafting sermons from OT stories, and others have great difficulty in making them relevant to a congregation of saints. Therefore, when publications claim to aid pulpits in the task of proclaiming the meaning and application of OT stories, I approach these works with excitement and hope.

Such was my outlook when I came to Benjamin Walton’s Preaching Old Testament Narratives. Immediately I was grateful to see that the author gives good attention to the hermeneutics of OT narrative prior to explaining the homiletics of OT narrative. Largely following the theory and method of Don Sunukjian’s, Invitation to Biblical Preaching (Grand Rapids: Kregel, 2007), and Fee and Stuart’s now classic How to Read the Bible for All Its Worth (Grand Rapids: Zondervan, 2014), Walton’s work does not offer many novel instructions for discerning meaning from OT narratives. Instead, he fashions fresh terminology for concepts germane to evangelical homiletics since the time of Robinson’s Biblical Preaching (Grand Rapids: Baker, 2014). Significantly, Walton’s “historical context” for OT narratives is “an Old Covenant context,” which requires reading all OT narrative in light of ancient Israel’s view of the retribution principle and afterlife, their latest Old Covenant expansion, and their original audience in order to preach the narratives well (p. 52).

The strength of Preaching Old Testament Narratives is Walton’s stylistic admonitions. He invites preachers of God’s Word to respect the hearers (almost to a fault). His pastoral adages are rich, such as, “We must not use the pulpit to satisfy our need to feel important, influential, powerful, or worthwhile,” and “the willingness to admire the congregation is an act of humility” (p. 107). Moreover, I found it to be encouraging to read from the former pastor, “Preaching that’s winsome is emotionally and intellectually respectful” (p. 208). Walton’s axiom is true for preaching all genres of Scripture.

Three items of concern are of note for those looking to be faithful to the exposition of the OT stories. First, after determining that OT narratives differ from NT epistles in mode of communication, length of “complete units of thought (CUTs),” and their tendency to be descriptive rather than prescriptive, Walton concludes, “OT narratives convey a small number of theological principles.” Further he states, “The number of theological principles in one or two chapters of OT narrative pale in comparison to one or two chapters of NT epistle…. For preaching, this means that OT narratives contain very few legitimate application principles” (p. 35).

With this, the author limits the significance of OT narrative for the life of the contemporary believer. He establishes a false dichotomy between the wealth of applicable material in the two genres. Yet the premise is worth challenging on the basis of the sheer volume of narrative—and narrative CUTs—within the OT. I find it difficult to conclude that so-called “principles” are “small” when I see the NT writers applying OT narratives for ethical exhortations to holiness (1 Cor 10:1–13), to argue for fairness in relief giving (2 Cor 8:15), to offer support for properly understanding justification (Jas 2:21–25), to build a case for the Jewish rejection of Christ as Messiah (Acts 7:9–41, 44–47), and for many other issues in the lives of the early churches.

Second, Walton’s approach rests in a reductionist view of “genre,” “words,” and “message” that begins early in his text. Rightly, Walton suggests that a recognition of the genre of a text is necessary to make sense of the words of the message of a text. However, he also proposes, “In some genres, the words are similar to the message” (p. 31). This is the equivalent of saying that in some genres words mean what they say, which is to conclude that in some types of literature the terms themselves are the same as the message communicated by the terms. Walton gives an example in which one attempts to communicate “[one’s] kids are great.” He writes,

Words: My kids are great.

Message: Believe my kids are great.

His oversimplification of movements through the text skews his conclusion about the message. A declarative statement of this sort does not invite a listener to “believe,” for that is a response of a hearer, not a declaration of a speaker. Instead, the “message” of Walton’s example is, “Ipersonally assess the value of my children to be great.”

Turning then to an example in the OT, Walton provides the following analysis of Genesis 11:1–9:

The “words” are the writer’s summation, and are not necessarily derived from the words of Gen. 11:1–9. This is evident in the terms, “after the flood,” and “God’s redemptive plans,” for neither set of words reflect terms in Genesis 11:1–9. Instead, the terms reflect the Biblical story line of Genesis 6–11, and traces the theological trajectory of Genesis 3:15. The “message” is not the meaning of pericope, but of a greater narrative context and theology extrinsic to the terms of the selected passage.

Closer attention to the terms (Walton’s “words”) would allow a reader to discern that the subject of Genesis 11:1–9 is the Lord’s visitation to address the children of man’s attempt at total autonomy. “Visitation” is the message communicated by, “And the LORD came down to see the city and the tower” (11:5) and “Come, let us go down and there” (11:7). The intent of the visitation according to 11:7 is to “confuse their language,” and its result is repeated three times in 11:8–9: “dispersed … confused … dispersed.” Reductionism and atomizing characterize Walton’s approach to OT narratives, although he warns his readers against these practices.

Third, Walton does not place much confidence in the preacher’s ability to ascertain the meaning of narrative through faithful reading of the biblical text. He emphasizes reliance on the work of scholarly resources. The writer would do well to promote contemplative reading of OT stories.

Preaching Old Testament Narratives manifests other concerns with respect to hermeneutics. Like several other evangelicals who have attempted to provide a method of discerning meaning from OT narrative, Walton does not offer a theory that demonstrates that the central idea in the text is God’s voice. Only when we recover this idea are we preaching God’s words from OT narrative. To this end, David Helm’s Expositional Preaching (Wheaton: Crossway, 2014) is a valuable complement to Walton’s writing.

Equally so, we must say that other attempts at interpreting and preaching OT narrative that do not get to God’s voice are not evangelical preaching. They are good, well-crafted methods, but short of making God’s voice known. The failure to say this leaves readers accepting something short of preaching the textual idea as God’s word.