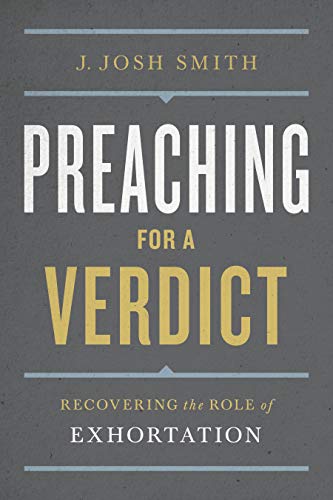 Preaching for a Verdict: Recovering the Role of Exhortation

When the evangelist Bailey Smith was asked what the difference was between preaching and teaching, he replied simply, “Preaching calls for a verdict” (p. 1). His son, J. Josh Smith asserts that a call for a verdict—exhortation—is missing from much preaching today. There are few today who exhort their hearers to respond to the Word of God proclaimed. While we should celebrate the recovery of biblical exposition, an important aspect of preaching has been increasingly neglected. Explaining, illustrating, and applying the text are important and necessary, but many preachers unintentionally leave their listeners without feeling the need or urgency to respond. Information about the biblical text is transferred from preacher to listener, but the message is not pressed upon the hearers. Given the current situation, it would be fruitful for preachers to answer an important question: Must a preacher exhort his listeners to respond to the Word preached in order to be faithful to God? Josh Smith answers with a resounding yes! After reading Preaching for a Verdict: Recovering the Role of Exposition, I have come to agree with him.

Josh Smith (DMin, Southwestern Baptist Theological Seminary) has served as a missionary in central Europe, ministered to international students at Duke University, and has spent over fifteen years as a senior pastor, currently serving at Prince Avenue Baptist Church (Bogart, GA). Smith hopes his book will be “the beginning of a conversation about the distinct role of exhortation in preaching” (p. 2).

In chapter 1, Smith asks what happened to exhortation? He defines exhortation as “persuading the listener to respond to the call of the text through proclaiming the point of the text, in the voice of the text” (p. 19). Historically, men like Augustine, Martin Luther, John Calvin, François Fénelon, the Puritans, Jonathan Edwards, and Charles Spurgeon encouraged exhortation in their preaching and writings about preaching. However, in a 2011 survey by Michael Duduit in Preaching, which highlighted 25 of the most influential preaching books of the past 25 years, the role of exhortation was overlooked in almost every book. Smith believes homiletical discussion about exhortation has been missing because exhortation has become synonymous with application (p. 7). Smith’s work of recovery is timely.

In chapter 2, Smith gives a theological foundation for exhortation. Smith reminds the preacher that God has spoken and the Bible is his spoken word. God’s word is inspired, authoritative, sufficient, and powerful. Furthermore, God speaks for a reason—to reveal himself, to establish a relationship with sinful humanity, to sanctify his people, and so that people made in his image would respond in worship. Therefore, the preacher speaks as a spokesman for the speaking God. He must preach not only to transfer information, but also to see transformation. Smith says, “The goal of preaching is to make much of God, and to plead with people to respond to the call of God” (p. 30).

In chapters 4 and 5, Smith gives examples of the centrality of exhortation drawn from the OT and NT. Smith says the preaching of Moses is paradigmatic for the rest of the OT, especially his sermons in Deuteronomy. In addition to Moses, Smith gives examples of exhortation from the ministries of Joshua, Ezra, Amos, and Ezekiel, as well as the wisdom and other prophetic books. Since the patriarchs and prophets significantly influenced Jesus and the apostles, it follows that exhortation was central to their preaching (p. 77). The sermons recorded in Acts as well as the exhortation of the book of Hebrews (Heb 13:22) are used to bolster Smith’s argument about the necessity of exhortation.

In chapters 6–8, Smith moves from the biblical and theological to the practical. If the Bible demands that faithful preachers must exhort, how ought preachers do exhortation? In chapter 6 Smith suggests a number of convictions foundational to exhortation. Smith is an advocate of text-driven preaching: “The text drives everything in the sermon” (p. 94). Exhortation is to be found within and driven by the biblical text. Furthermore, exhortation is related to, but distinct from application. Here, Smith practically shows four steps for finding the exhortation of the sermon. In chapter 7, Smith gives seven examples of exhortation from seven genres of Scripture. Though not full sermons, the reader is assisted by learning how the author prepares sermons and illustrates his focus on discerning the exhortation of the text. Finally, chapter 8 gives three ingredients for effective exhortation: diligence in the study, empowerment by the Spirit, and delivery with authority.

Smith’s book has four strengths that deserve mentioning. First, Smith is convincing in his argument about the need to recover and practice exhortation. He proves his case biblically and theologically and sticks to his clear thesis. Second, though this book is meant to be the beginning of a conversation about the necessity of exhortation, it is much more than a primer on the subject. Furthermore, he furthers the homiletical conversation by offering ideas for further study. Third, Smith’s book is well-researched. He uses a variety of sources from the field of homiletics to bolster his argument. Fourth—and most importantly—there is a practical benefit to be gained from this book. Being convinced of his thesis has helped my preaching. Since reading the book, I have desired to earnestly press the people of God I serve to respond to his word. Reading this book will surely spur preachers on in their quest to be faithful to God and see people converted and built up in their faith.

Two weaknesses will be briefly noted. First, though well-researched, the average preacher could get overwhelmed by the academic feel of the book. I would not be surprised if this was his Doctor of Ministry project turned into a book, particularly as at one point he says, “Since that is not the primary point of this paper…” (p. 99). Second, chapter 7 was devoted to models of exhortation, but was not Christ-centered. Though this chapter is helpful to see how he discerns the point, voice, call, and exhortation of the text, the examples from OT texts did not point to Christ, except the clearly prophetic text of Isaiah 9:1–7. If exhortations to respond to the imperatives of the text are not grounded in the indicative of the gospel, pastoral harm could be done under the banner of a zeal to recover exhortation.

God has spoken and woven exhortation into the biblical text. If preachers are going to stand in God’s place and preach his word as ambassadors, they must call their hearers to respond—they must preach for a verdict! Reading books like this, as well as Jim Shaddix’s Decisional Preaching (Spring Hill, TN: Rainer, 2019) and John Angell James’s An Earnest Ministry: The Want of the Times (Edinburgh: Banner of Truth, 1993) will help preachers preach better and stay faithful to their task and scholars of preaching further a conversation about a recently neglected, but crucial aspect of preaching.