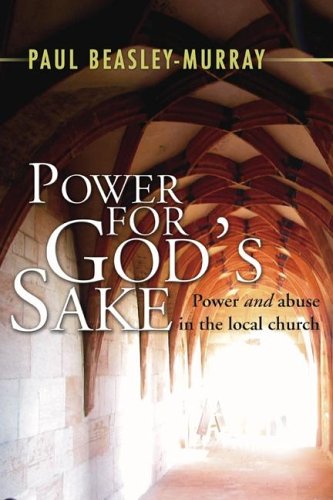 Power for God’s Sake: Power and Abuse in the Local Church

This book takes a long, hard look at the issues of power in the local church. Beasley-Murray recognises that the use of power language, particularly among charismatics, is deeply problematic. Yet he sensibly refuses to regard power as intrinsically evil and acknowledges that, although power can be destructive, ‘it can also be extraordinarily creative’. It would be a mistake, however, to think that the author only has charismatics in his sights. He recognises that power games within the church at large have served seriously to undermine the credibility of the church and thus its mission and growth. The author also recognises that church leaders are not only sources of the abusive use of power, they too can often be abused by power struggles within the local church.

Astonishingly, Beasley-Murray discovered during his initial research that no serious work had been done on the use and abuse of power in the local church at large. One of the most significant aspects of this book, therefore, is the results and detailed analysis of a questionnaire on perceptions of power sent in 1996 to 231 ministers in pastoral charge who were members of the Richard Baxter Institute for Ministry (RBIM). This population was chosen due to restrictions imposed by the lack of funding for any larger scale survey and also due to the relative ease of access occasioned by the author being chairman of this organisation. Beasley-Murray fully recognises the dangers of using such a self-selecting sample but counters this by arguing that members of the RBIM are, by definition, interested in the practice of ministry. As such he suspects that they would be more likely to be open and self-aware and more willing to complete and return the questionnaires. The ministers approached were also sent two additional questionnaires designed for officers within their church and were encouraged to send an additional ministerial questionnaire to a colleague in another church in the area. A copy of each of the questionnaires is helpfully included in two appendices.

116 RBIM members completed the questionnaire in full. In addition, 25 non-RBIM ministers responded and 120 church officials. However, church officials whose minister had not replied were excluded from the survey and so the final sample figure for church officials was 112. Three chapters totalling 96 pages are taken up with a description and analysis of the survey. This makes fascinating, and at times disturbing, reading. For example, 59% of ministers under forty-five who were surveyed have seriously considered leaving the ministry—mainly as a result of power struggles of one kind or another.

After the detailed analysis of the survey results, the fifth chapter provides a useful summary of various analyses and models of power which have been proposed. The chapter concludes with a brief overview of the language of power and authority in Paul, before highlighting Jesus as the ultimate model for the wise use of power. This leads naturally on to a chapter about learning from the life of Jesus in which the temptation narratives are read as three temptations to misuse power. The author then goes on to emphasise Jesus as servant and shepherd as the outstanding models for ministry.

The final chapter concerns handling power with care. Here Beasley-Murray decisively rejects the idea that power is intrinsically evil and convincingly argues that authentic exercise of power—‘power for God’s sake’ always has the welfare of others at heart.

I thoroughly recommend this timely book as essential reading for all who are engaged in Christian ministry and for those struggling with the use of power language in the church. It is highly readable and the author is obviously well versed in the literature concerning power within the field of the sociology of religion.