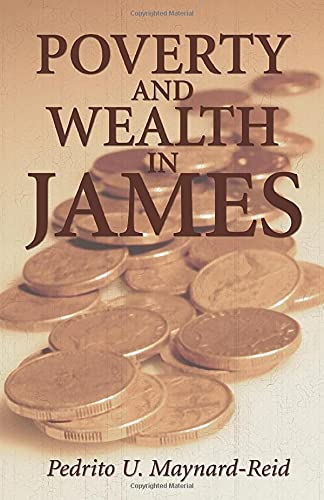 Poverty and Wealth in James

When a Jamaican Seventh-Day Adventist presents what we suspect is his doctoral thesis, it is time to rejoice over seeing Caribbean scholars joining in scholarly dialogue. Furthermore, a study of the sociological background of James is a needed contribution. Thus the topic, methodology, and background of this book form an auspicious beginning for a fresh approach to James.

Maynard-Reid argues that James is to be set in the period before ad 50, thus in the earliest period of the church before there was any separation between church and synagogue. In the light of this dating and the general attitudes towards rich and poor in the first century, he exegetes Jas. 1:9–11; 2:1–13; 4:13–17; and 5:1–6, looking at the attitudes they show towards rich and poor. His basic conclusion is that James’ community did not include the rich; indeed, the rich are seen as oppressors outside of the community. In this James’ community shared some of the attitudes of the Judaism of the common people of his day. Furthermore, James argues for ‘God’s option for the poor’ and thus is an encouragement to Christians to ‘take that option and to take up the cause of the oppressed’.

Generally this work is carefully done, using the James scholarship available up to 1985. Nor is there much in his conclusions with which this reviewer would disagree. However, one gets the continual feeling that the book is far too short for what it tries to do. For example, while he shows the possibility that James fits the pre-ad 50 period, he does not show that this is superior to R. P. Martin’s setting in the early 60s, when rich-poor tensions in Judaism were running higher. And while he notes that some have seen the literary form of James as coming from a later period than the original sermons and sayings, the effects of this on his conclusions are not mentioned.

One is quite pleased with the wide amount of background material employed by Maynard-Reid, but his use of rabbinics is open to question, for he never discusses the dating of the citations he uses. This is quite significant, for the cataclysm of ad 66–70 profoundly affected Judaism, as did the second war in ad 135. Thus one cannot without corroborative evidence read statements made after ad 70 back into the earlier period without possibly mixing the sociology of Mishnaic Judaism with that of the earlier period. It is quite possible that Maynard-Reid can establish each of his points, but the data is not in this book.

It is also disturbing to find the sudden conclusion to the work. The streams from the four passages are never drawn together, but the work simply ends with a call to care for the oppressed. James ends with a call to endure for ‘the Judge is at the door’. This seems far from ‘take up the cause of the oppressed’. Again, Maynard-Reid may be able to establish this conclusion as being implied in James (as he well establishes James’ interest in the poor and his viewing the rich as outside the church), but the argument needed to do so is simply not present.

In short, this is a good book, but it is a good beginning. It is not a conclusion, but a helpful basis for further study. It goes somewhat beyond previously existing literature, but not far. We look forward to others building on this foundation and extending the arguments it begins.