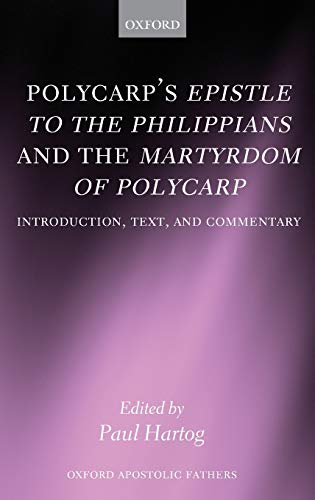 Polycarp’s Epistle to the Philippians and the Martyrdom of Polycarp

While many Evangelicals have paid a great amount of attention to NT texts, few have considered the value of a set of writings known as the Apostolic Fathers. The designation “Apostolic Fathers” refers to a circle of authors who are known, or are considered to have had personal relations with some of the apostles, but were not apostles themselves. These writers have been so influenced by the apostles that their writings are considered echoes of genuine apostolic teaching. They are the earliest Christian witnesses beyond the documents of the NT and are critical for our understanding of early Christianity. The earliest were written late in the first century. The latest can be dated at the end of the second century.

The writings of the Apostolic Fathers are diverse, being composed of different literary styles. There are letters such as First Clement and the Epistle of Barnabas. There is an early Christian homily called Second Clement. There are a series of letters from Ignatius of Antioch written before his martyrdom. A text that comprises a variety of traditions called the Didache is also a part of this group of writings. The Apostolic Fathers also have a visionary experience of Hermas of Rome which is recorded in the Shepherd of Hermas. Within this group of writings are two fragmentary works—the Fragments of Papias and the Fragment of Quadratus. An apologetic document called the Epistle of Diognetus and the pseudepigraphic letter Epistle of Barnabas are also contained in the Apostolic Fathers.

There are two documents that concern Polycarp. The first, Epistle to the Philippians, is a letter from Polycarp written to the Philippians. This letter is the only surviving document that we have written from Polycarp. This letter was written in response to a letter from the Philippian church. It addresses a leader who was greedy, a bishop named Valens. It also contains an explanation of true righteousness as being an outflow of true belief. Bad behavior was evidence that those outside of the Christian faith had infiltrated the ranks of the Christian community. As other documents within the Apostolic Fathers, Polycarp’s Letter to the Philippians warns Christians against heresy.

The second document within the Apostolic Fathers that pertains to Polycarp is the Martyrdom of Polycarp. This narrative is the oldest preserved martyrdom account in Christendom outside of the NT. It displays Polycarp’s martyrdom which reveals his faithfulness to Christ. The document is “a martyrdom in accordance with the gospel” (Mart. Pol. 1.1). It encourages the readers to imitate his faithfulness, praises other martyrs, and warns others not to fall away from the faith during persecution. It is specifically written in the form of a letter from the church at Smyrna to the church at Philomelium, but generally written to all Christian churches. Evarastus is stated as the author of the text (Mart. Pol. 20), but it is likely that others from the church in Smyrna helped.

This volume from Paul Hartog, Associate Professor at Faith Baptist Seminary in Ankeny, Iowa, provides a significant contribution to our understanding of these two documents and also to our comprehension of Polycarp. It is part of an English language commentary series from Oxford Apostolic Fathers that provides significant explanation on these writings.

Hartog’s work provides a helpful biography about Polycarp. In his overview section, he discusses the place of Polycarp in Early Christian writers, the life of Polycarp, fragmentary evidence concerning Polycarp, the understanding of Polycarp as bishop, Polycarp’s relation to other apostles especially John, and then so-called other Polycarpian writings such as the Pastoral Epistles and the Epistle of Digonetus. Hartog also compares Polycarp’s influence that may make him the anonymous presbyter in Irenaeus’ writings. Hartog’s treatments of these issues are thorough. Many times students of the Apostolic Fathers must go to other sources to get this information, but Hartog has helpfully placed these all together at the front of his volume.

This volume also provides an extensive introduction to both letters. These include comments on the historical setting, text and manuscript tradition, authenticity, integrity, date of writing and martyrdom, genre, occasion, purpose, themes, intertextuality, relationship with Paul, Polycarp’s theology, his opponents, discussion on greed, influence of the letters, view of martyrdom, discussion of tension between Jews and Christians, anti-Montanism, legal issues, and prayer. While there are other introductions for these documents in the Loeb classical library edited by Ehrman or in translations by Holmes, Hartog’s volume contains a 57-page introduction about the Letter to the Philippians and a 75-page introduction to the Martyrdom of Polycarp. It is the most comprehensive and up to date introduction to these letters, distinguishing it from other volumes on Polycarp.

Equally extensive is the bibliography that comprises 31 pages. Hartog refers to sources that date from the nineteenth through the twenty-first century. The bibliography contains French, German, and Italian scholarship.

This volume also provides a fresh English translation of these two documents. The Greek and Latin text is placed on the left page with the English translation on the right facing page. As a result, it makes translation comparison easy. Each verse within the Letter to the Philippians and the Martyrdom of Polycarp has a comment. Several of these comments are lengthy, filling several full pages. There are also lengthy discussions of critical issues and key interpretive questions.

An example of the depth and type of his investigation can be seen from his comment on Letter to the Philippians 9.1, which concerns an exhortation to obey the word of righteousness. This was seen in the lives of Ignatius, Zosimus, Rufus, and Paul. When Hartog comments on the context of the exhortation, he notes that the instructions on righteousness in this epistle reach a climax within the dialogue regarding endurance and martyrdom. He then refers to righteousness from earlier in the Letter in chapter 3. He comments specifically on the grammar of the section citing the Greek word for obedience (πειθαρχεῖν) and blessedness (μακάριος). He also notes the intensive use of the word αὐτῷ which is used to emphasize Paul himself, who stands at the end of the passage as a true hero.

His remarks also contain historical considerations of the martyrs Ignatius, Zosimus, and Rufus. He notes that there is no place in the Ignatian correspondence that we have regarding Zosimus or Rufus. The characteristics of these men can only be gained from Polycarp’s description that they endured, were blessed, were seen by the Philippians, grouped with Ignatius, and were not from the Philippian church. Their honor due from the Lord, their suffering, and their denial of this world from Letter to the Philippians 9.2 can be added to our understanding of these men. With this knowledge, he cites the comments from Zahn who suggested that Zosimus and Rufus were Bithynian Christian prisoners sent by Pliny to Rome. But he does not find any evidence of this and agrees with Camelot that nothing else can be known about these companions of Ignatius. It is a thorough explanation of this important passage in the Letter to the Philippians and is exemplary of the way that Hartog handles matters in other sections of the Letter and the Martyrdom.

Students and scholars of the early church and patristic theology will be highly interested in this book. Those who are interested in the influence of the NT in the followers of the apostles will be interested as well. It is sure to be a major reference point for further studies on Polycarp.