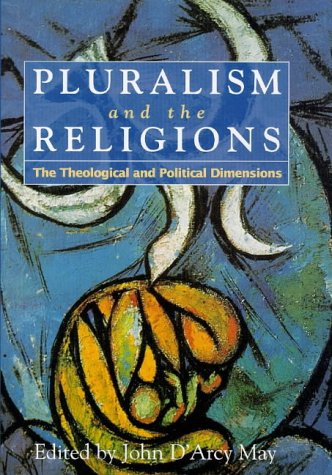 Pluralism and the Religions: The Theological and Political Dimensions

Written by John D’Arcy May (ed.) Reviewed By Chris Partridge
Mission and Culture

Originally the main papers read at a 1995 conference at the Irish School of Ecumenics in Dublin, there are six chapters: two by Asian theologians, Wesley Ariarajah and Rosario Narchison; two by theologians of dialogue, Gavin D’Costa and Paul Knitter; and two by feminist thinkers, Ursula King and Pia Gyger. Part One tackles the theological issues and Part Two examines the political challenges inherent in religious pluralism.

The first chapter by Ariarajah provides an interesting overview of particularly the World Council of Churches’ approach to mission and interfaith dialogue. In particular, he demonstrates and celebrates the shift of missiological emphasis from conversion to ‘mutual witness’ that has taken place as a result of the pressure of ‘interreligious reality’. In so doing he criticises the exclusivist approach taken by Hendrik Kraemer and Lesslie Newbigin as the remnant of a bygone era which ignores the revolution that has taken place in Christian thinking. Indeed, all who work with a similarly conservative theology are urged to leave behind their ‘tribal god’ and ‘narrow understanding of salvation history’ and embrace ‘the wider ecumenism’, the ‘ecumenism of religions’. (With the exception of D’Costa’s contribution, this pluralist mantra can be discerned in all the papers.)

The second chapter by D’Costa is an unsystematic and, it has to be said, unconvincing treatment of two paintings which deal with the doctrine of the Trinity: Andrei Rublev’s The Trinity and Jyoti Sahi’s The Word Made Flesh. Although some interesting points emerge, such as the importance of the Trinitarian dynamic in the Christian dialogue with the Other, one cannot help feeling that a more creative and constructive essay is in there waiting to get out.

Chapter Three by Ursula King, which would have made an excellent second chapter, since it follows on nicely from Ariaraja’s discussion, examines the issue of interreligious dialogue from the perspective of women. Noting that the initiative in interfaith work has often been taken by Christians, and that it has historical roots in earlier colonial and missionary activities, she cogently argues that it is ‘linked to strongly established patriarchal structures and androcentric modes of thought’ (40). After commenting on the conspicuous lack of women involved in prominent interfaith endeavours, she indicates how interreligious dialogue is both challenged by and a challenge to feminism. Although I disagree with King’s apparently pluralist presuppositions, I found her overall thesis convincing and challenging. ‘Women’s great invisibility, marginality and voicelessness in world religions are paralleled by the marginality and voicelessness of women in interreligious dialogue’ (52). This needs to change.

In the first chapter of Part Two, Narchison provides an engaging argument for a multifaith approach to ‘theological education for pluralism’ in India. More particularly, he argues for a concerted attempt to secularise India, ‘secularisation’ being ‘the will to breathe the air of freedom, to grow in a context of pluralism, to make room for views other than those of the churches/religions. Pluralism and secularism are two sides of the same coin; education for pluralism means education for secularism’ (67). Although his thesis is interesting and inspired by an obvious concern for the future of India, it seems too idealistic to be politically helpful and too ideologically pluralist to appeal to the many mainstream Muslims, Sikhs, Christians and revivalist Hindus of contemporary India.

In the penultimate chapter Paul Knitter expounds a thesis with which he has been concerned for some years, namely the idea of a ‘global ethic.’ Clearly aware that the possibility of such a project is seriously questioned by many postmodern theorists, he nevertheless seeks to demonstrate that (a) an interfaith ethic possible, (b) it can serve as a universal criterion for truth without (c) becoming a new foundational norm. Although this makes for an engaging discussion which raises several interesting points, it suffers from a couple of serious flaws. Firstly, his argument that there is ‘a shared diagnosis and remedy for the human predicament’ is dodgy to say the least. It certainly fails to take seriously the difference between, for example, those faiths which believe humans to have a fundamental misunderstanding of their relationship with Ultimate Reality and those which speak of some form of separation between humanity and the Ultimate Reality. More significantly, because the nature of the problem determines the nature of the solution, in smudging the differences at this stage he fails to adequately address the far more important soteriological differences between the religions. Secondly and similarly, his desire to see the faiths of the world united around an ethic of ‘eco-human well-being’ doesn’t take seriously enough the variety of ethical responses to what is best for humanity and the planet. Thirdly, if the peoples of the world were able to agree over this matter, it is very unlikely that this most basic of agreements, which would always be heavily qualified, would constitute ‘a walkable path’ toward the solution of other disagreements including religious ones. Although peace, happiness and global co-operation would be nice, the words ‘get real’ spring to mind. Certainly some consideration needs to be taken of the seriousness with which people take their faith. Indeed, a long hard look at the emergence of ‘fundamentalisms’ around the world might also be in order.

In the final and shortest essay by Pia Gyger, Knitter’s call to action for the sake of the planet is repeated. Expounding a thesis which will have many new agers nodding approvingly, and which is clearly indebted to the work of Teilhard de Chardin, she urges us to abandon our dualistic thinking and informs us that ‘the unification of the family of humanity’ ‘is a necessary human development that cannot be avoided’. This latter point, it seems to me, rather undermines the important warning in both essays that unless we act later generations will face serious eco-human problems.

Although I disagree with many of the authors’ presuppositions and conclusions, I did enjoy the book and was genuinely challenged and stimulated by most of the papers. I recommend it as a short, accessible introduction to contemporary liberal/radical thought on the subject.