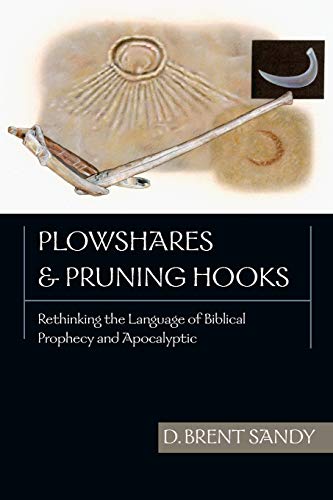 PLOWSHARES AND PRUNING HOOKS: RETHINKING THE LANGUAGE OF BIBLICAL PROPHECY AND APOCALYPTIC

Plowshares and Pruning Hooks is a readable, uncluttered and yet well-documented journey into basic aspects of the Prophetic and Apocalyptic language of the Bible. D. Brent Sandy argues that the prophets should not be read with a simplistic literalism, but instead be considered within their scriptural tradition and according to the poetic nature of their language.

The first two chapters set the stage by showing the power and challenges of prophetic language: the prophets articulate in a multifaceted way the unfathomable depths of God’s love and wrath in the context of an obstinate humanity in need of a wake-up call and repentance. How then should we read their poetic language? Sandy answers this question in the heart of the book, chapters 3 through 5. When we interpret the prophets we must pay careful attention to the ambiguous and elusive character of their highly metaphoric language. Thus, the poetic from of prophetic language must be submitted to the primary function to which it was put to use, namely to call Israel to repentance lest they perish in their disobedience. Drawing on the covenantal language of the Pentateuch, the prophets not only set out in vivid language the litany of curses that would fall on those who persisted in disobedience but they also painted in bright colours the blessings the God of love would shower on those who return to him and his covenant. Having set out the underlying purpose of prophecy, Sandy focuses on a particular aspect of prophecy in chapters 6 and 7, prediction. Prophetic prediction, which must be subordinated to the primary prophetic function of prosecution and persuasion, is not primarily about an exact and detailed delineation of future events. Rather as we see when we consider how prophecies have been fulfilled, we are to expect prophetic prediction to be fulfilled in ways we cannot imagine; our task is not to ponder how they will be fulfilled, but to seek to understand how God warns, encourages and consoles us in them.

This book has only one flaw that is worth mentioning. There is a surprising lack of any discussion of a christological hermeneutic in the interpretation of prophecy. Sandy does talk about particular messianic prophecies and apocalyptic messianic expectations, but fails to sufficiently discuss the hermeneutical implications of the statement that ‘everything revolves around Jesus as Messiah’ (205). Perhaps this reflects the common mistake among evangelical biblical scholars to privilege authorial intention (which has its place) over what might be called the canonical intention of the Scripture. How a passage or book functions in the canon as a whole is more important for a Christian than what the original author(s) may or may not have indented. If Christ is the centre of the Scriptures, in whom God’s promises are most fully fulfilled, we must ask how prophecy. Apart from this, the book is a thoroughly theological, faithfully biblical, and pedagogically sound guide on how God speaks to his people through the oracles and visions of the prophets. Plowshares and Pruning Hooks would be an excellent textbook for introductory classes on the Prophets as well as a welcome sight in the homes and churches and evangelicals who have been misled by an often flat and misguided dispensational approach to prophecy as primarily detailed prediction.