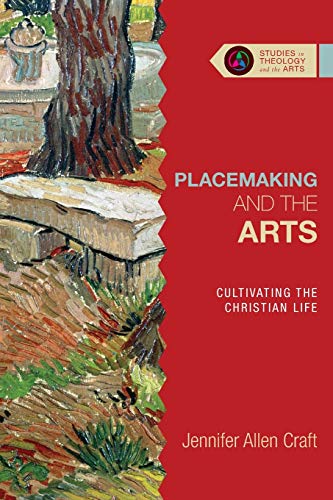 Placemaking and the Arts: Cultivating the Christian Life

The literature on the positive intersection of contemporary art and Christianity is small; more often, the two are pitted against one another. Since 2016 InterVarsity Press Academic has responded to this dearth with a series called Studies in Theology and the Arts, which includes Jonathan A. Anderson and William A. Dyrness’s Modern Art and the Life of a Culture (2016), and Cameron Anderson’s The Faithful Artist (2016). The most recent addition, Jennifer Allen Craft’s Placemaking and the Arts: Cultivating the Christian Life addresses notions of place and artmaking to a predominately academic, broadly Christian audience that includes art novices, art practitioners (artists, curators, art critics, art museum professionals, art history professors, etc.), art patrons and collectors, and finally, cultural scholars who may see art, craft, and visual culture as supporting examples for other theoretical investigations. Craft advances an argument for the value of the arts and art (terms she uses interchangeably) in the natural world, the home, the church, and society. Her central thesis is this:

The arts are a form of placemaking, that they “place” us in time, space, and community in ways that encourage us to be fully and imaginatively present, continually calling us to pay attention to the world around us and inviting us to engage in responsible practices in these places. (p. 2)

Therefore, art, according to Craft, uniquely allows Christians to become producers and sharers in the global economy, and to responsibly care for the land and sojourner.

Two questions drive her study: why place and why art? In the first chapter, she defines place, placemaking, a sense of place, and art. Place is “a location, an experience, a community, a set of relationships, memories, and habits, a measurement of time and history” (p. 8); placemaking is “our actions in a place” (p. 11); and a sense of place is “our imagining of and love for the places the communities in which we are called” (p. 16). However, art is never fully addressed (except strangely by novelist Wendell Berry). This underdeveloped definition of art is especially pronounced when contrasted with the scholarship, for example, on place and space, or, in chapter three, craft. Instead, art is understood as “one particular and paradigmatic form of this type of hospitable placemaking … [or as] a significant catalyst for the development and practice of a theology of home” (p. 87), or as a “characteristic feature” (p. 219) of placemaking. Functionally, it “help[s] us participate more deeply and meaningfully in the corporate life of worship in the church” (p. 124) and “also teaches us to love, our sense of place being defined as love of place” (p. 229). In short, art’s definition hinges on place. In other parts of the book, art is related to beauty and the handmade, two tricky strands of inquiry. Finally, while Craft uses case studies at the end of each chapter to advance her theory, the art examples appear as illustrative rather than unfolding alongside her argument.

The second chapter considers placemaking and theology in relationship to the natural world of creation, incarnation, and new creation. Asking how the arts can expand that theological framework, Craft points to the imago Dei (“image of God”) as “part of the theological root system for a theology of the arts and placemaking” (p. 31). Citing the Genesis creation story, Craft explains creation and the process of naming as a kenotic act of love amongst the Father, Son, and Holy Spirit. Artists (whether identifying Christians or not) mimic this trinitarian, kenotic love through the act of making. Moreover, because the imago Dei is best reflected in Christ’s sacrifice on the cross, this allows people the freedom to accept their identity as placemakers in the natural world who give order to nature and places. Land artist Christo and the late Jeanne Claude’s installations are cited because their wrapping of buildings, land, etc., changes people’s perspectives and the way they see the world.

Craft and craftmaking are highlighted alongside the domestic home in chapter three, which also considers homelessness and consumerism. The author’s thesis is that art, which is concerned with a theoretical understanding of home and the cultivation of a beautiful home, can combat the negative effects of modernity, including homogenization, individualism, and anonymity. By making art in or about the home (a foundational site for identity and memory) and beauty, it allows one’s most intimate space to be put on display for others as an act of hospitality.

In chapter four, Craft focuses on the role of temporary art installations and permanent art in church buildings. Cementing her analysis of art in relation to divine beauty, Craft argues that art in liturgical spaces aids worship, encourages divine-human encounters, helps one feel a sense of belonging, enables mission mindedness, and conveys an eschatological sense of home. Since art fosters people’s sense of belonging corporately in the church, it frees people to invite others to feel welcome and simultaneously points to the tension of living as sojourners on earth while longing for the fullness of God’s kingdom.

In chapter five, Craft discusses the role of art in society by looking at political, ethical, and social issues surrounding displacement, refugees, and borders. Similar to its role in the church, art in the public sphere—as something that contributes to people’s sense of place—has, for Craft, the ability to motivate actions in community because art navigates paths of placement and displacement while pointing to the hope of a new creation. Art—she gives an example by Ai Weiwei—can transform the public square by creating spaces for ethical social practices and reimagined beautiful public spaces as a tool for kingdom living.

In her final chapter, Craft outlines a theological model for the arts. Generally, she calls Christians to engage with the arts more deeply in all spheres of their lives on earth. Specifically, for artists, she contends that as they make art and engage in responsible placemaking “they can share in the creative and redemptive work of Christ in the world” (p. 227).

Overall, Craft’s study foregrounds placemaking and art by conceiving of art as a helpful tool that allows Christians to be productive citizens in the public and private spheres. The book’s goal is to motivate Christian audiences “to cultivate an aesthetically engaged sense of place, along with the development of a placed theology and practice of the arts” (p. 201). There are many useful nuggets here, especially in relationship to theories of place, displacement, and practical application. Moreover, Craft’s theological arguments are spot on, although her eschatological reading of place for the Christian could have appeared earlier in the book.

At the same time, however, the book appears to display an understanding of art tied to function. This diminishes its engagement with the broader conversation happening outside Christian circles about contemporary art in the gallery, the museum, the marketplace, and the art world, and the complex art historical and theoretical paradigms framing those debates. In 1967, Susan Sontag wrote, “Once the artist’s task seemed to be simply that of opening up new areas and objects of attention. That task is still acknowledged, but … art is certainly now, mainly, a form of thinking” (Sontag, “Aesthetics of Silence,” Aspen 5–6). That division between the cerebral and functional continues to inform much of contemporary art practice. Chapter five hints at this complicated situation inviting curious readers to begin with Craft and then dive much deeper into the discourse surrounding visual art, orthodox Christianity, and the space between the two in the twenty-first century.