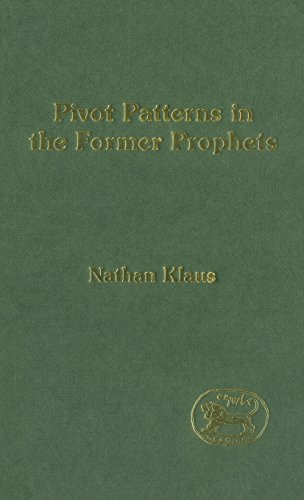 These two new dissertations on Biblical Hebrew narrative seek to add precision to the analysis of story-telling. Klaus looks at patterns of stylistic repetition in order to discover clearer criteria for positing concentric structures. Heimerdinger attempts to go beyond text-linguistics into literary analysis and especially to discover linguistic features that are motivated by pragmatic concerns. Both therefore help us to understand and evaluate the contribution of studies of stylistic repetition and linguistic usage. The latter is more specialized and scholarly in scope and involves knowledge of Hebrew, unlike the former.

One way to illustrate the two approaches is to compare their analysis of 2 Samuel 12:16–20. Klaus (110–117) finds an outer frame in David’s fast and his breaking of the fast (A: v. 16–17; A´: v. 20), which encloses the boy’s death on the seventh day and David’s question about his death (B: v. 18; B´: v. 19b). Inside these repetitional frames we read ‘and the servants of David feared to tell him’ (C: v. 18a) in parallel to ‘but when David saw that his servants whispered’ (C´: v. 19a), exhibiting a word play in Hebrew on ‘fear’ and ‘see’. It encloses the climax of the paragraph, the pivot of the servants deliberations in verse 18b, and it focuses on the contrast between despair and hope. Heimerdinger’s discussion of 2 Samuel 12:19 focuses on how the name David is repeated three times in a deliberate slowing of the action by breaking it into three separate phases and centering the attention on David (154). He also discusses the chain of ten wayyiqtol verbs in 12:20, and believes that there is no peak and no crisis involved (73), even though David’s behaviour when informed of the boy’s death is the most surprising feature of the whole story.

As for detail, Klaus, an Israeli scholar, often includes less well known Jewish scholarship. He is healthily critical of readings which have no firm formal basis but are largely thematic guesswork. Notably, he restricts his analysis to concentric patterns, i.e. literary repetitions with a central piece as climax (thus distinguishing pivot patterns from chiastic arrangements). This means he focuses on only 25 examples from the books of Joshua–Kings. Even if this allows for a careful and well presented case, it does not provide a very broad basis for analysis.

Heimerdinger, who teaches at London Bible College, has specialised in linguistics and his work is much more challenging at a scholarly level. Most linguists could benefit from his work were it not for the unvocalised Hebrew, and most Hebrew scholars would benefit from the presentation were it not for their lack of modern linguistics training. Personally I find his work both a disaster and a gem, all in one! Heimerdinger is not aware of important scholarly work by Walter Gross and others in the mid-1990s, so his presentation is to some extent outdated. Further, he directs an almost personal vendetta against one of the masters of Hebrew text-linguistics, Robert E. Longacre, and I find his attack unbalanced, uninformed and unfair. Yet at the same time he exploits some of the best modern theory on pragmatic information structure and artificial intelligence, and in this regard provides the most important work so far on topic and focus in the Hebrew Bible. However, the present shape of his thesis means that only the latter part should be studied carefully by anyone working in Hebrew language and text analysis.