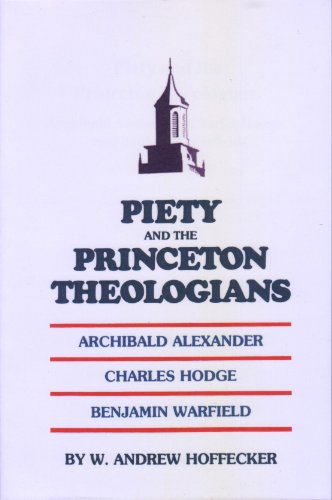 Piety and the Princeton Theologians

In support of his thesis Hoffecker directs attention to the three great Princeton theologians of the nineteenth and early twentieth centuries: Archibald Alexander, Charles Hodge, and B. B. Warfield. Each man is considered from the vantage point of his own religious experience, his systematic writings, and writings of a more devotional nature.

Alexander, who in 1812 came from a Philadelphia pastorate to become Princeton’s first professor, is shown to have placed a high priority on personal communion with Christ through the maintenance of a regular devotional life. It is true that Alexander opposed the emotional excesses of certain contemporary revivalists. Nevertheless, his entire theology was built about an intuitional apprehension of God through the Scriptures. The purpose of the objective Word of truth is to guide and regulate subjective religious experience. According to Hoffecker, it was Alexander’s strong conviction that Presbyterian orthodoxy must be wedded to a vital spiritual piety.

By any standard Charles Hodge was the leading light of the old Princeton school. His theological studies in Europe and his opposition to the subjectivism of Schleiermacher have prompted some to judge that in his commitment to Wissenschaft Hodge lacked religious Gefühl. Yet Hoffecker documents the fact that Hodge enjoyed a vital relation to Christ and that through his extensive preaching ministry he ministered experimentally the things of God to large numbers of people. Hodge’s systematic writings followed Scottish philosophy and the method of induction, whereby theological conclusions were drawn from the data of Scripture. Consequently Hodge viewed theology as a science. Yet Hoffecker shows that Hodge’s theological method required that the facts of religious experience should be admitted along with the objective facts of Scripture. Hodge thus strove for both a theology of the Word and a theology of the religious affections. Only, unlike Schleiermacher, Hodge’s religious sentiments must not be at odds with the objective word of Holy Writ. Thus Hoffecker shows that in Hodge as in Alexander scientific theology is complemented by a rich personal experience of God through the Holy Spirit.

Finally Hoffecker explores whether Warfield, with his intensive commitment to an apologetic method, is not guilty of a scholasticizing tendency. He shows that in the face of the mounting tide of liberal theology late in the nineteenth century Warfield found it necessary to wield the sword of apologetics both to refute opponents and to advance the Christian cause. True, Warfield was an assiduous scholar who lived with his books. Yet Warfield was committed to the ideals of living in communion with God and of being filled at all times with the Holy Spirit. Moreover, for Warfield, apologetics was not an end in itself. Rather apologetics was viewed as but a prolegomenon to theology. And the chief task of theology was the proclamation of the gospel of God’s redemptive grace. Furthermore, Warfield was insistent that no amount of argument could dissuade a person from false allegiances or compel evangelical faith. Only the Holy Spirit operative in the heart could achieve such divine purposes.

Hoffecker acknowledges that in his quest to call forth faith Warfield gave first place to the indicia, whereas Calvin stressed the datum of the testimony of the Holy Spirit. The reason for this reversal of priorities, however, is that in Warfield’s day historic faith was in sufficient decline as to warrant an apologetic appeal to rational arguments invoking the indicia. Yet quite apart from tactics, Warfield was insistent that from beginning to end salvation is all of God through the Spirit. Hence, in terms of the relation between the objective and subjective, Hoffecker concludes that Warfield is far closer to Calvin than to theological scholastics.

Hoffecker has succeeded in large measure in demonstrating that each of the Princeton theologians had a concern for both soundness of doctrine and for vital religious experience. In the case of each, theology and piety were correlative. The reader, as he follows Hoffecker’s expositions of the Princeton divines, is bound to be challenged by the scholarly competence and by the vital relationship with God that each possessed. In terms of these two polarities the old Princeton divines, like their Puritan forebears, have much to teach the church today. Piety and the Princeton Theologians is an important book that is certain to inform the mind and to challenge the heart.