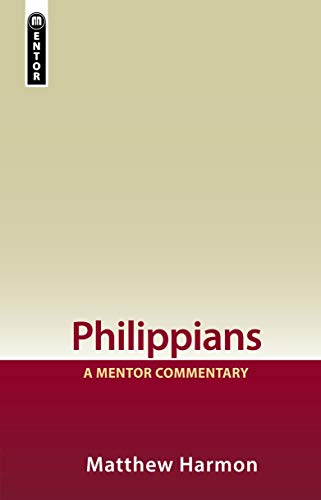 Matthew Harmon teaches NT at Grace College and Theological Seminary and preaches to Christ’s Covenant Church in Winona Lake, Indiana. This commentary exemplifies his twofold ministry focus, in the academy and to the church. For those who labor in the academy, Harmon knowledgeably and sensibly addresses the interpretive questions and theological issues raised by Paul’s epistle to the first-century congregation in Philippi, a Roman colonial city in Macedonia. For pastors and other teachers who serve the church, our author models conscience-challenging application to Jesus’s twenty-first century saints as the fruit of careful exegesis and theological reflection. As a homiletical bonus (not found in all Mentor Commentaries), Harmon closes each section of exegesis with “suggestions for preaching/teaching and application.”

Although the commentary’s focus is the exposition of the epistle’s message to its original recipients and later audiences, issues on which there has been critical debate are addressed responsibly. In view of the apparent frequency of two-way communications between Paul in chains and the church in Philippi, the provenance of the epistle—whether the apostle wrote from imprisonment in Rome, in Ephesus, or in Caesarea—has been debated. Having weighed arguments in favor of Ephesus (a short voyage across the Aegean Sea from Macedonia) and Caesarea Maritima in Palestine, Harmon concludes in favor of the historic view that Paul wrote from Rome while awaiting review of his appeal by the Emperor (pp. 35–43). This conclusion has obvious bearing on the interpretation on the life-or-death outcome that the apostle anticipates in Phil 1:19–26.

The integrity of the epistle is defended against proposals that its present form represents a hypothetical merging of two or more pieces of Pauline correspondence (pp. 43–45). The “seams” that appear to mark inexplicable shifts in tone (e.g., from 3:1 to 3:2) are plausibly explained. Moreover, the structural observation suggesting inclusio at 1:27–30 and 3:20—4:3 (linked by citizenship terminology and the summons to stand together) reinforces the argument that 1:27—4:3 has an overarching coherence of theme and purpose (pp. 46–47, 157–161).

Against ancient and more recent proposals that external opponents—Paul’s rivals (1:15–18), the Philippians’ adversaries (1:28), advocates of circumcision (3:2–3), those who “walk” as enemies of Christ’s cross (3:18–19)—are a single group (perhaps Jewish Christians resistant to Paul’s evangelization of Gentiles), Harmon concludes that Paul has different dangers in view, some threatening physical persecution and others spiritual deception (pp. 47–50). Touching on points in which the New Perspective on Paul takes issue with classic Protestant understandings of Pauline soteriology—whether πίστις Χριστοῦ designates Christ’s faithfulness instead of the believer’s trust in Christ, and whether Paul affirms forensic imputation of Christ’s righteousness to subjectively unrighteous believers–Harmon defends the classic Protestant interpretation of Philippians 3:9 in its context (pp. 339–43, especially notes 129, 132).

Harmon alerts us to Paul’s use of the OT, even in this letter to an overwhelmingly Gentile congregation. Philippi seems to have had only a small Jewish population and no synagogue when Paul, Silas, and Timothy arrived (Acts 16:13), so it is not surprising that this epistle lacks the explicit OT citations that saturate Paul’s epistles to Galatia, Corinth, and Rome. Yet Israel’s ancient Scriptures so saturated Paul’s mind that Philippians nonetheless bristles with allusions to OT passages and turns of phrase, notably but not exclusively in the Christ-hymn of 2:5–11, which extols Christ as the later, greater Adam and the suffering and glorified Servant of the Lord foreseen in Isaiah (pp. 57–66; 201–3). Allusions to Deuteronomy 32:5, Daniel 12:1–4, Isaiah 42:6 and 49:6 set Gentile Jesus-followers in Philippi apart from a “crooked and twisted generation” of ancient unbelieving Israelites (2:15) (pp. 255–59). The list of OT allusions could go on.

Although my own conclusions on Philippians’ exegetical questions typically align with Harmon’s, occasionally we part ways. Two examples will have to suffice. We both recognize Paul’s strategy of teaching by way of example throughout this epistle: “Christ the Exemplar” preeminently (2:5–11), but also Paul’s co-workers Timothy and Epaphroditus (2:19–30) and Paul himself (3:1–14). I see Paul starting even earlier to use his own situation and attitude as a model for responding to suffering and to competition. This seems to be the ulterior motive behind his description of his situation in chains, awaiting a life-or-death verdict and “afflicted” (so they think) by some who see themselves as his rivals (1:12–26). Harmon does not disagree, for he writes about Paul’s conclusion in 1:24, “Paul here models what he will later ask the Philippians to do—think of others more highly than oneself. . . .” (p. 149). But the sharp structural divide drawn between sections characterized as about “the progress of the gospel” (1:12–26) and about “living as kingdom citizens” (1:27—2:18) risks separating Paul’s exemplary stance toward suffering and rivalry, on the one hand, from the Philippians’ need to stand in suffering and (1:27–30) and to renounce rivalry (2:1–4), on the other. Gordon Fee’s observation that Philippians exhibits the alternation of news about author and readers, characteristic of Hellenistic letters of friendship, invites a closer comparison of Paul’s exemplary response to suffering and rivalry to the Philippians’ need in those areas (Paul’s Letter to the Philippians, NICNT [Grand Rapids: Eerdmans, 1995], 2–14, 54–55).

In Philippians 1:19 Paul expresses confidence that he will receive “salvation/deliverance” (σωτηρία) through the Philippians’ prayers and the Spirit’s assistance. Is this “deliverance” his imminent release from Roman custody (so G. F. Hawthorne and R. P. Martin, Philippians, rev. ed., WBC 43 [Nashville: Thomas Nelson, 2004], 49–50), or ultimate spiritual/eschatological salvation? Harmon concludes the latter, citing Paul’s use of σωτηρία and σῴζω elsewhere to refer to spiritual salvation, his preference for ῥύομαι when speaking of physical deliverance, and the probable allusion here to Job 13:16 (pp. 132–35). This is the more plausible alternative, since in what follows Paul seems still to wrestle with the alternative outcomes of life (release) or death (execution) (1:21–26; see 2:17, 24). Isn’t there, though, a third alternative, a spiritual and semi-eschatological interpretation that understands “salvation” in light of Paul’s completion of his sentence in 1:20? If his impending appearance before the Emperor is the situation in which Paul expects and hopes that he will not be ashamed but rather conduct himself in such a way that Christ is magnified, then this Christ-glorifying boldness is central to, even equivalent to, the “salvation” that Paul knows will be his. Such salvation is spiritual, not physical; but it is semi-eschatological, received in the present, not reserved for the consummation. And the prayers of the saints (requested in other prison epistles, Eph 6:19–20; Col 4:3–4) and the support of the Spirit are instrumental in Paul’s salvation from shame over Christ as he stands before Caesar (Rom 1:16; 2 Tim 1:8, 16).

Harmon’s commentary is a felicitous merger of careful scholarship, exegetical prudence, and pastoral sensitivity, a fine exposition of Paul’s warm missive to a congregation whom the apostle tenderly called, with loving redundancy, “my brothers, whom I love and long for, my joy and crown . . . my beloved” (4:1). Pastors, teachers, and other students of the NT and servants of Christ’s church will profit from this volume.