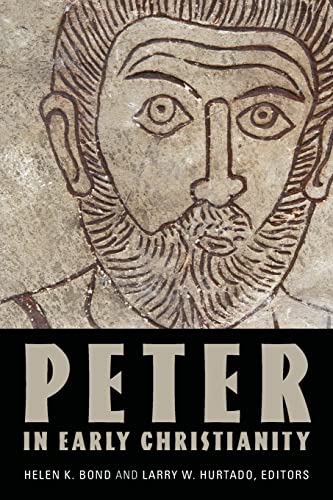 This volume is a compilation of essays representing “the highlights of a conference organized by Edinburgh University’s Centre of the Study of Christian Origins in July 2013” (p. xvi). Most of the nineteen contributors occupy academic posts across the United Kingdom.

Peter in Early Christianity contributes to the flow of interest in the Apostle Peter over the last 15 years, after a long period of Peter “playing second fiddle to Paul” (p. xvi). Through its range of essays, pitched to an academic audience, it furthers our understanding of Peter through both its breadth and its depth. Since the volume is comprised of nineteen quite distinct essays, this review seeks to succinctly summarize the main argument of most chapters, with limited scope for critique.

Overall, there is a logical, chronological arrangement of essays, moving from studies pertaining to Peter’s background, geography, context, and names, through to discussion of Peter’s place in the Gospels, Acts, and Epistles, and concluding with his historic influence upon the church.

The introductory essay by Hurtado leads readers through three representative Protestant portraits of Peter from the past six decades, sympathetically presenting the work of Oscar Cullmann, Martin Hengel, and Markus Bockmuehl. The chapter thus offers an efficient orientation to recent decades of Petrine scholarship.

Chapters 2–6 each consider particular aspects of the historical Peter and his world, namely: research into the fishing industry on Lake Tiberias (Sean Freyne); an analysis of Peter’s names and some discussion as to their significance (Margaret Williams); the affirmation of a likely influence of Peter upon the author of Mark’s Gospel (Helen Bond); a broad endorsement of the historicity of the Petrine speeches in the Book of Acts, with qualifications (Jonathan Lo); and lastly, an interesting argument, based substantially on John 21:18–19, that Peter was not crucified but was burned alive (Timothy Barnes).

Chapters 7–11 examine Peter’s place in the New Testament, as a dominant character as well as an apparent epistolary author. Chapter 7 offers a helpful corrective to the assumptions behind Peter’s lack of “perceptiveness” in the Gospels. The imperceptiveness should not be interpreted as a negative portrayal by Gospel authors, as has been commonly asserted by scholars, but as somewhat typical of those who receive revelation in Scripture (John Markley). Chapter 8 promotes a more nuanced understanding of Peter in recent scholarship by observing Peter’s development in John’s Gospel, which sees Peter mature and learn submission (Jason Sturdevant). Chapter 9 considers Peter in Luke-Acts, but uses the “negative” and “positive” categories rightly deemed unhelpful by authors of chapters 6–7 (Finn Damgaard). Chapter 10 offers a convincing demonstration of the ways in which the NT texts, and other early writings, present Peter as clearly literate (Sean Adams). Chapter 11 (Matthew Novenson) stands or falls with the validity of the author’s assumption that both of the Petrine epistles are pseudonymous. For those who consider one or both of the Petrine epistles to be authentically Peter’s (see, for example my First-Century Guides to Life and Death: Epictetus, Philo and Peter [Milton Keynes: Paternoster, 2017]), the essay’s attempt to explain why we have the Petrine epistles at all is, ipso facto, of debatable value.

Chapters 12–18 then examine the place of Peter in later Christian traditions before Markus Bockmuehl concludes the volume with an even-handed critical reflection on the Roman Catholic Church’s relationship with Peter, entitled “Scripture’s Pope Meets von Balthasar’s Peter.” While it seemed, on first impressions, an obscure topic with which to conclude the volume, it does function well to draw together themes of the book while also reconsidering the divide between Roman Catholic and Protestant views over Peter’s relevance for the church today. Bockmuehl suggests each has something to teach the other: Protestants, for example, may have dismissed with inadequate reflection how Jesus’s extraordinary words to Peter (in key texts such as Matt 16:17–19; Luke 22:31–32; and John 21:15–17) do indeed have enduring significance.

While the assumptions of critical scholarship should be open to re-examination and rejection if the evidence points that way, there seemed at times some a reluctance from some contributors to voice confidently views which endorse such positions as the historicity of the accounts in the Gospels and Acts, or Peter’s general competence as a thinker and author (capable of writing 1 Peter), or the close connection between the Apostle Peter and 2 Peter. Perhaps due to the particular conference environment in which these papers were presented, the more conservative findings seem to be couched hesitantly and with significant qualification, while more critical and speculative propositions are offered freely. As one example, Damgaard confidently speculates, “Luke might not only have written a ‘Pauline’ speech for Peter at the Jerusalem council (Acts 15:7–11), he may even have rewritten Peter narratives such as the denial narrative under the influence of Paul’s letters—in this case Paul’s self-portrayal as a persecutor of the church.” (p. 129). In light of the critical tradition this is unsurprising, but it is worth noting that these influences were not without effect.

With that said, the volume makes an excellent contribution to Petrine studies. While undergraduate readers who are unfamiliar with the critical tone of Petrine scholarship might find some essays perplexing, if not disturbing, due to their inherent distrust in the historical reliability of Scripture, the range of topics and the quality of presentation make it, on the whole, an enjoyable and insightful volume.