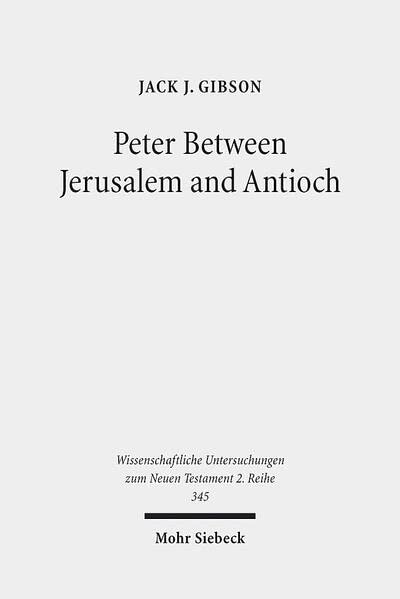 Peter between Jerusalem and Antioch

This monograph is the “slightly revised” edition of Gibson’s dissertation at Trinity Evangelical Divinity School. It stems from Gibson’s long-standing interest in the confrontation between Paul and Peter in Antioch, and seeks to understand why Peter withdrew from table fellowship with the Gentiles as recorded in Gal 2:11–14.

Gibson states in Chapter 1 that he believes it was not vacillation or other commonly held reasons that explain Peter’s withdrawal from table fellowship with Gentiles. While the pre-Pentecost Peter denied Christ out of fear for his own life, Gibson argues that the “Peter of Acts is a very different figure from the Peter of the Gospels” (p. 140). Other social-historical reasons are then presented to explain Peter’s behaviour, the catalyst being the message from the “men from James” (Gal 2:12), which he argues warned of “rising violent nationalism in Judea and the effect that it could have upon the Jerusalem church if it became widely known that a chief Christian leader was eating with the Gentiles” (p. 284). In so arguing, Gibson develops the propositions of R. K. Jewett, “The Agitators and the Galatian Congregation,” NTS 17 (1971): 198–212, which are echoed in the works of scholars such as Bruce, Betz, and Witherington. Gibson attempts the very difficult task of arguing that what others considered plausible is indeed the explanation for Peter’s withdrawal in Antioch.

To defend his assertion that in Antioch Peter would not have withdrawn due to personal fear, chapters 2–3 compare the Peter of the Gospels with the Peter of Acts, focusing on his motives and growth. Chapter 2 is a succinct distillation of a large body of material, characterising Peter from the Gospels as one who “often acts in a misdirected manner” (p. 284). Rather than lacking courage, Gibson suggests Peter’s mistakes and his betrayal of Christ were due “primarily to a lack of understanding of how a faithful disciple is expected to act” (p. 284). While the chapter has strengths, I found this extremely charitable assessment of Peter’s mistakes to be unconvincing. This is a significant concern because Gibson’s conclusions rely heavily upon the “consistency of Peter’s character” (p. 284).

Chapter 3 examines the Book of Acts to continue the characterisation of Peter, arguing that Peter, though consistent in character, was at Pentecost given a “Spirit-inspired understanding” of the truth that precluded him from erring as he had in the Gospels. Quoting Perkins, Gibson boldly claims, “Any failures shown by the apostle during Jesus’ lifetime have been eradicated by his Post-Resurrection transformation” (p. 140). Such an absolute transformation (not of character, but of understanding) undergirds Gibson’s argument that Peter “would not” (p. 285) have compromised the gospel by vacillating out of concern for himself (p. 285). The “consistency of character” argument seems a flawed one, however, not only because it requires and then generates a most charitable estimation of Peter, but because it assumes that people act consistently. King David and others teach us that God’s people have good and bad days, and Paul’s scars for Christ (Gal 6:17) are a sober reminder that if Peter was afraid of persecution, it was reasonable.

Chapter 4 delves into the first-century world of Roman and Jewish relations to argue that the broader social factors, especially the persecution on the horizon for Christians in Jerusalem, provide the most plausible motivation for Peter’s withdrawal from table fellowship. The chapter has value as a historical study of Roman-Jewish-Christian relations in the first-century A.D., but again the possibility that Peter compromised his principles under social pressure or for fear of reprisal, albeit after Pentecost, is not made implausible by Gibson’s arguments.

In Chapter 5 Gibson’s conclusions assume the best of Peter and acquit him of the strongest charges of failure or weakness, but I wasn’t persuaded for a number of further reasons. Firstly, Gibson’s conclusions are difficult to reconcile with Paul’s rebuke. Paul considered Peter fully culpable—he had compromised the gospel in a hypocritical and fearful way (2:12–13). He stood condemned (2:11). While it is hypothetically possible that Peter’s actions were well-intentioned and merely ignorant of their effects (pp. 274–75), that Paul refrained from mentioning Peter’s noble intentions was a most unfortunate and uncharitable omission. It is only if Peter was culpable in the full sense that Paul’s condemnation of him for his “hypocrisy” seems reasonable. We need not concur then with Gibson that Paul’s rebuke was “extraordinarily harsh” (p. 244).

Secondly, the context of Galatians suggests Peter made a similar error to those whom Paul was addressing. Regardless of the high profile of the messenger (whether the Apostle Peter or even an angel from heaven, 1:8), believers were to resist the immense pressure to turn to a different “gospel” (1:6) or to live to please men rather than Christ (1:10). They were to “stand firm” (5:1–2), refusing to buckle under pressure from Judaisers who were urging Christians to follow Jewish practices (6:12). Peter’s failure would thus be an important high-profile case study. That is, “if even the Apostle Peter could compromise under pressure, you too are vulnerable.” In my view, Gibson’s interpretation of 2:11–14 would have benefited from far more attention to the context of Galatians itself. In the index, there are only 26 citations from the surrounding five other chapters of Galatians, compared with over 100 citations from Matthew alone, suggesting the fundamental assistance for interpretation offered by Galatians itself was overlooked in favour of many sources much further removed from Galatians 2.

While I was not persuaded by Gibson’s argument, his work contains many good insights into the Petrine material in the Gospels, the Book of Acts, and Galatians. A further strength is its portrayal of the hostile social setting in which Jews and Christians lived.