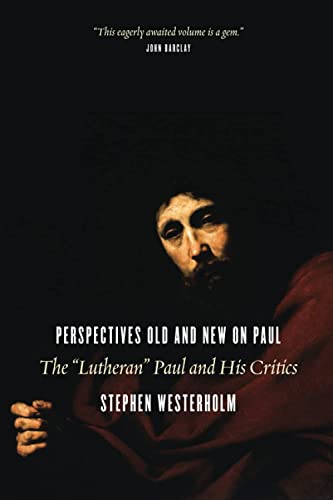 PERSPECTIVES OLD AND NEW ON PAUL: THE ‘LUTHERAN’ PAUL AND HIS CRITICS

In 1988 Stephen Westerholm made one of the more notable contributions to the debate between the so-called ‘new perspective’ and traditional perspectives regarding how to read Paul’s discussions on faith and works with his book Israel’s Law and the Church’s Faith. His work was refreshing and welcome in that he helped to move the discussion forward in important ways but refrained from taking partisan shots at opponents—a restraint that has, unfortunately, been too uncommon in this debate. In this updated work Westerholm enters into dialogue with the offerings of the last decade and a half and includes a substantially enlarged historical survey of Paul’s interpreters. This survey opens the book, covering Augustine, Luther, Calvin and Wesley, and is extremely valuable in highlighting the exegetical care and sophistication of these theological and ecclesiastical giants, while also impressing on modern scholars the humility with which they ought to pursue their work in the light of such a rich tradition.

Westerholm then moves to Paul’s modern interpreters, laying out both objections of modern scholars to the ‘Lutheran’ reading of Paul and the responses of scholars advocating a traditional reading. He covers the field expertly and with fairness toward each interpreter, giving readers an accurate and up-to-date awareness of the state of play in this important discussion. He then deals with technical matters that lie at the heart of the discussion of Paul and the Law, such as the meaning of ‘righteousness’ language in Paul’s letters, and how Paul uses ‘law’ and ‘works of the law’. Finally, Westerholm focuses on the letters of Paul in an effort to determine how Paul’s gospel of righteousness by faith apart from works of the law actually functions ‘in action’.

Westerholm occupies what might be considered a sort of middle position between a ‘new perspective’ angle of approach and the more traditional or ‘Lutheran’ reading of Paul. He agrees with ‘new perspective’ proponents that the historical problem that gave rise to Romans and Galatians was the question of how Gentiles can fully participate in the people of God while not being compelled to adopt Jewish practices. However, he also stresses that ‘Lutheran’ readings of Paul’s letters actually reflect the heart of Paul’s theology—the conviction that sinners are saved by the grace of God without any consideration of human merit. According to Westerholm, it was indeed the ethnic issue of Jew/Gentile relations that Paul was addressing, but the apostle’s fundamental critique of the Mosaic Law was that it demands obedience to its statutes and commandments, the very thing that humanity is incapable of rendering.

Stephen Westerholm’s book is simply required reading for anyone involved or interested in the discussions surrounding Paul, justification by faith, and the Mosaic Law.