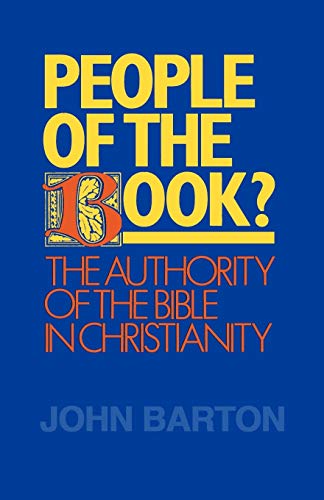 People of the Book? The Authority of the Bible in Christianity

This slim book conveys the substance of the Bampton Lectures for 1988, the most famous of all theological lecture-series which reaches back into the eighteenth century. Time was when the relevant conditions of Canon Bampton’s will were reproduced in the front of the published volume, a practice which has evidently ceased but which underlined the dignity of the exercise. Bampton knew a thing or two about academics: he insisted that the lectures should be published, and enforced his insistence by withholding payment to the lecturer until they were.

The slimness of the volume is unfortunate—unfortunate, at least, for those who would seek here an authoritative and rounded defence and exposition of a post-critical and post-orthodox doctrine of Holy Scripture. The author makes plain his purpose: ‘Christians are not really required to choose between fundamentalism and unbelief … this book is written for those who would like to explore another possibility: a positive but critical evaluation of the Bible, which avoids the absolutes of biblicism but is not simply a watered-down version of it’ (p. xi). So we have a third way on offer, and kind comments on James Barr help the reader of the foreword orient himself for what is to follow. It does not take long for the reader to discover one of the book’s fatal flaws: the writer’s polarization of ‘fundamentalism’ and ‘unbelief’ allows him to collapse the orthodox understanding of Scripture into that fourteen-letter word which, as ever, brings rational discussion to an end.

This process starts on page 1 of chapter 1, where the writer begins to use ‘fundamentalist’ and ‘conservative’ as synonyms, and indeed suggests (in his opening paragraphs) that the ‘fundamentalist’ view of Scripture parallels the traditional Islamic view of the Qur’an. And so on. Dr Barton acknowledges the intelligence (and indeed the attractiveness) of some ‘fundamentalists’, but he believes their best arguments can be reapplied in another context: ‘I am convinced that a robust theory of Scripture is possible without selling out to biblicism’ (p. 3). Had Dr Barton written us a longer book, and engaged seriously with the conservative thinkers who, despite his modest compliments, he continues to lump together as ‘fundamentalists’, we in turn would have had an alternative theory of Holy Scripture with which to grapple. He does not, and neither does he acknowledge (as many will) that the charter for the conservative understanding of Scripture is the historic doctrine of all the church. It may be unfair, but the reader is left with the impression, that Dr Barton’s acquaintance with the view of which this book is an extended critique has been culled almost entirely from the work of James Barr. Certainly, conservatives are conspicuous by their absence from footnotes, index and bibliography. How odd that really is emerges if we imagine the mirror-image of this project: a book seeking to undermine and displace a/the ‘liberal’ view of Scripture—perhaps by the present reviewer—which was based almost entirely on conservative sources. It would be a laughing-stock.

Dr Barton has deliberately opted for a semi-popular style, and this inevitably limits the value of his arguments, since the conservative reader will constantly feel that the orthodox alternative is neither fairly represented nor adequately met. So while People of the Book? makes interesting reading, it is unlikely to change anyone’s mind.