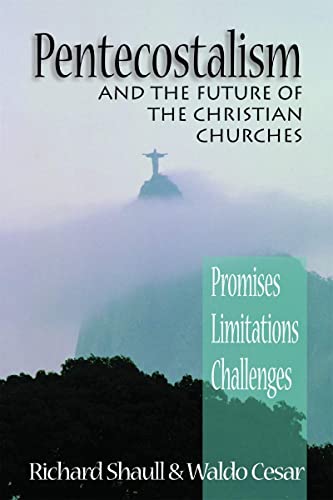 Pentecostalism and the Future of the Churches

This book is written by Waldo Cesar, a Brazilian sociologist, and Richard Shaull, Emeritus Professor at Princeton Theological Seminary. Both are evangelicals but neither have a Pentecostal experience. Although coming from differing disciplines, they share a common interest in the growing impact of Pentecostalism as a world phenomenon. In order to assess the extent of this influence they engaged in field work in Brazil, much of it located in the Universal Church of the Reign of God situated in Rio de Janeiro.

The book is in two parts. In the first section, Cesar offers a theological assessment of Pentecostalism and in the second Waldo seeks both to identify and analyse those aspects of Pentecostalism that he sees as significant in its present growing impact. Despite their conservative mainstream evangelical viewpoint, the two authors have become remarkably warm and positive in their attitude both to Pentecostal experience as well as to the movement’s impact, particularly among the poor.

Cesar who makes use of several personal stories and testimonies, identifies a number of significant facets of Pentecostal worship. Participants are aware of the power of the spoken word and congregational repetition that both engenders solidarity and creates faith. Speaking in tongues ‘which approximates to Jazz’, as opposed to classical music, is an important verbal expression that transcends the normal limitations of language. Pentecostals have firm beliefs in demons and in a future heaven, the former providing an explanation for the injustices of the world and the latter offering an ultimate way out of present suffering. Significantly however, it should be noted that far from withdrawing from the world, South American Pentecostals have become increasingly active in the political arena.

Shaull picks up on this activism in his second section. He perceives a new paradigm of salvation emerging in Pentecostalism. The human problem, traditionally sin, is now seen in terms of impotence in a world dominated by demonic forces. The solution, traditionally the free gift of forgiveness, is now beginning to be seen in terms of the renewing power of the Holy Spirit to work healing, miracles and prosperity. The human response, traditionally the offering of one’s life in service, is now seen in terms of appropriating God’s power to take possession of what has been lost. This, as Shaull sees it, is much more empowering and appealing to the marginalised poor than a message which simply tells them they are condemned sinners who need forgiveness. For Shaull who comes from a Reformed theological tradition and can never remember having heard a sermon on the gifts of the Spirit, this is the one great thing about Pentecostalism. It demonstrates that the Christian faith has the power to transform people’s lives.

This is an interesting and significant book and will be of particular interest to Reformed and Conservative evangelicals who want to read a fair-minded thoughtful book by two scholars who remain in their own tradition.