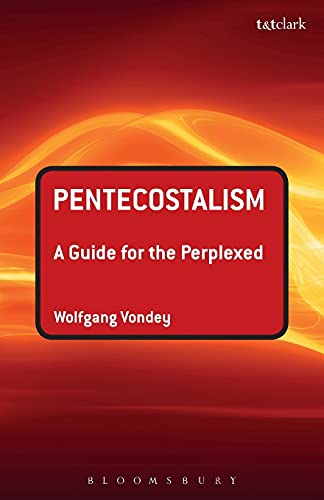 Pentecostalism: A Guide for the Perplexed

Wolfgang Vondey, currently an Associate Professor of Systematic Theology and Director of the Centre for Renewal Studies at Regent University, Virginia Beach, USA, is an able guide who introduces the reader to the perplexing and often misunderstood nature of Pentecostalism. In this fine work Vondey employs a phenomenological approach to Pentecostalism with the aim of presenting the many facets of Pentecostalism rather than simply “reducing the movement to one of its elements or distorting the image with a homogenous account that does not reflect the movement’s perplexing reality of often conflicting beliefs and practices” (p. 2). In pursuing this goal Vondey explores seven key tensions and themes that characterise Pentecostalism, corresponding to the seven chapters of the book. These different discords within Pentecostalism, as well as possible resolutions, are underscored in each chapter by Vondey’s dialectical structure where in Hegelian like fashion he first presents a Pentecostal thesis, follows this with a Pentecostal antithesis, and offers his own Pentecostal synthesis.

In the first chapter Vondey portrays Pentecostalism as both a “local” and “global” movement, where neither aspect can be ignored. Thus, suggests Vondey, Pentecostalism should be seen as a “glocal phenomenon” which acknowledges the interdependence “between the local and the global” (p. 25). He moves on to juxtaposing in chapter two “holistic spirituality” and “charismatic extremism” perceivable in this ‘glocal movement’, a conflict Vondey seeks to resolve through the “Pentecostal imagination”, which captures “pneumatic activity [experience], pneumatological reflection [discernment], and charismatic practice [praxis]” (p. 44). The third chapter explores both the ecumenical roots, as well as the sectarian attitudes, within Pentecostalism. The synthesis stated here is one of generous acknowledgement of the “unity and diversity” in the movement, which, nevertheless, according to Vondey, can happen only if a more robust Pentecostal ecclesiology is developed. In the fourth chapter the discussion focuses on the doctrine of God with a particular emphasis on the disagreement between Trinitarian and Oneness Pentecostals. To mediate between these opposing doctrinal views, Vondey looks at how theological beliefs have been, and seem to be, formed in Pentecostalism and the extent to which this might illuminate the future dialogue. Chapter five marks the history of social engagement among Pentecostals vis-à-vis the triumphalism of “health and wealth” advocated by others. Vondey remarks here that these differing social attitudes are “highly dependent on the contextual history and development of social, economic, and political circumstances” (p. 108), and therefore it is likely that no one social consciousness will emerge among Pentecostals. The penultimate chapter examines the “egalitarian impulse of Pentecostalism”, based on the Holy Spirit being poured out on all flesh, and the practical reality of “institutionalism in the Pentecostal movement”, which has commonly been authoritarian, racist, and sexist. Vondey concludes that in the light of these contradicting sentiments Pentecostalism should be seen “as an egalitarian movement-in-development” (p. 125). The final chapter describes the “anti-intellectualism in classical Pentecostalism” in contention with “the rise of Pentecostal scholarship”, before Vondey articulates the future of Pentecostal studies as being “Renewal scholarship”.

Vondey finishes his discussion with an epilogue, rather than a conclusion, because he believes that “Pentecostalism has just started” (p. 155) and consequently to end with the latter would be premature. Having said that, in his epilogue Vondey does offer his concluding comments by noting that Pentecostalism is best seen as a “Renewal movement . . . with a constant tendency to go beyond itself” (p. 156); a disposition that contributes to its many inner tensions. Moreover, he reinforces another of his central convictions, presented in the book, that Pentecostalism should not simply be seen as a fringe religious phenomenon but as a global movement impacting the very nature of contemporary Christianity. Hence, claims Vondey, in understanding Pentecostalism one understands “the changing face of the Christian world” (p. 3, see also p. 157).

Vondey’s insightful work is a welcome addition to the increasing array of introductory books on Pentecostalism. Three particular strengths can be identified. Firstly, Vondey adopts a thematic and a theological approach, which means that this book helpfully supplements the more historical approaches to Pentecostalism (e.g., Hollenweger, Pentecostalism: Origins and Developments Worldwide [1997], Anderson, An Introduction to Pentecostalism [2004] and Kay, Pentecostalism: A Very Short Introduction [2011]). Secondly, Vondey provides a generous yet critical, and broad yet specific reading of Pentecostalism, leading to a nuanced description of this “glocal” movement. Thirdly, as well as providing a theological and a balanced analysis of the Pentecostal phenomenon, Vondey also makes his own contributions to these various Pentecostal tensions, displaying his acumen as a constructive theologian.

Having said that, in summary, Vondey’s Pentecostalism: A Guide for the Perplexed is a commendable resource on Pentecostalism and particularly valuable to those, students and scholars alike, seeking a nuanced thematic and theological overview of this global movement.