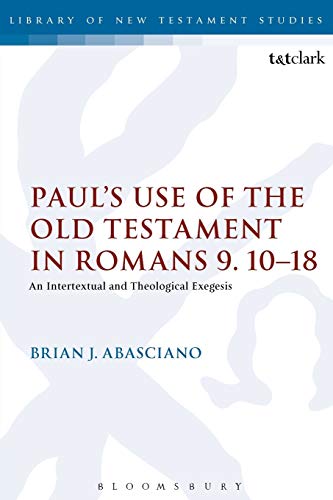 Brian Abasciano has already published a study of Rom 9:1–9 and plans to publish a concluding volume on 9:19–33. Hence, this work on Rom 9:10–18 is the second part of a three-volume work. This book consists of an intense analysis of Rom 9:10–18 informed by an intertextual exegesis of OT texts that Paul uses in these verses. When Abasciano speaks of intertextuality, he has in mind the historical and grammatical meaning of the OT texts in their historical contexts. He then proceeds to investigate the reuse of these texts in Romans. Much of the book, then, consists in studying the OT texts in their original context. For instance, chapter 2 considers Gen 25:23, chapter 3 Mal 1:2–3, and chapter 4 the use of Gen 25:23 and Mal 1:2–3 in later Jewish literature. Similarly, chapter 6 examines Exod 9:16 and the hardening of Pharaoh’s heart, and chapter 7 the appropriation of Exod 33:19b and 9:16 in later Jewish traditions. Abasciano has two chapters on the exegesis of Rom 9 itself: chapter 5 on Rom 9:10–13 and chapter 8 on Rom 9:14–18. The two chapters that interpret Romans are informed by the examination of the OT and the interpretive traditions in subsequent Jewish literature. The book is framed by an introduction and conclusion.

Abasciano argues that Paul’s reuse of the OT accords with the original historical context and meaning of the OT texts, maintaining that the OT played a formative influence in Paul’s thinking. He also concludes that there is some support for the New Perspective in a close reading of Rom 9:10–18, but at the same time he also finds support for the traditional notion that Paul inveighs against works-righteousness, and thus he defends the notion that some Jews fell into legalism, even if such legalism was contrary to their theology. Abasciano says that God’s covenant promises and election are due to God’s sovereign call and not by works or ancestry. Still, God’s election is ultimately conditional and based on faith.

The argument is tightly constructed and well-done, consisting of careful exegesis of the text in conversation with other scholars. A short review cannot trace out the details of the argument, so the review will set forth some of the main conclusions Abasciano advances. The election of Jacob instead of Esau in Gen 25 has individuals in view but is primarily corporate, and hence it applies especially to the peoples of Israel and Edom. God didn’t choose Jacob and reject Esau based on their works or lack thereof, but Esau’s rejection of the birthright and Jacob’s treasuring of it “is a sort of justification for God’s choice” (p. 13). In the same way, the election of Jacob instead of Esau in Mal 1:2–3 is also fundamentally corporate. Individual Edomites could choose to join Israel and be saved, and hence unconditional election isn’t taught here.

In Rom 9:6–13 Paul teaches that the promise doesn’t belong to those who are merely ethnic descendants of Abraham but to those who have faith in Christ. Paul also defends God’s right to name those who have faith in Christ as the children of Abraham instead of those who were ethnically Jewish and observed the law. “God has sovereignly determined that faith in Christ is the basis for participation in the covenant and that unbelief is the basis for exclusion from the covenant” (p. 53), and this means that “faith” is “a condition of election on some level” (p. 53). Even though Rom 9:6–18 does not mention faith, Abasciano thinks faith is implicit in these verses since justification is clearly by faith in Paul. Furthermore, God’s calling isn’t efficacious but refers to God’s “effectual naming/declaration based on faith” (p. 54). “So Paul’s calling language strongly supports faith as the assumed basis of election in 9.12” (p. 55).

Abasciano also argues that election is primarily corporate in Rom 9:10–13: “the locus of election was the covenant community,” and “individuals found their election through membership in the elect people” (p. 59). Individuals are elect as a result of their membership in the elect people and their corporate representative. Such a view fits with the OT where election is primarily corporate and operates in a similar way. Individuals enjoy the benefits of election by faith, and thus one could be a corporate member of Esau but choose to identify with Israel and be saved, and Jews who refuse to believe cut themselves off from the covenant people (p. 67). One of the surprising elements of Paul’s argument is that Israel has now become like Esau and the Gentiles like Israel.

When it comes to the hardening of Pharaoh’s heart, Abasciano maintains that Exod 2:23–25 demonstrates that the hardening is conditioned upon his sin against Israel. God didn’t actually cause Pharaoh to refuse the divine demand to let Israel go. The hardening means that God strengthened Pharaoh’s will to carry out what he already desired to do. Psalm 105:25 seems to indicate that God directly hardened the Egyptians, but Egypt was hardened against Israel when they saw that God blessed the latter (Ps 105:24). The hardening of Pharaoh was contingent upon signs, and thus the Lord hardened Pharaoh at the first miraculous sign in Exod 7:13, showing that the hardening was conditioned upon Pharaoh’s past and continued oppression of Israel. In other words, the hardening wasn’t irresistible, and Pharaoh could have chosen otherwise.

According to Abasciano, Paul responds in Rom 9:14–18 to those who question whether it is just for God to choose people apart from works or ancestry since such a state of affairs seems to fly in the face of his choice of Israel. God’s claim that he would have mercy on whomever he wishes (Exod 33:19 cited in Rom 9:15) isn’t unconditional, for we see from Exod 34:6–7 that God grants mercy to those who love and obey him and rejects those who hate him and abandon their covenant relationship with him. God shows mercy, according to Exod 33:19, to those who repent of their sin. God is not unrighteous, “for choosing his people based on faith in Christ” (p. 181), for he can set whatever conditions he chooses for dispensing mercy and isn’t obligated to choose them based on works or ancestry. The willing and running in Rom 9:16 refer to the desire and effort to keep the law. Hence, “neither human resolve to keep the Law nor works in actual wholehearted and vigorous keeping of the Law can command God’s mercy” (p. 193). Israel is hardened because God made election contingent upon faith in Christ instead of works and ancestry (p. 209). Hence, divine hardening is reversible, for those who are hardened can still turn to the Lord and be saved. This seems to fit with Rom 11, where Paul tries to win over hardened Jews so that they are saved, and thus the hardening, like election, must be conditional.

In a short review I can scarcely interact with the details of Abasciano’s argument. His attention to the OT context in Rom 9–11 is helpful, and there are many excellent exegetical insights as he explores the various texts. The later Jewish traditions don’t play a major role in the thesis, but it is instructive to see how other writers appropriated and understood the texts cited here.

Those from an Arminian tradition are more likely to be convinced by Abasciano than those from a Reformed background, though he makes a vigorous case for his view. Detailed discussion is needed to arbitrate these matters, but space is lacking for such here, and thus a few abbreviated comments without a fuller explanation must suffice for this review.

First, calling in Paul isn’t merely an effectual naming based on faith, but is an effective action that creates faith (Rom 8:30). Faith is a consequence of calling, not a presupposition for it (cf. 1 Cor 1:23–31).

Second, it seems unlikely that the Roman Christians would question God’s justice/righteousness/fairness if Paul’s argument in 9:10–13 is that God elects based on faith instead of works or ancestry. Unbelieving Jews may have thought their works could commend them to God (Rom 2:1–29; 3:9–20; 9:30–10:4), but we have no evidence that believers thought God was unrighteous for justifying his own by faith. On the other hand, if Paul teaches unconditional election, we immediately understand why the question of God’s justice or fairness arises. In addition, Rom 9:16 speaks of the human will and effort in general terms. Paul studiously avoids any reference to “works of law” in Rom 9. Thus in Rom 9:30–10:4 he speaks of “works” in general, and nary a word is said about circumcision, food laws, or Sabbath.

Third, Abasciano rightly says that justification is by faith and that faith is necessary for right standing with God. Still, he wrongly smuggles faith into the equation in Rom 9:6–18 because Paul intentionally leaves faith out in his exposition, for he digs deeper and locates the foundation of faith: God’s unconditional sovereign choice. Paul intentionally contrasts works and calling in Rom 9:12 instead of works and faith. What the text actually says and doesn’t say must be heeded.

Fourth, Abasciano doesn’t distinguish between corporate election in the NT from corporate election in the OT. The discussion ties into one’s understanding of the differences and similarities between Israel in the OT and the church in the NT. Suffice it to say that untangling these differences and similarities would produce clarity, for election in Israel isn’t necessarily tied to salvation in the OT, but it is tied to salvation in the NT. In the latter instance, all those who are elect will also be preserved until the last day. Abasciano’s understanding of corporate and individual election suffers from ambiguity, but that discussion would take too much time to pursue here.

Fifth, the point of Exod 33:19 in its historical context is that all of Israel deserves to be destroyed because of their sin in making and worshiping the golden calf. The sparing of any is due to God’s mercy, and thus the text fits nicely with the notion of unconditional election. God elects some for salvation even though they deserve judgment because of their sin. Exodus 34:5–7 doesn’t convey the basis for God’s election of Israel but describes the condition for remaining in the covenant.

Sixth, Abasciano’s understanding of the hardening of Pharaoh has merits and demerits. It seems we do have an example of judicial hardening here, but at the same time Abasciano minimizes the divine role in Pharaoh’s hardening. Nor is it clear that hardening is reversible, so that some of those hardened are ultimately saved.

Vigorous and friendly discussions on Rom 9:10–18 are important since our goal is to understand God’s word. We can be thankful for Abasciano’s commitment to the Scriptures, for his careful exegesis, and for a fine defense of the Arminian reading. The debate will continue, and those of us who are Reformed can be thankful for interlocutors like Abasciano who take the biblical text seriously.