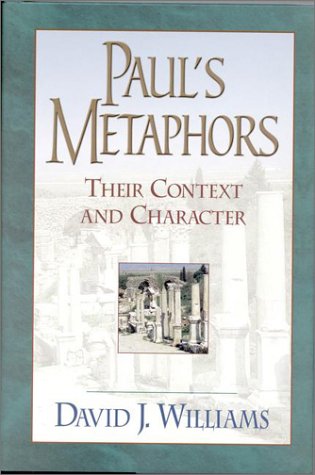 Paul’s Metaphors Their Context and Character

One’s first response to reading the title of this book is two-fold: on the one hand, finally! On the other: is this not too much for a single volume? The author himself says that ‘this is a book about metaphors’. There is a real need for such a study in Pauline scholarship because Paul, in his letters, used and/or created many metaphors. Interpretations of individual metaphors lead to particular understandings of the lines of argument to which they belong.

Williams organises the great number of metaphors which he identifies in Paul’s letters in twelve sections: Life in the City; Life in the Country; Family Life; Providing for Physical Needs; Slavery and Freedom; Citizens and Courts of Law; Manufacturing and Marketing; The Business World; Travel; Warfare and Soldiering; Cultic Observances; Public Shows; and Sporting Events. This classification is intended to reflect the domains from which most of Paul’s metaphors are taken. The author also adds two appendices—A Select Chronology of the Roman Empire and Ancient Authors and Texts. These provide succinct information about the life and writings of particular ancient authors discussed or alluded to in the book.

The discussion of each metaphor is short. The domain is described and the relevant texts are briefly discussed. The end-notes of each section provide basic information concerning the Greek meanings of words and bibliographical references for further reading (including other ancient texts relevant to the metaphor under discussion). A detailed outline helps readers find their way.

Williams does not enter the detailed debates about how metaphors work, he only affirms his presuppositions. He works with the Aristotelian definition of metaphor (‘the application of an alien by transfer’, Poetics, 21.7) and considers that a metaphor is an aid toward the perception of a truth. Also, he does not explain his selection criteria, i.e. why a particular expression/word is being analysed or not. He mentions only that the distinction is ‘difficult’ to make. His description of the background/ environment is accurate and informed, but he does not offer comprehensive surveys of available alternatives for any given metaphor. Also he does not do much to help the reader to follow and evaluate the reasoning behind his exegetical decisions.

In sum, being accessible to the general reader and horizon-opening for the student of the Bible, this book is at once pioneering (at least in Pauline studies) and introductory, thus inviting further more detailed study. It should become an important resource for the backgrounds of Paul’s metaphors.