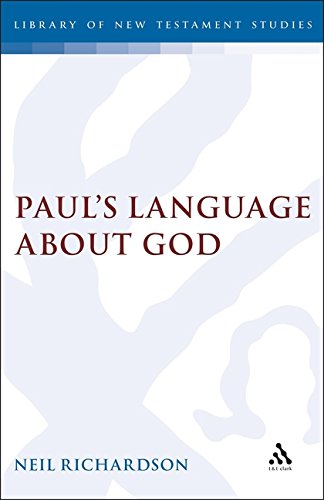 One major weakness of much current NT study concerns its frequent isolation from historical and systematic theology. Where interdisciplinary studies occur, writers are more likely to look to literary theory, classical rhetoric or the social sciences than to issues which arise from the posthistory and reception of the text. Dr Neil Richardson never allows later questions to distort his exegesis, but in this superb study he addresses issues in Paul which are fundamental for late 20th-century theology, with its renewed concerns about trinitarian questions. The fundamental thesis of this excellent piece of research is that on grounds of exegesis of the Pauline writings, ‘language about God and his language about Christ are best studied together’ (p. 24,-‘italics). Paul yields an ‘intertwining’ of God-language and Christ-language; they are ‘thoroughly interdependent’ (p. 311). Notably grace, power, love and glory are attributed both to God and to Christ.

Dr Richardson begins by noting that, in effect, only H. Moxnes (1980), J.M. Bassler (1982) and L.J. Kreitzer (1987) have given due prominence to Paul’s theocentric thought and its interaction with the central place also of Christology. In terms of method, he rejects a ‘titles’ approach to Christology, rightly arguing that tire context and function of Paul’s language about God and Christ offer a more fruitful path into each of these two theological areas. His major examples of linguistic usage come from Romans 9–11, 1 Corinthians 1:18–3:23; 2 Corinthians 3:14–4:6; and Romans 12:1–15:7. The 1 Corinthians passage contains ‘perhaps the most startling example of the “intertwining” of God- and Christ-language in Paul’s writings’ (p. 23).

In the central section of Romans 9–11 (10:1–13) we see the effects of this ‘interplay’ on Paul’s whole argument. In 1 Corinthians, God-language appears in significant ‘clusters’. Perhaps the ‘Christ-party’ regarded Christ as a cult-figure rather than as the eikón of God. It is through Christ and the cross that the power of God is defined and experienced, through a dialectic of power and weakness, wisdom and foolishness (p. 123). ‘Paul defines God by reference to Christ’ (p. 271), yet the term ‘Father’ remains central, especially in contexts of doxology. Each mode or context of language defines the other.

This volume is warmly commended as a work of well-read, thorough scholarship which addresses genuinely important theological issues. It should encourage PhD candidates who fear that only some marginal area or work in the history of research can any longer make a constructive contribution in NT studies, since the book constitutes ‘an abridged and lightly revised version of a dissertation presented to Bristol University in 1992’. Just as Professor F.F. Bruce drew much pleasure from completing Dr Seyoon Kim’s supervision in his last year at Manchester, so Dr John Ziesler, I imagine, as Dr Richardson’s supervisor, will be pleased that a work of this stature marks the completion of his own senior appointment at Bristol. This is an excellent and useful volume.