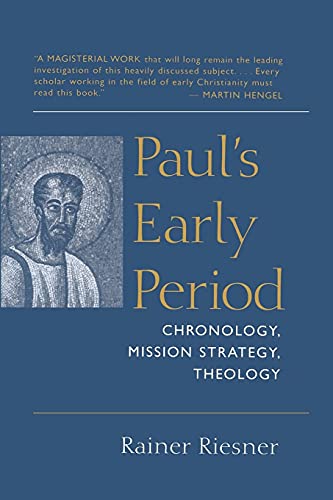 The work published through an admirable translation was originally the author’s Habilitionschrift submitted to Tübingen University in 1991 and published in Tübingen in 1994.

In the Introduction, a survey of the history of research reveals how the various attempts undertaken during the last 20 years to reconstruct Pauline chronology solely from Paul’s letters with complete disregard of the framework of Acts have resulted only in confusion. This state of affairs leads Riesner to take up the methodology of giving Paul’s letter a ‘relative’ (rather than ‘absolute’ priority over the data in Acts). Then Riesner lays out his book in three parts.

In Part I ‘Early Pauline Chronology From Jerusalem to Achaia’, Riesner ‘attempts to determine absolute or relative dates for [Paul’s] activity by relating information from Paul’s letters and Acts to extra-testamental evidence’. Jesus began his ministry in the apocalyptically significant sabbatical year AD 27/28 and was crucified in AD 30. Paul was converted in AD 31/32. Having dealt with the important events in Paul’s career and the development in various stages of the early church’s mission to the gentiles, Riesner discusses in detail Claudius’ Roman edict concerning the Jews (AD 49), Paul’s encounter with Gallio (AD 51), his ministry in Ephesus (AD 52–55), his final journey to Jerusalem, his appearance and trial, and his transport to Rome (AD 57–60).

In Part II ‘Stages in Pauline Missionary Strategy’, Riesner establishes a ‘correlation between the chronological data thus gained, the stages of Paul’s ministry that become visible in his letters, and the framework of Acts’. Here he is particularly interested in inquiring a specific geographical sequence of Paul’s mission.

From Galatians 1:15–17 Riesner ascertains that Paul understood his conversion/call in terms of the call of Deutero-Isaianic Servant of Yahweh that expresses a hope for the gentile world the most clearly in the OT. Yet Riesner thinks that the realisation of his call to the gentile mission occurred to him later through another revelation (Acts 22:17–21) which took place during his first conversion visit to Jerusalem (Gal. 1:18/Acts 9:26 ff).

From Paul’s report that he has accomplished ‘from Jerusalem to the boundary of Illyricum’, his projection of a mission to Rome and on to Spain, and the other descriptions of his gentile mission in Romans 15:16–28, Riesner develops the hypothesis that Paul read Isaiah 66:18–21 as being fulfilled in his mission and so accordingly he chose his geographical route in consideration of the list of the places in Isaiah 66:19.

Then Riesner follows through Paul’s itinerary from Syro-Cilicia, Antioch, Cyprus, Galatia, Asia Minor, Macedonia and Achaia, Ephesus, Corinth etc. according to Acts’ framework correlating with the relevant data from Paul’s letters and commenting on Paul’s circumstances and strategic intentions. In this process Riesner affirms the South Galatian theory for the destination of Galatians. Paul’s separation from Barnabas after the Apostolic Council led Paul to pursue his own missionary strategy according to Isaiah 66 more freely. From Thessalonica Paul probably wanted to travel to Rome. But the news of Claudius’ ban of the Jews persuaded him to turn south to Athens and Corinth instead. With the death of Claudius in October 54, the way to Rome was opened up at the end of his ministry in Ephesus. So Paul attempted to go to Rome and Spain, but only after taking care of the troubles in Corinth and completing the collection from the churches in Macedonia and Achaia and delivering it to Jerusalem. In accordance with Isaiah 66:19 Paul regarded Spain as the ‘boundaries of the world’ and as the conclusion of his own commission before the parousia of the Lord.

The direct information from Paul’s letters and Acts and the inferred information from his geographical movements lead Riesner to a chronological synthesis. It confirms that ‘the overall framework of the sequence of events portrayed in Acts is chronologically possible and coherent’, having real problems only with two details: the census of Qurinius (Luke 2:1 f) and the uprising of Theudas (Acts 5:36).

Finally, Part III ‘Early Pauline Theology: The First Letter to the Thessalonians’, Riesner deals with Paul’s mission to Thessalonica and analyses Paul’s theology reflected in Thessalonians. Luke’s account of Paul’s founding mission in Thessalonica (Acts 17) harmonises well with the data obtained from 1 Thessalonians and the other Pauline letters. In 1 Thessaloninas 1–3 Paul is not delivering just a moral paraenesis in the manner of a Hellenistic moral philosopher or Cynic orator. Rather, he is defending himself against the accusations of deception, greed, trickery etc as well as the possible criticism of his abrupt desertion of the Thessalonian Christians. The defence was necessary because in order to extract from the Christian fellowship their relatives and friends, the pagan Thessalonians denounced Paul as one of the wandering, charlatan preachers with those bad traits in the Hellenistic cities.

Having briefly surveyed the main teachings of Thessalonians, Riesner counters the influential view based on the absence of the doctrine of justification in Thessalonians namely, that the doctrine developed late during Paul’s third missionary journey. Riesner maintains its origin from Paul’s conversion experience and the chronological priority of Galatians to Thessalonians. Pointing to the many hints in Thessalonians of the readers’ previous knowledge and to the various elements in Thessalonians that imply the doctrine or substantively agree with it, Riesner argues that Paul preached in Thessalonica the same gospel as in Galatia and Corinth. But the doctrine is not expounded in Thessalonians because ‘in his hasty response, the apostle concentrated on what was immediately necessary’. This conclusion leads Riesner to deny that 1 Thessalonians represents an early form of Paul’s theology, a theology which Paul supposedly shared with the Hellenistic Jewish church in Antioch before developing the specific ‘Paulinism’ in connection with various controversies.

In the ‘Summary: Chronology and Theology’ Riesner’s final conclusion is

Although chronology was indeed one important factor in the development of Pauline theology, it cannot bear the burden of demonstrating radical, fundamental transformation.

This bare summary of Riesner’s work hardly does justice to the wealth of information and insights contained in the work. Riesner’s treatment of the various aspects of Pauline chronology is most comprehensive, his examination of the ancient Jewish, Greek, Roman and Christian source most impressive, and his discussion with modern authors almost exhaustive, so that the work as a whole is a model of thoroughness. Riesner displays a probing, critical and independent mind which is not easily satisfied with the answers already provided nor easily intimidated by the fashion of the day to abandon a traditional view that proves to be well founded. Throughout Riesner’s arguments are well substantiated and clearly presented. With all these qualities Riesner has provided us with, on the whole, a reliable chronology of Paul. His convincing rehabilitation of the framework and the chronological/geographical details of Acts is also an important contribution.

Riesner’s suggestion that in his missionary strategy Paul used Isaiah 66:18–21 as his guide, as well as the Deutero-Isaianic Servant passages has opened up a new vista. This suggestion, together with J.M. Scott’s emphasis on the list of the nations in Genesis 10 for a similar view (Paul and the Nations, 1995), will stimulate further research into the OT background of Paul’s missionary strategy.

However, inevitably one may query Riesner’s conclusion on some details. It appears somewhat incongruous, e.g. that having designated Paul’s interpretation of his Damascus call in terms of the Servant of Yahweh as ‘a matter of decisive significance’ and having conjectured Christ’s appearance in ‘Damascus’ as having led Paul to his interpretation of his call in terms of the gentile mission, Riesner goes on to say that until the new vision in Jerusalem Paul was not conscious of his call to the gentile mission and that ‘Paul lived in “Arabia” somewhat reclusively’ (cf. my article in NTS, 43 [1997], 426–29).

Since many critics point to the primitive character of eschatology and the absence of the doctrine of justification in 1 Thessalonians as evidence for their theories of radical developments in Paul’s later theology, Riesner’s detailed examination of 1 Thessalonians is understandable. However, since Riesner regards Galatians as prior to 1 Thessalonians, is it not required of him also to discuss the theology of Galatians with Paul’s work in Antioch and southern Galatia for a comprehensive picture of his theology during his ‘early period’? At any rate, it is regrettable that Riesner leaves such an important matter as the dating of Galatians undecided between AD 48 (before the Jerusalem council) and AD 50 (after the Jerusalem council).

However, these are just minor points that in no real way diminish the value of Riesner’s great work. It will serve as the most reliable chronological guide for Pauline scholarship for a long time to come.