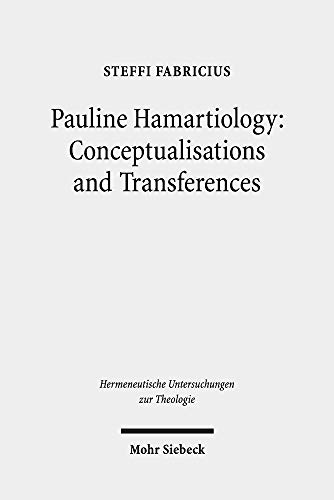 This book is an edited form of Fabricius’s doctoral dissertation, using the tools of cognitive linguistics to address Paul’s understanding of sin. Is sin an action, or a slave master? As Paul speaks in both of these ways, which is real and which is metaphor? Or is it possible to speak of both as real, and if so, how do they relate?

Fabricius is not writing as a biblical scholar who reaches into the foreign field of cognitive linguistics, but as someone with expertise in linguistics (according to her bio), and is using that expertise to contribute to a long-contested debate in biblical scholarship. Her proficiency in cognitive linguistics is a strength, but her methodology, scholarly jargon, and the thought-world in which she operates will be foreign to most biblical students and scholars. Readers will need pre-requisite knowledge in the distinctions between reality and actuality, the ontic and the ontological, rerum metaphora and verborum metaphora, etc. Such concepts are used liberally throughout her work, generally without explanation or definition. This heavy use of the jargon of her own field is entirely appropriate for a PhD thesis, but the typical Themelios reader may be unfamiliar with such concepts and ought to be forewarned: This is not a light read, even by the standards of published PhDs.

On the other hand, Fabricius has very helpfully written in English, making her work far more accessible than if she had taken the easier route of writing in her native German. Even if there are occasional grammatical complexities in her writing, this decision should greatly increase the reach of her work.

After a short introduction, chapter 2 introduces the problem that scholars in the field of biblical studies have wrestled with: Is sin in Paul primarily or exclusively an action or a personified power? How do we reconcile these two ways of speaking?

Chapter 3 introduces cognitive linguistics, and Fabricius’s approach of producing “conceptual metaphorical mappings and conceptual integration” (p. 78). That is, she seeks to understand how ideas fitted together in Paul’s mind, and therefore describe a unified concept. This concept is strictly in Paul’s mind (deduced from his writing), but since all humans encounter the world in a common “embodiment,” we expect that people will have sufficiently common mental concepts, and can therefore understand each other.

Chapter 4 deals with an assumption associated with a “linguistic understanding of ontology”: that God “does not have objective existence, is beyond human perception, and must, therefore, also be beyond human knowledge” (p. 82). Fabricius is alert to the way this foundational assumption of much cognitive linguistics could undermine her whole project, but denies that this assumption is necessary. By rejecting Aristotelian substance ontology, and introducing a relational ontology that is dependent on language (metaphorical ontology), she responds to those who claim that theological language is indirect and God is therefore unknowable: all language is indirect, so God is just as knowable as anyone or anything else.

Chapter 5 is the main body of Fabricius’s research, constituting half of the book, as she methodically relates Pauline “sin” to fundamental cognitive linguistics categories such as “container,” “event,” and “state.”

In chapter 6, Fabricius concludes that not only sin, but all things have a metaphorical ontology. This goes beyond a simple relational ontology by arguing that our existence is not constituted by static relationships, but by the constant movement or communication (translatio) between relational entities.

While I can see some merit in this conclusion, it is built upon her philosophical foundations and prior understanding of ontology (primarily expounded in ch. 4), rather than the results of her study of Paul per se (ch. 5), which are largely absent from her conclusions. She has read out of her study what she put into it. That does not invalidate her conclusions, but their basis is theoretical, not exegetical.

Fabricius’s efforts to bring a new framework to a long running debate ought to be applauded. If simple exegetical approaches were sufficient, the debate would have faded long ago, so attempts to reshape our thinking to bring it into conformity with God’s word are both welcome and necessary. Whether Fabricius’s particular attempt will win widespread support remains to be seen, but I fear the impact of this book will be limited by the foreignness of its concepts to the typical biblical student.