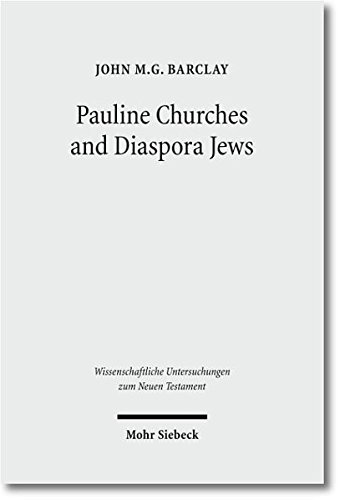 Pauline Churches and Diaspora Jews draws together some nineteen essays penned by John Barclay over the last twenty years. The essays, while diverse in terms of subject matter and method, revolve around a common scope: what can be learned from comparing Pauline churches with Diaspora Jews? One of the central questions Barclay seeks to unearth is how Pauline churches constructed their new “Christian” identity. Each essay, therefore, attempts “to investigate the social formation of identity in the Pauline stream of early Christianity” (p. 8) using Diaspora Judaism as the analogic point of comparison.

After an introductory chapter that situates the essays within the history of scholarship and introduces the major themes, the book is divided into three further sections. Section II, “Pauline Churches and Diaspora Jews,” contains seven essays (chs. 2-8) that reflect on the social features of the Pauline churches in comparison with Diaspora synagogues. Thus, chapter two examines the social significance of Rom 14:1-15:6 and argues that while Paul safeguards the practice of Torah observance among the Roman Christians, his command to welcome non-Torah observing Christians into the assembly ” effectively undermines the social and cultural integrity of the Law-observant Christians in Rome” (p. 56, italics from original chapter heading). Hence, “Paul's instructions . . . created tensions which were likely to grow to the point when a difficult social choice would have to be made between the Jewish and Christian community” (p. 58). Chapter three argues that whereas Philo insists upon the literal observance of circumcision for Jews, Paul innovatively gives priority to the metaphorical sense of circumcision and expands “its field of reference to include heart-circumcised Gentiles” (p. 76). Chapter four claims that whereas Josephus praises the Torah for its ability to produce harmony in every area of life of the Jews, Paul's articulation of his ethics in 1 Corinthians is more under-determined as he seeks to make space for diverse cultural expressions of a common faith. Chapters six and seven apply deviance theory to the question of apostasy in Judaism and Christianity. Barclay argues that the label of apostasy is negotiable and a matter of one's perspective. Whereas the Maccabean literature constructs a strict definition of social integration with “Hellenism” as apostasy, other texts celebrate Jewish social integration without supposing Jewish identity to be compromised. The case of Paul is striking in that he was often denounced by fellow Jews as an apostate, but other “Jewish Christians . . . accepted Paul's stance as compatible with their understanding of Judaism” (p. 135).

Section III, “The Invention of Christian Identity in the Pauline Tradition” (chs. 9-13), explores Paul's “strenuous efforts to construct, define and secure the identity of believers, which was often in practice unclear, undetermined or fragile” (pp. 23-24). For example, the surprising divergence between the churches in Thessalonica and Corinth is due, in part, to their distinctly different social interaction with outsiders. Whereas the Thessalonians' experience of social alienation and conflict with outsiders reinforces the validity of Paul's apocalyptic message, the Corinthians' integration with the world pushes Paul to reinforce the apocalyptic dualism between “this world” and “the present age” and forces him to construct boundaries between the Corinthian assembly and the outside world. In another example, Barclay argues that in 1 Thess 4, Paul “Christianizes Death” by “tying Christian hopes for the dead so tightly to the core beliefs of the Christian confession” (p. 234). And in the Colossians household code Paul invents a “comprehensive life-hermeneutic” (p. 254) that calls upon the church to serve the Lord in every imaginable role, occupation, and deed.

Section IV, “Josephus, Paul and Rome,” contains four essays (chs. 14-17) that explore Josephus' rhetorical techniques in Contra Apionem. Barclay turns to postcolonial theory to illuminate Josephus' slippery discourse that shifts “equivocally from apparent complicity to subtle subversion, and back again from apparent resistance to subtle implication in the structures of the system it seems to subvert” (pp. 30-31). For example, Josephus portrays Jewish martyrs as “tougher than the toughest Spartan ideal” (p. 329) and as exemplars of the Roman “contempt of death in the face of the Romans themselves” (p. 328). Chapters 18 and 19 note that while Paul writes within the context of Roman religion, he never differentiates one cult or deity from another. Despite the prevalence of the Roman imperial cult, not once does Paul refer to it directly. For Paul, Caesar and Rome are simply entities within the larger apocalyptic battle between flesh/sin and Spirit. Paul does not make Rome the focus of his critique precisely because all worship not directed to God in Christ is idolatrous. In Barclay's words, “At the deepest level Paul undermines Augustus and his successors not by confronting them on their own terms, but by reducing them to bit-part players in a drama scripted by the cross and resurrection of Jesus” (pp. 386-87).

John Barclay is one of the premier NT scholars of our generation, and this compilation of his essays in one monograph makes an excellent scholarly contribution. The comparison of Pauline churches with Diaspora Jews sheds light on numerous aspects of the creation of Christian identity, the construction of boundaries between the Pauline churches and the outside world, and the reasons for the separation between the church and the synagogue. Though he probably underestimates the role and influence of Augustan religious and political ideology on Paul and his churches, his essays on Paul and the imperial cult should, further, require sustained analysis from the recent cottage industry of counter-imperial readings of Paul.