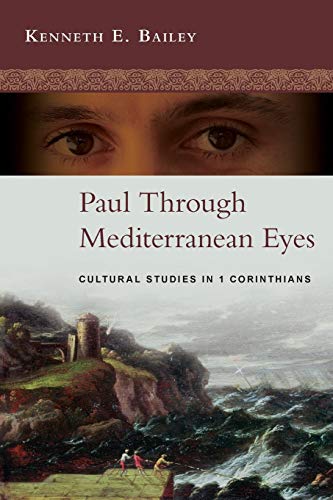 First Corinthians is a notoriously difficult book that was written to answer obscure questions relating to a troubled church with unique issues. Or was it? In this long-anticipated work, Kenneth Bailey challenges such traditional assumptions, arguing instead that the book presents a coherent and carefully structured work written for all believers. Having a rich background of over forty years living and teaching in the Middle East, Bailey brings a fresh and remarkably unique approach to 1 Corinthians that will challenge many established works. That Bailey's approach is distinct can be seen in his own admission:

The New Testament can be likened to a vast ocean. There are two well-known ways to sail upon it. One is to set the sails to the prevailing winds and currents and to use great caution in any deviation from them. The other is to move through unchartered waters, explore neglected islands and inlets and then return and attempt a faithful report on the journey. I have chosen the second. (p. 31)

So what is distinctive about Bailey's approach in assessing 1 Corinthians? In essence, the main thrust of Bailey's approach has to do with his understanding of the rhetorical features of the book. Bailey places his methodological approach on the table when he states, “the basic presupposition of this study is that Paul's Hebrew literary heritage profoundly influences Paul's rhetorical style” (p. 53). Bailey, contrary to most traditional approaches, argues that the book is not so much addressing ad hoc issues and questions of a particular church as much as it is a theologically themed argument that is both coherent and highly sophisticated. While Bailey concedes that the structure of 1 Corinthians involves a Corinthian correspondence, Bailey argues that “some of the Corinthians' questions (oral and written) are worked into Paul's outline, instead of the other way around. He sets the agenda, not the Corinthians” (p. 26). The questions of the Corinthians, while real, are incorporated to support a greater rhetorical structure that Paul drives. This style of structure, Bailey argues, reflects a Hebrew rhetorical style similar to that found in the prophetic books of the OT such as Isaiah and Amos.

To present his approach, Bailey divides 1 Corinthians into a series of small cameos that when combined form larger chiastic structures that he refers to as “ring compositions.” These “ring compositions” provide the thematic glue that unifies the Corinthian letter. In surveying the larger structure of the epistle Bailey argues that there are three motifs driving the letter: “1. The cross and the resurrection, 2. Men and women in the human family and worship, 3. Christians living among pagans: To identify or not to identify” (p. 26). While Paul through Mediterranean Eyes goes through 1 Corinthians in order, the goal of the book is not to provide commentary on every verse as much as to present these unified theological expressions that, Bailey argues, carry the book.

Bailey's approach is indeed fresh even if somewhat unusual. The strength of his work lies in the thorough analysis of rhetorical devices, contextual investigation, and historical sensitivity. Bailey accesses a wide variety of material including “twenty-three versions of 1 Corinthians . . . that were translated across 1,600 years” (p. 16). This, combined with his interaction with numerous Middle Eastern commentaries, some dating back nearly 1,000 years, makes for interesting reading. His engagement with rhetorical devices of both the Hebrew and Greek styles is insightful, compelling, and thorough. Bailey's reflections take seriously cultural expression in the ancient world and the impact that should have for a modern reading of the text.

The major strength of the book, however, is potentially the biggest stumbling book. Bailey's rhetorical analysis of 1 Corinthians is intriguing but at times feels so highly nuanced that the obvious reading of the text seems to get lost. There are times, for example, when the chiastic structures presented feel forced. His treatment of 1 Cor 7:25-41, rather than assuming that Paul is simply addressing a variety of issues relating to marital status that are loosely related, seems to flatten the differences under key headings that seek to unite the passage (see p. 221). While it smooths out the passage into coherent themes and “ring compositions,” the text itself feels far more complicated than Bailey's headings suggest.

In another situation, Bailey argues that Paul cleverly uses rhyming syllables in two consecutive cameos to consolidate his message (p. 87). He reasons that the seven syllables per line represent “well-known ancient Semitic poetic meter” (p. 88). In validating this proposition, however, he calls on only one example, which is from the fourth century A.D. This hardly establishes that Paul is using a “well-known” practice. It is upon the basis of his tenuous proposition that he then concludes, “By breaking into a Semitic poetic meter in the Greek language he strives mightily to gain the respect of both Jew and Greek and to be bring them together at the cross” (p. 88). Bailey's argumentation for a highly sophisticated use of rhetoric at this point is not convincing and leads the reader to question the validity of Bailey's overall methodological approach. While there are times where “ring progression” and rhetorical nuancing are evident (such as Bailey's helpful treatment of 1 Cor 12-14, pp. 325-418), there are other times when Bailey's approach seems to override the obvious flow of the text.

Though Paul through Mediterranean Eyes has the potential to lose some readers in the details, the book provides a fresh and distinctive approach to 1 Corinthians that many will find engaging. Bailey's unique presuppositions force the reader to reevaluate traditional assumptions. While not every reader will be convinced of Bailey's arguments, every reader will be indebted to him for drawing the attention of the reader back to the inspired text of 1 Corinthians. This is a worthwhile resource that will provide a good supplement to traditional commentaries on 1 Corinthians.