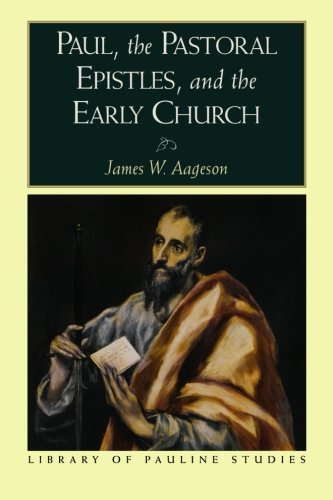 Paul, the Pastoral Epistles, and the Early Church

This book aims to see what the early church did with the memory of Paul and how this affected the image of Paul. If the Pastoral Epistles are not by Paul himself, they are an example of appropriation of Paul by later writers with a somewhat different theology from his, and then they in turn become an important part of the written legacy ascribed to Paul which influenced later writers in developing their pictures of Paul.

Aageson’s first task is to identify and compare the patterns of theology in each of the three Pastoral Epistles with one another and with the indubitable Paul. 1 Timothy is built around the concept of the household of God. 2 Timothy is more concerned with the activity of God and the resulting paraenesis. Titus is concerned more with the gospel. Comparisons are then instituted between the letters. 1 Timothy and Titus identify God as Saviour (unlike Paul), and Titus stands out from its companions by not using Kyrios for Christ. The household motif shapes 1 Timothy. The stress on godliness and fitting into the real world found in 1 Timothy and Titus is absent from 2 Timothy which expects rather trials and suffering. The letters show more agreement on truth, knowledge, and faith. There is opposition to false teachings in 1 Timothy and Titus, but in 2 Timothy the problem is more one of persecution and concomitant suffering. 2 Timothy is not concerned with the appointment of leaders and their qualities, but with the broader need for sound teaching to be passed on to the next generation.

This separation of the Pastoral Epistles from Pauline authorship sets the stage for an examination of their images of Paul. Paul is a figure of authority (apostle) and teacher who incorporates the true gospel. He is used to sanction the model of the church as a household. So begins a canonisation process which attributes authority to the Pauline writings and to the Pastoral Epistles themselves in that they are presented as if they were part of that collection. Contrast this image of Paul with that in Acts where he is not a teacher or writer of letters concerned to rebut heresy but a missionary calling others to follow his example of suffering. There is no likelihood that the author of Acts also wrote the Pastoral Epistles! Nor does the developed theology of Colossians and Ephesians figure in the Pastoral Epistles.

The second half of the book deals with the period after the Pastoral Epistles. What influence did the Pastorals as part of the Pauline corpus have on the subsequent church? Aageson argues that the Pastorals stand midway between Paul and Ignatius. Ignatius extends their christology, and his ecclesiology likewise goes beyond them in its threefold ministry. Ignatius, Polycarp, and Clement all see the Pauline era as past (whereas the Pastorals might be said to extend it), and the Pauline correspondence is well on the way to being regarded as Scripture. Thus the Apostolic Fathers continue the trends that may be traced in the Pastorals. The investigation is then extended to the later second-century theologians, especially Irenaeus and Tertullian, although specific examples of influence from the Pastorals on the thinking of these authors are not always easy to find. Finally, where the Acts of Paul (and Thecla) promote asceticism, the Pastorals advocate a godliness that conforms to the concept of the household of God and is less world-denying.

This commendably fresh approach treats the Pastorals sympathetically and notes their important role in the development of Christian theology to meet new problems. Most of what is said about their subsequent influence is compatible with theories that would place them nearer to Paul. The kind of theological and ecclesiastical developments traced in the letters could well be the kind of reactions that one might expect in Paul himself and his circle in the period towards or just after his decease. Further, Aageson is well aware that the different circumstances of each of the Pastoral Epistles may play a role in determining the theological emphases, patterns and nuances. I question whether he takes this factor sufficiently into account. A more nuanced view of what could be different aspects of essentially the same theology to deal with a different situation as compared with expressions of different theologies is required. For example, to call God ‘saviour’ may be to use a different expression, but is it really a different theology of God from that in Paul? Is the essential content of what Ephesians and Colossians call ‘forgiveness’ essentially different from what earlier letters call ‘justification’? Or again is the activity of God in ordering the functions of the different parts of the body (1 Cor 12:18, 28) any different from his role as a householder giving different tasks to his servants. Are the apostles lacking in authority whereas the overseers are authoritative figures? Certainly the images are developed in different ways, but the analysis requires to be even more sophisticated.

Aageson’s argument for the possible attribution of 2 Timothy to a separate author from 1 Timothy and Titus could be strengthened by considering the sort of differences between the letters traced in R. Fuchs, Unerwartete Unterschiede: Müssen wir unsere Ansichten über die Pastoralbriefe revidieren? (Wuppertal R. Brockhaus, 2003). But he passes over the linguistic and stylistic similarities between the three Pastorals which form the basis for considering them to be the work of a single author whose style is different from that of Paul (whether he be an amanuensis or a continuator).

This is a valuable book for its fresh questions about the theological patterns in the Pastorals and for its comparison of them with the Apostolic Fathers and other early writers, but the discussion needs to be taken further.