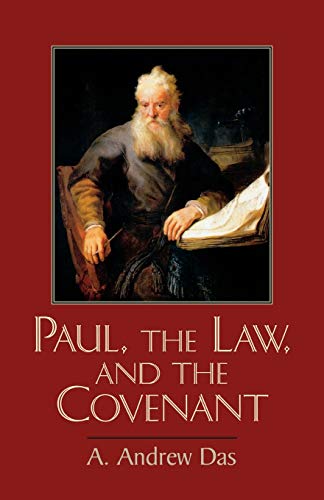 PAUL, THE LAW, AND THE COVENANT

Some books are germinal, provoking many others to formulate responses, whether in terms of development, modification or downright rejection. One thinks, for instance, of Strauss’s Life of Jesus or of Barth’s first commentary on Romans. The stir created by E.P. Sanders, when he published Paul and Palestinian Judaism in 1977, shows no sign of settling down. The ‘new perspective on Paul’, now a quarter of a century old, is still right up-to-date as a topic of lively concern to both biblical scholars and theologians.

This book is an important response to Sanders and to those influenced by him. It is based on a doctoral thesis and the prospective reader may be daunted by the mass of footnotes. It is however a model in the presentation of an important but complex subject. Its main text is very clearly written, with comparatively short sentences and lucidly presented arguments. How helpful, for instance, to find an important definition in a footnote to the very first sentence!

The traditional view is that Paul saw his doctrine of grace as the antithesis of contemporary Pharisee-dominated Judaism, in which personal salvation was tied to strict observance of the Mosaic Law. Sanders challenged this perspective, arguing for ‘covenantal nomism’, that the Jews always saw the Law within the gracious framework of God’s election and covenant with Israel, and that they did not believe salvation depended on perfect legal obedience. In fact their possession of the Law induced spiritual complacency linked to particularistic nationalism, for as James Dunn has stressed, they regarded salvation as the normal inheritance of the Jews, denying salvation to Gentiles who did not possess the Law. Many other scholars, notably N.T. Wright, have taken this general approach to Paul’s debate with Judaism. While accepting some features of this new approach, chiefly the stress on the place of grace in NT Judaism, Das argues that Sanders wrongly minimises Judaism’s belief that God required the Law to be obeyed wholly and strictly. His survey of post-AD 70 Jewish literature shows what big problems that year’s events raised for the Jews because the balance between grace and demand was now broken by the temple’s destruction. Was Israel after all chosen by God? How could Jews find salvation when the sacrifices, which mediated God’s grace to them, could no longer be offered? Yet still the Law, with its awesome demands and its condemnation of transgressors, confronted them.

Paul, who wrote before that crucial year, nevertheless saw clearly that the Mosaic covenant could not in itself convey personal salvation because he knew that the Law demanded perfect obedience. Das argues that conversion, for Paul, involved a completely new outlook, in which not only was legalism forsaken but the total structure of covenantal nomism was set aside. His whole view of the relationship between God and human beings was now totally dominated by God’s gracious action in Christ.

Has he made out his case? In many respects he has. He spends much space on detailed consideration of key Pauline passages. There are, for instance, no less than three-and-a-half pages devoted to Romans in the text index, and many of his arguments carry conviction. Yet some are questionable, particularly his tendency to downplay language in Paul which points to a sacrificial understanding of Christ’s work. In my judgement, however, this feature is not essential to the overall argument presented in this important book.