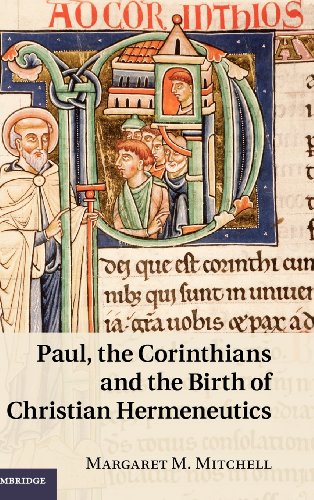 Paul, the Corinthians and the Birth of Christian Hermeneutics

Paul, the Corinthians and the Birth of Christian Hermeneutics, by Margaret Mitchell, examines the “hermeneutical impact of Paul’s Corinthian letters on early Christian exegesis” (p. ix). Mitchell analyzes Paul’s use of his canon and the conclusions early theologians drew from Paul’s practices as they considered proper uses or interpretations of Scripture.

Mitchell finds the labels “literal” or “allegorical” unhelpful, for the mark of Pauline exegesis is “strategic hermeneutical and terminological adaptability” (pp. ix, 2, 10–13, 21; cf. 1 Cor 9:22). Paul’s exegesis is like “live radio”—quick witted and improvisational. According to the purpose of the moment, he appeals “either to the letter of the text or to its deeper intent” (pp. x, 22–34). Both Paul and Gregory of Nyssa, who model their exegesis after his, interpret“in accordance with what suits them”and the benefit of their audience (pp. 3, 10; all italics are Mitchell’s).

Chapter 1 shows that advocates of allegorical exegesis such as Origen and Gregory appeal chiefly to the Corinthian letters when justifying their method, citing 1 Cor 2:10–16, 9:9–10; 10:11; 2 Cor 3:6, 1:15–16. (She thinks 1 Corinthians is one unified letter and that 2 Corinthians is five, badly arranged [8; 2.14–7.4; 10–13; 1.1–2.13 + 7.5–16 + 13.11–13; 9]). Mitchell’s “key point” is that Paul’s entire Corinthian correspondence “was occasioned and spurred on by conflict and misunderstanding” (p. 5). Throughout, Paul seeks to restore a relationship and reassert his authority despite endemic suspicion, irritation, and misunderstanding. To achieve his ends, Paul regularly cites his Scripture, but his readings are driven by missional goals, not any systematic approach. His hermeneutic is “practical, indeed tactical” (p. 16). Thus the effect of Paul’s practices on later Christian hermeneutics is “a perpetual cyclone” rather than set theories (p. 17).

Chapter 2 argues that Pauline interpretation, and therefore later Christian interpretation, varied according to the perceived benefit of one strategy or another. It could be literal or allegorical; it might appeal “to the exact wording of the text” or “to its logical meaning and practical result” according to the need (p. 20). This, Mitchell argues, is consistent with recognized principles of Greco-Roman rhetoric. Rhetoric is combat. Cicero says the wise practitioner “will convert something in [any] text to his own argument” (p. 24). This is feasible since “all texts are at least potentially ambiguous” (p. 22), for one can appeal to the context or to the words themselves, to the beneficial or destructive effects or a given interpretation (“surely this cannot mean x, since . . .”). One can appeal to the plain sense: “Even a child can see . . . .” Or one can deny the plain sense: The author “did not write for children” (p. 27). Rhetoricians learned to construct arguments to make a case—and were ready to use any method for either side of a debate. They didn’t operate from “linguistic or hermeneutical theories that represent an absolute commitment” to any theory of “the relationship between text and meaning” (p. 27). Interpreters might focus on “the author . . . the text itself [or] the reader” according to the need to “construct” this or that “textual meaning” (p. 27). Mitchell claims that Paul, Origen, Athanasius, and others operated as Cicero and Quintilian indicated, using literal and figural interpretation as necessary to make their case (pp. 29–37).

Chapter 3 explores the early church’s reception of Paul’s teaching that the spiritual do and the fleshly do not grasp his message. Chapter 4 argues that Paul sometimes insisted “upon the utter clarity of his utterances” but at other times urged his readers “to move beyond the bare letter to the deeper sense” (p. 106). Chapter 5 claims that Paul would use any helpful argument to defend his apostolic authority in the face of Corinthian criticisms.

Citing Gregory of Nyssa, chapter 6 asserts that the canon contains much that is obscure, scandalous, and even “empirically false.” Interpreters had to do “considerable violence” to Paul’s text to make it palatable and nourishing (pp. 95–97). The problems with Paul’s letters were so severe that interpretive rescue operations were “a major condition for their preservation.”Had interpreters not made his work “useful [and] honorable” his letters might have missed canonical status (pp. 106–9). “Texts do not just mean things,” and the category “clarity of Scripture” should be abandoned in favor of concepts such as struggle, accommodation, and “the ends of interpretation” (pp. 111–15).

One wonders, if “all texts are . . . potentially ambiguous” and “clarity of discourse” is an outmoded concept, why does Mitchell bother to write? If she exempts her discourse from the rule, what is the basis? But since she seems to view “clarity” more as a category error than a fallacy, we might first admire her erudition and the way she joins NT and Patristic studies. That said, we note that Mitchell’s view of canon is unusual. If people like Gregory of Nyssa (ca. a.d. 375–400) had to show the usefulness of the Corinthian correspondence to ensure its canonicity, why did Eusebius call it undisputed (homologoumena—universally acknowledged) several decades earlier? Why do scholars such as F. F. Bruce and Bruce Metzger find essentially no debate about the Corinthian letters’ canonicity in antiquity? We also wonder how much Mitchell’s view of Paul’s obscurity is shaped both by the object of her study—Paul’s dialogue with the Corinthians with their side missing—and by her extraordinary view of the disunity of 2 Corinthians.

More important, Mitchell’s denial of Paul’s clarity must itself be denied. Even Peter admitted that Paul could be obscure at times, but we could assemble a very long list of statements that defy misappropriation. Finally, Mitchell has neither demonstrated her view that Paul opportunistically uses any argument, if he can use it to win in his struggles, nor has she overthrown Pauline scholarship that sees more consistency in his work.