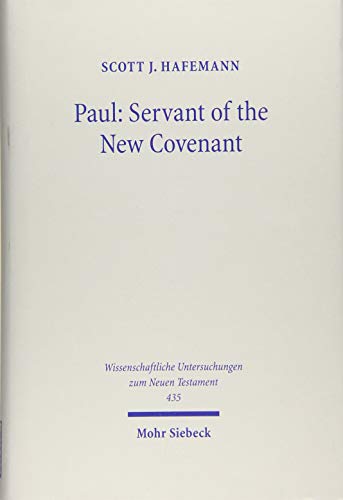 Paul: Servant of the New Covenant

This collection of essays by Scott J. Hafemann, former reader in New Testament studies at the University of St. Andrews, now retired, and author of numerous books on the Pauline corpus, builds on his earlier 1995 monograph Paul, Moses, and the History of Israel: The Letter/Spirit Contrast and the Argument from Scripture in 2 Corinthians 3, WUNT 81 (Tübingen: Mohr Siebeck, 1995). These essays seek to test the coherence of this earlier monograph’s conclusion that “Paul’s contrast between the old and new covenants is not a material, theological contrast between two distinct means of redemption … it is [rather] an eschatological, two-age contrast between the era of Israel … and the era of the church” (p. xii). Thus, he has an eye toward the specifically “theological,” “salvific,” and “conceptual significance” of the texts in view (p. xiii). In sum, he is seeking to develop “a consistently eschatological, covenantal reading of Paul’s theology” (p. 3).

In the introduction, he offers his understanding of covenant eschatology. First, Paul’s eschatology suggests “continuity in the structure of God’s covenant relationship with his people,” while “at the same time … discontinuity … between the character of his people within the two eras of this same history” (p. 9). Second, he posits that a threefold covenant structure characterizes Paul’s thinking. Given this covenant eschatology, Hafemann defends the thesis “that … the Pauline polarities” (p. 16) such as law vs. gospel or faith vs. works ought to be understood as formally distinct not materially different. The newness of the new covenant entails a renewal rather than replacement of the old.

In chapter 1, Hafemann looks at Galatians 3:6–14 in conversation with Martin Luther. He rejects the anthropological reading offered by Luther and his followers, emphasizing in turn an eschatological one. Chapter 2 explores Galatians 3–4. The author concludes that “Paul’s … ultimate concern is” the “eschatological restoration … in Christ” (p. 85). In chapter 3, he argues that 2 Corinthians 3:7–18 is the “center” of 2 Corinthians 1–9 and thus where we discover Paul’s conviction that “the new creation entails” the “new covenant” (p. 117). In his treatment of 2 Corinthians 10:12–18 (ch. 4), Hafemann insightfully argues that Paul has a divine commendation because of his “missionary work” (p. 136). Hafemann persuasively argues (ch. 5) that Galatians 4:12–20 and 2 Corinthians 4:7–12 present Paul’s weakness as grounding “his preaching” (p. 147). In chapter 6, he provocatively contends that Paul’s blamelessness in Philippians 3:6 is not “a sham, illusory” or “over-confidence,” but rather Paul’s possession of true righteousness and blamelessness pre-Christ (p. 174).

In chapter 7, Hafemann, commenting on the thorny passage of Romans 2:12–16, argues that the Gentiles in 2:14 ought to be understood as Christians and thus their “Torah” obedience “will be the criterion of final, eschatological judgment … God will use to judge those who sin” (p. 236), whether Jews or unbelieving Gentiles. In conversation with Krister Stendahl (ch. 8), Hafemann, giving attention to Romans 11, affirms Stendahl’s critique of the introspective West and its subsequent “law/gospel contrast” (p. 269) while rejecting his claim that justification by faith only applies to Gentiles. Chapter 9 looks at the OT quotes in Romans 15 as connecting “the eschatological hope of the gentiles … with the redemption of Israel” (p. 295). In chapter 10, he argues that Galatians 5–6, 1 Corinthians 7, and 2 Corinthians 5:17 reinforce the connection between the new covenant and the new creation. Hafemann concludes this monograph by comparing Paul’s thought with the ideas of the Qumran community.

By way of evaluation, three major criticisms emerge. Hafemann’s argument that the difference between the old and new covenant is not material but rather formal will not persuade everyone. It seems better to read (e.g.) Galatians 3–4 as indicating that the Mosaic covenant if taken in isolation is materially different, but that Paul argues for its necessary connection with the prior Abrahamic covenant (cf. Gal 3:17). In addition, while covenant is an important category for Paul, one wonders if it has as much interpretive significance as Hafemann gives it. Direct engagement with A. Andrew Das’s contrary position (Paul and the Stories of Israel: Grand Thematic Narratives in Galatians [Minneapolis: Fortress, 65–93]) would have bolstered this claim. Lastly, Hafemann seems to understand justification by faith as a future event. He writes, “the criterion of justification on the day of … judgment will be the faithful ‘doing the law’” (p. 359). At the very least, this obscures the past reality of justification in Rom 3–4. One wishes he had interacted with the nuanced eschatological understanding of justification offered by, among others, G. K. Beale (A New Testament Biblical Theology: The Unfolding of the Old Testament in the New [Grand Rapids: Baker Academic, 2011, 469–557]).

Despite these criticisms, this collection of essays is superb and the work of a scholar immersed in the Pauline corpus and the secondary literature. Hafemann’s exegesis, while sympathetic to the new perspective trajectory, wrestles with the text itself and is not afraid to take a dissenting or minority positon. Because he reads Paul deeply and attempts to understand the polarities in the apostle’s thinking, he is a scholar that ought to receive a wide readership as he will challenge the reader to engage Paul’s writings more deeply and thoroughly, even if one may disagree at points. To conclude, this work is highly recommended for the serious student of Paul and especially for the Pauline scholar.