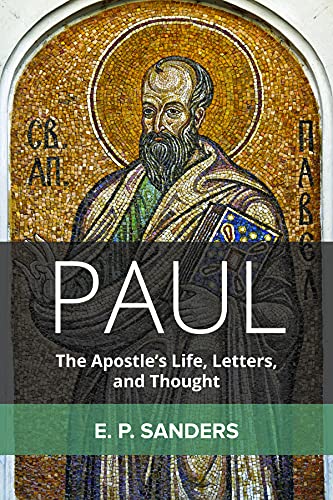 Since the works of E.P. Sanders have profoundly influenced NT scholarship, no student of Paul can afford to be without knowledge of his views. Instead of mastering Sanders’ earlier works, Paul and Palestinian Judaism(1977) and Paul, the Law and the Jewish People (1983), one can read this shorter book. It is clear, readable and succinctly introduces us to what Sanders thinks.

Chapters 1–3 introduce Paul’s mission, life, strategy and basic message. Regarding Paul’s life, the brevity of treatment does not allow Sanders to give even a rough chronology. Perhaps part of the reason is that Sanders impugns the historicity of Acts. Regarding the apostle’s mission: it created controversy, for not all agreed with his strategy and message. This controversy leads Sanders into treatment of Paul’s thought. Rather than summarizing the arguments of chapters 4–11, we shall draw attention to some of Sanders’ presuppositions and to some of his most significant points.

According to Sanders, Paul was an ad hoc theologian, a ‘backwards’ thinker. It was difficulties in Paul’s congregations which forced him to give reasons for his prior religious beliefs, to alter the tradition which he received, or even to make statements inconsistent with his previous teaching. Consequently, Paul’s arguments are not always logical, consistent or convincing. For example, the tradition Paul received taught that Jesus would return in the lifetime of the first disciples. When believers in Thessalonica died, Paul was forced to alter the tradition.

Paul inherited from Judaism a belief in monotheism and providence. According to Sanders, this belief, combined with Paul’s ‘backwards’ way of thinking, has led to a particular method: Paul reasoned from solution to plight. ‘Once he accepted it as revelation that God intended to save the entire world by sending his son, he naturally had to think that the entire world needed saving, and that it was wholly bound over to Sin’ (p. 38). Furthermore, since God wills to save all through Christ, he must never have willed to save any through the law. The purpose of the law, then, must be wholly negative: it was given to condemn. Although Paul is forced to this conclusion, he is uneasy with it, and temporarily retracts this view in Romans 7:10.

Sanders’ comments on righteousness are quite helpful. He rightly draws attention to the inadequacy of English to render the Greek with a consistent word group. He points out that Paul’s use of the Greek root dik-was at times quite different from common usage. Rather than a judicial term, it refers to the Christian’s transfer from one covenant to another. The subject matter of Galatians 2–4 and Romans 3–4, passages with extensive use of the word group, is not ‘how can the individual be righteous in God’s sight’, but rather, ‘on what grounds can Gentiles participate in the people of God in the last days?’.

Concerning Israel, Sanders believes that Paul never accuses the Jews of works righteousness. Rather, Paul faults Israel for clinging to the old covenant, not realizing that God has brought a new one. In short, they are at fault because they have not become Christians. In the end, however, all Israel, and indeed all mankind, will be saved.

The views propounded by Sanders deserve serious evaluation, for they offer us a new perspective on Paul and challenge our presuppositions with regard to the apostle’s letters. The disadvantage of this little book is that it sells Sanders short. His earlier works give him much more space to elucidate and defend his views with a great display of erudition.

While we must take seriously Sanders’ theory regarding Paul’s ‘backwards’ thinking, it is hard to swallow it completely. It is true, as Sanders claims, that people often put forward arguments in favour of a conclusion which they reached in a different way. But Sanders’ approach to Paul leaves no room for revelation and it is too quick to label tension as contradiction. Sanders calls Paul an expert exegete, meaning that the apostle was skilled in distorting the meaning of OT texts. He calls Paul creative and ingenious, although he believes he finds logical inconsistency in Paul’s various statements.

It is open to debate whether Paul distorted the OT or gave inconsistent teaching. But if one does not decide in advance that Paul’s teaching is riddled with contradiction, one will then not need to think ‘backwards’ and produce arguments or evidence to prove these contradictions.

In conclusion, while the student of Paul should know what Sanders thinks, they should keep in mind this question: Does Sanders know what Paul thinks?