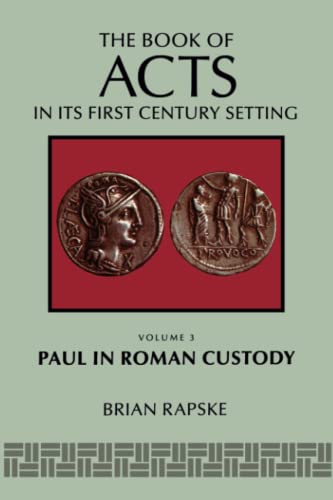 Paul in Roman Custody. Vol. 3: The Book of Acts in its First-Century Setting

Although there are numerous monographs on various aspects of Paul in Acts, we have not had a published full-scale analysis of the realia of Paul’s imprisonments in spite of the fact that the narration of Paul’s periods of custody consumes almost a third of Acts (16:19–40; 21:31–28:31). Brian Rapske has filled this lacuna with a revision of his Aberdeen dissertation written under the direction of Ruth B. Edwards. Readers are introduced to the greatest strength of the work in the first chapter where Rapske lays out his agenda. He follows the methodological lead of F. Millar by looking for evidence of social history in all types of ancient literary and non-literary material. He uses the same industry in reading and evaluating secondary literature. The final product is an exceptionally rich repository of data. Fortunately, Rapske provides a summary of his findings in the last chapter (16) which might profitably be read after Chapter 1.

Rapske organizes the body of the work into three major units subdivided into 14 chapters. The first unit, ‘Custody, the Legal System and Status in the Roman World’, explores the dynamics of imprisonment in the Roman world including the purposes and severity of custody (Ch. 2), the role of the magistrate with particular attention given to the impact of the social status of the parties (Ch. 3), and the implications of Paul’s triple citizenship (Ch. 4). The last is the most problematic with its affirmation of all three citizenships, although Rapske could have cited parallel examples, e.g. the family of Philo of Alexandria who were citizens of the Jewish community, Alexandria, and Rome.

The second unit, ‘Paul on Trial in Acts’, takes up and analyses the details of each of Paul’s custody arrangements: in a yet unidentified prison in Philippi (Ch. 5), in the officers’ quarters of Antonia in Jerusalem (Ch. 6), in the recently discovered praetorium of Herod in Caesarea (Ch. 7), and in a private residence in Rome (Ch. 8). One of the most interesting areas of Rapske’s analysis is his explanation of Paul’s delayed appeals to Roman citizenship when facing corporal punishment. He argues that Paul carefully thought through the issue of disclosure and only did so when it would not compromise his Jewishness or missionary concerns.

The third unit, ‘Paul in Prison in Acts’, examines the physical realia of Paul’s imprisonments. Rapske begins by examining the conditions of prison life, e.g. he points out that prisoners generally supplied their own sustenance (Ch. 9). He then considers the more humane arrangements at Rome, arguing that Paul resided in a third floor apartment and had access to the grain dole (Ch. 10). He returns to prisons by considering prison personnel and inter-prisoner relationships (Ch. 11). Chapter 12 is Rapske’s bow to social science methodology, focusing on the shame of imprisonment. He resumes his more customary social descriptive method in the next chapter by exploring the reasons for extended imprisonments and prisoners’ pastimes (Ch. 13). Chapters 14 and 15 set out the evidence for Paul’s human and divine helpers.

There are several problematic aspects of the work. First and most importantly, Rapske fails to take into adequate account the shaping of the narrative by the evangelist. It is one thing to demonstrate—as Rapske has done very capably—that the evangelist’s presentation of prison life is accurate; it is another to assume that this presentation concurs in detail with tire historical events of Paul’s life. Readers would do well to balance Rapske’s methodology and historical conclusions with those of two recently revised dissertations which touch on related material: H.W. Tajra, The Trial of Paul (1989) and John C. Lentz, Luke’s Portrait of Paul (1993). Second, the length of the book is out of proportion to tire importance of the topic; the same contribution could have been made in far less space. Finally, there are a number of bothersome typographical errors especially in the Greek, duplications of bibliographical information in the notes, and page headings in Chapter 14 which actually belong to Chapter 2.

Even with these strictures in mind, one understands why the editors accepted this work for the significant series in which it appears. It is a work of great industry and learning. It has measurably enriched my reading of the narrative of Paul’s imprisonments.