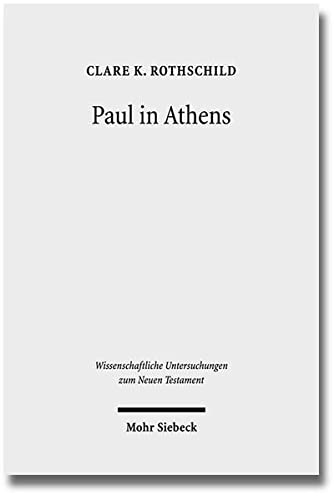 Paul in Athens: The Popular Religious Context of Acts 17

Critical commentators on Acts frequently note the possibility that in Paul’s Areopagus address (Acts 17:22–31) Paul may be quoting the 6th century BCE Cretan seer Epimenides when he says: “in him we live and move and have our being” (17:28a). Some also note the relevance of Epimenides who purified Athens when he set up altars for an unknown god on the Areopagus as context for Paul’s claim to have observed an altar set up for an unknown god (17:23). In Paul in Athens Rothschild claims, however, that Luke not only has Paul cite Epimenides but “fashions his portrait of Paul in Acts on a variety of popular traditions about him” (p. 133). Interpreters of Acts 17 have been too distracted with the presence of the Hellenistic philosophers (17:18a), particularly the Stoics and Stoicism, to see that “the most logical explanation of the apparently ad hoc components of Paul’s visit to Athens . . . is the nexus of traditions crystallized around the figure of Epimenides in the second century C.E.” (p. 4). Luke draws on popular religious topoi related to Epimenides in order to facilitate Luke’s agenda of “cult transfer—an aim spanning the entire narrative of Luke-Acts, although focused in Luke’s portrait of Paul” (p. 6).

In ch. 2 Rothschild seeks to establish through an examination of the early reception history of Acts 17:28a that Paul is citing Epimenides. At best, I think Rothschild shows that this is a possibility but it is far from certain. Rothschild suggests, however, that its plausibility is bolstered when one recognizes the similarities between Paul and Epimenides: “For Luke, both Paul and Epimenides are strangers from afar summoned to Athens to fix a mistake; both announce that the tomb of their god is a lie; and, both transfer eastern cult traditions to Greece through Asia” (p. 24). Chapter 3 presents Rothschild’s presentation of the Greek text and translation with copious notations justifying her translational decisions. One can see something of her particular agenda as any potential for hostility or criticism in Paul’s speech is toned down. Paul is “stirred” (not “provoked”) when he looks at the city “chock-full of monuments” (instead of “idols”). The men of Athens are addressed as “extremely devout in every respect” (not “superstitious”). Paul calls everyone to “acknowledge” (not “repent”).

Chapter 4 provides a valuable discussion of the Epimenides and the traditions attached to him (i.e., the Epimenidea). Rothschild draws upon Plato, Aristotle, Diogenes Laertius, and 2nd century anecdotes to paint a picture of the seer as a legislator, religious guide, miracle worker, and purifier of Athens. Chapters 5 and 6 are the heart of Rothschild’s argument, and here she reads the Areopagus speech (17:22–31) and draws upon the Epimenidea to support some of her observations. Rothschild suggests that Paul chooses the unknown altar as the major object in the speech in order to find common ground with his audience. Given that this unknown altar and inscription “would have recalled Epimenides” Paul “could have expected ‘Areopagites’ to welcome a reappearance of their old friend” (p. 53). Given that Epimenides purified Athens from the plague, their reception of Paul is highly positive and favorable. Rothschild claims about Paul’s persona are bold as she reflects on the likelihood that Paul quotes Epimenides in Acts 17:28: “If Paul can appear as a reincarnation of Christ in Galatia, the Lukan Paul can appear as a reincarnation of Epimenides in Athens—particularly if one of the aims is to break Greek resistance to bodily resurrection” (p. 73). Moreover, Rothschild does not see Paul as criticizing the Athenians for idolatry in 17:22–31: “On the contrary, he [the Lukan Paul] interprets one such ‘idol’ as representative of and dedicates to the god he wishes to reveal and extol” (p. 75). The Athenians would not have been surprised, Rothschild suggests, to hear Paul speak of resurrection since “resurrection is precisely that proof they would have anticipated, since it was the hallmark trait of the prophet (i.e., Epimenides) issuing the warning” (p. 76). Rothschild is speaking here of the tradition that Epimenides fell asleep for 57 years in a cave. To sum up: “In his Areopagitica, the Lukan Paul anticipates objections to his gospel (e.g., polytheism, idolatry) by accentuating similarities rather than differences with Greek piety” (p. 80). In ch. 7 Rothschild seeks to support her case by showing correspondences between or points of contact between Acts and Epimenidea. I confess that I find most of the similarities to either be quite general or strained. Whether Paul’s three days of blindness parallels Epimenides having fallen asleep for 57 years and justifies a common point of contact of “divine incubation” I will leave to the reader to judge. I am perhaps most suspicious, however, of seeing any significant parallels between “resurrection” and Epimenides’s awakening after his long sleep. In Rothschild’s final chapter she argues that the spread of the gospel in Acts conforms to traditions of cult transfer narratives and claims that Acts 17 conforms to this theme in order to “set forth a smooth succession of the leadership of nascent Christianity” (p. 120).

Rothschild has proved herself to be one of the most creative and learned North American scholars carrying on the legacy of the study of early Christianity from a history of religion standpoint. There is much to learn from her in this study about Epimenides and, more broadly, about the incredible potentiality this speech in Acts has to resonate with numerous ancient religious and philosophical traditions. All interpreters of Acts should give careful listen, particularly, to the particularly resonances between Acts 17:23 and 28a and Epimenidea. Similarly, although her interaction with scholarship on cult transfer narratives seems too indebted to her University of Chicago background (see John Weaver’s important work Plots of Epiphany: Prison Escapes in the Acts of the Apostles, BZNW 131 [Berlin: de Gruyter, 2004]), I do not doubt the legitimacy of invoking this ancient practice for explaining both opposition and success of the early Christian movement in Acts.

There are, however, a number of problems with Paul in Athens. Rothschild has, in my opinion, drastically underestimated Paul’s critique of the Athenians for their ignorance and idolatry. I was disappointed to see no interaction, for example, on this point with C. Kavin Rowe, World Upside Down: Reading Acts in the Graeco-Roman Age (Oxford: Oxford University Press, 2009). Similarly, the downplaying (or denial) of clear resonances with Socrates in 17:16–21 diminishes the strength or plausibility of her interpretation of the narrative frame. Rothschild is trying to move away from the dominance of philosophical categories for interpreting the speech, but given that the speech has resonated with so many philosophical critiques of superstition Rothschild probably needs to justify her translation of the disputed term as “extremely devout” instead of “superstitious.” While too many throw around the language of parallelomania as an excuse for avoiding the religious context of the early Christian writings, I also felt too many unconvincing parallels were drawn between Acts 17 and traditions related to Epimenides, a few of which I have already mentioned above. Thus, while Rothschild has helpfully called renewed attention to the relationship between Epimenides and Acts 17:23 and 28a and has provided a learned volume filled with interesting insights I find myself not convinced of the larger argument that Luke depicts Paul as Epimenides.