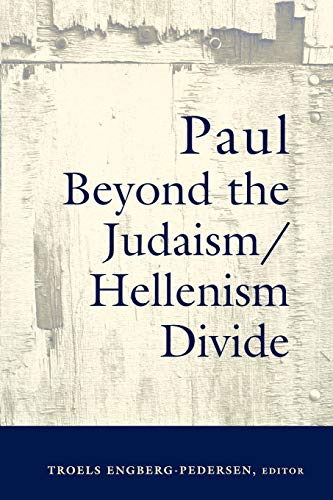 PAUL BEYOND THE JUDAISM/HELLENISM DIVIDE

This is going to be an extremely important book. Troels Engberg-Pedersen has recently become a powerful voice in Pauline studies (primarily with his monograph Paul and the Stoics), and has now edited this fascinating collection of essays arguing that the traditional opposition of Judaism versus Hellenism needs to be fundamentally rethought. This is the central idea of a book that is brimming with ideas that orbit around that centre.

After an introduction by the editor, which gives a very useful summary of the strategy of the book as a whole, there are three essays that highlight some of the ways in which scholarship has historically used and abused the concepts of Judaism and Hellenism. The first is Wayne Meeks’s essay, ‘Judaism, Hellenism and the Birth of Christianity’. Next, Dale Martin’s ‘Paul and the Judaism/Hellenism Dichotomy: Towards a Social History of the Question’ presents brilliantly the way ‘Judaism’ and ‘Hellenism’ can actually be used as symbols. We are familiar with Judaism representing Roman Catholicism, or Hellenism representing human wisdom. But Martin shows how at different times in history Hellenism stands (for example) for both nationalism and anti-nationalism, while Judaism has similarly symbolised completely opposing ideas (58–59). Philip Alexander’s essay, ‘Hellenism and Hellenization as Problematic Historiographical Categories’ shows further how in some scholarship around the 15th and 16th centuries ‘there often seems to be implicit in their history … a contrast between Hebraism (which is good) and Judaism (which is bad)’ (64).

There is also a series of case studies looking at how questioning the Judaism/Hellenism division affects the interpretation of Paul, with a particular focus on 1 Corinthians: Stanley Stowers, ‘Does Pauline Christianity Resemble a Hellenistic Philosophy?’; Loveday Alexander, ‘Citation of Authority in Paul and in the Jewish and Hellenistic Schools’; Wayne Meeks, ‘Corinthian Christians as Artificial Aliens’; Henrik Tronier, ‘The Corinthian Correspondence between Philsophical Idealism and Apocalypticism’; David Aune, ‘Anthropological Duality in the Eschatology of 2 Corinthians 4:16–5:10’; and John T. Fitzgerald, ‘Paul and Paradigm Shifts: Reconciliation and its Linkage Groups’. The highlights of this section, however, are essays by Margaret Mitchell and John Barclay.

Mitchell’s essay, ‘Pauline Accommodation and “Condescension”: 1 Corinthians 9:19–23 and the History of Influence’, examines Paul’s strategy to be ‘all things to all people’ and has a distinctive focus on the church fathers. She notes that, while they are not infallible interpreters, because of the closeness of many of the early fathers to the culture of Paul they can provide us with interpretative hypotheses to test (213). This leads her to ask: ‘If Paul were self-consciously making reference to well-defined and discrete Hellenistic traditions or commonplaces in 1 Corinthians 9:19–23, is there any trace of recognition of this in the writing of the early Christian interpreters who commented on these verses?’ (201). She notes a consistent tendency among some early readers to draw analogies between Paul’s adaptability and God’s condescending accommodation to Israel in the OT as well as in the incarnation.

Barclay’s essay, ‘Josephus’ Constitutional Ideal and Paul’s Strategy in Corinth’ raises a number of key issues, such as the need not just to make comparisons, but also to ask which comparisons are actually socially significant (140). In terms of Paul’s thinking, Barclay makes a vital point against many scholars, that the apostle’s prohibition of idolatry and adultery are not simply overhangs from his Jewish past. For Paul (in 1 Cor. 8:5–6 and 1 Cor. 6:12–20) there are distinctively Christian reasons for these positions (151–52).

Thus far I have focused very much on the positive aspects of the volume. There are also occasions, however, when the book gives serious cause for concern. Among the historiographical chapters, Dale Martin’s essay can seem at to be something of a witch-hunt against those who give the slightest hint of having prised Judaism and Hellenism too far apart. Another problematic point is his heavy fire against the impression given in Hengel’s work of Judaism being ‘preparation for the gospel’ (praeparatio evangelica). Martin thinks that simply to raise this issue is to invite us to ‘boo’ Hengel. In fact, of course, ‘preparation for the gospel’ is precisely what the OT is, according to historic Christianity. In a similar way there is a sense in the first three essays at times that merely to identify oppositions that have been at work in scholarship (such as Hebraism versus Judaism) is automatically to expose them as suspect. Also, concerns with Jewish background in German and traditional Anglo-American scholarship are almost invariably viewed with some suspicion, and the book would have benefited from an analysis of factors such as the holocaust, or the discovery of the Dead Sea Scrolls, both of which prompted a huge upsurge of interest in the Jewish context of the NT.

This volume is a trailblazing book which any research student or scholar working in Paul will ignore at their peril. (The material here will probably not be particularly useful to the undergraduate student.) Even if there are a lot of rough edges in the book, Paulinists will need to be alert to the issues raised here, or else risk making statements that will offer numerous hostages to fortune.