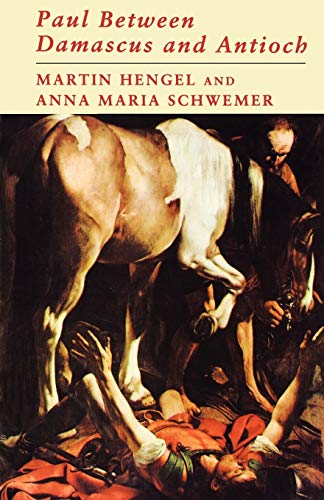 Paul Between Damascus and Antioch. The Unknown Years

This book is a follow up to Hengel’s The Pre-Christian Paul. It is a remarkable achievement of historical depth and scholarly erudition which squeezes every last drop of information from the relative paucity of extant evidence for the context and the life of Paul between his conversion and the end of his Antioch based ministry. The reader is treated to a wealth of information concerning Damascus, Arabia and the Nabataeans, Tarsus and Cilicia and finally Antioch, a moving tapestry into which the life of the apostle is finely woven. To this is added four excursuses, the most useful of which is that dealing with proselytes and godfearers, where a middle way is steered between the polarised positions of Martin Goodman and Louis J. Feldman.

The major burden of the study is the importance of this period in the development of early Christianity and Paul’s own thought and mission to the nations, which, it is argued, began within days of his conversion, not much later. Therefore, Antioch is not the seedbed of any putative ‘Hellenistic’ Christianity, and the evidence pertaining to the Damascus Antioch period disallows much on which the thesis of a separation between Palestiniai Jewish Christianity and (post-) Antiochene Hellenized Christianity is based. Other influential these and scholarly assumptions, that for example, Luke is thoroughly tendentious and historically unreliable or that the time in Arabia (Gal. 1:17) and the geography of Paul’s travels in this period are without theological and eschatological significance, are shown to be historically wrong-headed and erroneous.

As we have come to expect from the older of the two authors (Hengel), the historical inquiry is not only sound and level-headed, it is also seasoned with imaginative and original suggestions. Several factors, however, militate against the usefulness of this book. Hengel responds almost entirely to older, German scholarship emanating from tire (first) history of religions school which was championed by Bultmann and his pupils. Interaction with European and North American discussion, which in the last twenty years has set the agenda in Pauline studies, is minimal. There is a remarkable lack of attention to the new perspective on Paul: a passing rejection of one minor brick in E.P. Sanders’ edifice (p. 382 n. 522) and no interaction at all with the likes of Dunn, Hays and Wright who have taken the new perspective in a decidedly constructive direction after Sanders’ deconstruction. The work is historically strong, but theologically weak and, from this reviewer’s viewpoint, the adherence to the pre-Sanders view of Pauline theology will soon seem very dated.