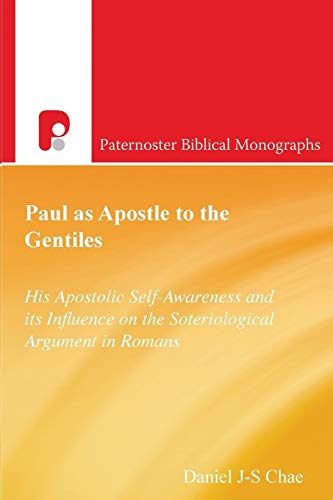 Paul as Apostle to the Gentiles: His Apostolic Self-Awareness and its Influence on the Soteriological Argument in Romans

This book contains the results of work undertaken at London Bible College for which the author was awarded a PhD degree by Brunel University in 1995. The work has been revised for publication in the Paternoster Biblical and Theological Monographs series.

The thesis of the book is that in Romans Paul argues for the equality of Jews and Gentiles, an argument Paul mounts for the sake of the Gentiles and which springs from, and is controlled by, his self-awareness as apostle to the Gentiles. It comes as no surprise that Chae believes Romans 15:14–21 (where Paul links his purpose in writing Romans to his apostolic calling) is the interpretive key to the letter. Paul says he has written boldly (vis-a-vis contemporary Jewish beliefs) about the equality of Jews and Gentiles.

The greater part of the book is devoted to careful exegetical work on chapters 1–11, conducted in conversation with a wide range of secondary literature. In 1:18–3:20, Chae argues, Paul demonstrates the equality of Jews and Gentiles in sinfulness which leads the apostle to make an indictment of Jewish complacency. In 3:21–4:25 Paul argues that, just as Jews and Gentiles are equal in the matter of sin and judgment, so they are equal in the matter of justification. By this means Paul demonstrates that Gentiles are also included in God’s justifying grace. Chae interprets 5:1–8:39 as an exposition of the equality of Jews and Gentiles in their new status in Christ. His treatment of this section of the letter is quite brief because it is not central to Chae’s thesis. The section, 9:1–11:36, receives the greatest amount of attention and constitutes, in my opinion, the most valuable contribution made in the book. Chae argues that Paul’s focus in these chapters is still upon the equality of Jews and Gentiles, in this case their equality in God’s plan of salvation. Chae rejects post-holocaust interpretations of Romans 9–11 which argue that it is God’s faithfulness to ethnic Israel that Paul emphasises, in favour of his own view that these chapters undermine Jewish complacency and affirm the Gentiles’ new status in Christ in order to bring about a balance. All this springs from Paul’s self-awareness as apostle to the Gentiles. Paul asserts boldly that the full number of the Gentiles will be saved before ‘all Israel’ (interpreted as ‘all believing Israel’) is saved, thus reversing the earlier Jewish priority in mission.

The strong points of Chae’s work, in this reviewer’s opinion, are: (i) his demonstration that Paul’s insistence upon the equality of Jews and Gentiles in sin, justification, their new status in Christ, and in God’s salvific plan is a bold defence of the Gentiles’ equal share in God’s grace; (ii) his argument that all this is coloured and controlled by Paul’s self-awareness as apostle to the Gentiles. This is a fine book, exhibiting an ability to carry out independent exegesis while interacting with a wide range of contemporary studies of Pauline theology. It is a book from which all students of Paul’s letter to the Romans will benefit.