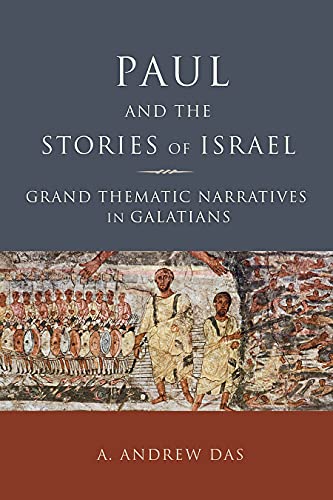 Paul and the Stories of Israel: Grand Thematic Narratives in Galatians

Composed of essays interacting with different scholars, Paul and the Stories of Israel (PSI) means to provide “a more critical examination” (p. 28) of supposed narratives lurking beneath the text of Paul’s letters. Interacting exclusively with Paul, Das intends this book to be a sort of clarion call for the entire field of NT studies: “this volume is a call for sobriety and methodological rigor in the recognition and analysis of grand thematic narratives—to escape the sirens’ summons and the interpretive shipwreck on the shoals” (p. 31). Scholars, especially from Britain and America, have been too quick to find stories of Israel as the backdrop of the New Testament, especially the Pauline Epistles, and have succumbed to what Seyoon Kim (invoking a term coined by Samuel Sandmel) calls “parallelomania” (pp. 31, 215). Das wants to disabuse readers of this temptation and model a more reflective, analytical exegesis.

Das directs his critique towards six prominent “grand thematic narratives,” devoting one chapter to analyzing each. The majority of these narratives reflect stories found in the Hebrew Bible/Old Testament, and the sixth one concerns an anti-imperial narrative that supposedly arises from Paul’s Roman context (pp. 179–215). The five Old Testament “grand thematic narratives” that Das identifies as particularly pervasive are these:

In each essay, Das provides a careful overview of the arguments for finding a “grand thematic narrative,” itself a nebulous concept that scholars have had difficulty defining, to test out their stability as plausible readings. Showing his skill in several different fields, Das finds each reading ultimately without warrant and therefore unnecessary. While each narrative has its unique weakness, Das finds them all guilty of a certain kind of chronological snobbery where the older, calmer methods of biblical exegesis are not proved wrong but discarded as boring. In order to quicken their pulses, scholars may resort to all sorts of exciting, but indefensible, interpretations.

There are too many strengths in PSI to name them all. Overall, Das has provided a remarkable and penetrating critique of many current fads in New Testament studies that have not received the criticism that they likely deserve. He displays sobriety, precision, and judiciousness throughout, carefully evaluating what may be considered worth-while evidence for any sort of “grand thematic narrative.” For this reason alone, Das’s book should be required reading for anyone working or hoping to work in the field of New Testament studies. This is only doubly so if one is hoping to learn how to read the New Testament in light of the Old. Grand thematic narratives are persuasive in large part because of their advocates’ familiarity with the Old Testament, presenting a coherent reading of Scripture that, ostensibly, seems to honor the unity and coherence of the Bible. However, one must be careful not to get ahead of themselves. Following Das’s exegesis and paying close attention to his argument will prove helpful to those examining New Testament texts and their Old Testament backgrounds.

Another great strength to the book is when Das proposes for a more tempered narrative reading. Prior to writing PSI, Das published an 800–page commentary on Galatians. The rewards of that labor are evident as he unpacks sections of Paul’s little epistle. The unique format of the book allows for insights to arise out of his polemical engagement with other scholars. For instance, as he examines arguments for reading the Aqedah as a backdrop to Paul’s soteriology, Das makes a convincing case for reading Paul’s soteriological statements in Galatians as subversive to, rather than reliant on, the Aqedah traditions that had developed in Second Temple Judaism.

That being said, the book is not perfect. Because it is more like an essay collection than a single unified thought, PSI is uneven as a whole. The essay dealing with Donaldson and Wright is particularly strong and helpful in its critique. The weakest essay, on the other hand, is his interaction with covenantal readings of Paul. Though he is certainly right to push back against some aspects of covenantal interpretations, some of Das’s critiques will seem flat to readers who are already more covenantal in their approach, and his positive proposal leaves only more questions rather than answers. Also, because PSI is composed largely of negative assessments, readers will often find themselves wondering what Das would suggest as an alternative or a more persuasive “grand thematic narrative,” since he obviously finds the category helpful. In his conclusion, he gives a qualified “Yes” to Matthew Harmon’s reading of the Suffering Servant but remains unsatisfied overall with any of the preceding narratives.

Das has done scholars and students a remarkable service by writing this book. Those who learn from Das will only be better exegetes. If PSI receives the readership it deserves, especially younger scholars, then future studies in New Testament may be able to move beyond some of the more fantastical readings and return to the rigorous, disciplined tools that characterize good interpretation.